Navy Pier and AMC announced on Tuesday that the Pier’s IMAX (NYSE: IMAX) movie theater is reopening for the holiday season under the management of AMC.

The theater had been closed since August of this year for upgrades to the IMAX projection system, and will close again in early 2017 for several months for the installation of IMAX’s immersive 12-channel sound system, a renovated concessions area and new rocker seating.

The new sound system coming next will year will include 12 discrete channels of sound to improve the sound system’s ability to position sounds around the theater and provide an immersive sound experience for the audience. The theater already is equipped with IMAX’s state-of-the-art laser projection system.

Noted Mark Welton, president IMAX Theatres: “Our longtime partners at AMC share our commitment to providing moviegoers a truly unique and cutting-edge experience, and we’re excited to take that even further with the launch of our new laser system at Navy Pier.”

Added Navy Pier CEO Marilynn Kelly Gardner: “As Navy Pier continues to create unparalleled experiences for our guests, we are proud to work with AMC and IMAX to provide a state-of-the-art movie-going experience at the Pier.” The upgraded movie theater is part of a multi-year revamp of Navy Pier and its tourist offerings coinciding with the Pier’s 100th anniversary this year.

The reopening of the IMAX theater also coincides with news that AMC (NYSE: AMC) has acquired the Carmike Cinemas chain, making AMC the largest movie theater operator in the United States. The Navy Pier IMAX at AMC, as it now will be known, reopens with an engagement of “Fantastic Beasts and Where to Find Them” starting Thursday. 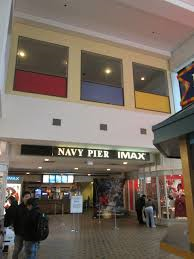