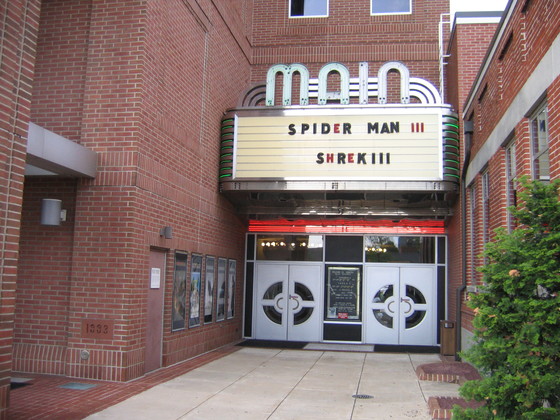 From The Ephrata Review: Ephrata Main Theater owner Steve Brown understands that movie studios these days would like to release straight-to-home movies and even run movies exclusively in bigger markets.

“I mean with Netflix and all these things, the national trend is down overall for all movie houses,” he said.

And that, coupled with Hollywood’s 64 percent cut on all ticket sales, is the first part of the equation that leaves Steve and his wife Karen Brown at a crossroads for the future of their movie theater business.

He realizes that people are particular how they spend their money and “want blockbusters, good plots and good stories and entertainment.”

But the challenge is more specific to the Ephrata Main survival, one of the last remaining small-town, two-screen, theater gems “that are disappearing one after another.”

The Main had been averaging around 30,000 customers annually when the Browns financed a $125,000 digital conversion three years ago that included two projectors and software.

Ticket sales last year dipped to about 22,000 and revenue, from $8 admission tickets, has fallen short of the cost of financing the digital conversion which has three years left to pay off.

“The film companies got the savings when we converted from film to digital but we’re the one who got the added expense,” Karen Brown said.

Maintenance on the new digital equipment is cost prohibitive compared to film as the Browns recently replaced a pair of projector bulbs at a cost of $2,500 each.

Brown said he hoped to come to an understanding with the local community if it’s interested in maintaining the Main.

“I was very, very adamant three years ago coming to the community saying ‘I know how to do this, I can do this, but you’ve got to keep coming,” he said.

“If ticket sales had stayed the same, we would not be having this conversation,” said Steve Brown. “The problem is admissions were down from 30,000 to 22,000 last year and this year is not over but they’re down again this year.”

The Browns in the past have used revenues from its other business, Lily’s Restaurant, to offset the Main losses. But Lily’s, which was established 19 years ago, can no longer cover those costs,” he said.

That leaves only one “very quick solution” to keep the Main open alive, and that is to get the admission up to 30,000 a year,” Steve Brown said. “To get there, customers can’t see just The Hunger Games and Star Wars, you can’t just see two movies per year. It doesn’t work.”

The Browns say Ephrata Borough and Downtown Ephrata Inc. have been very supportive and sincerely want the Main to continue in operation. The building, which houses both Lily’s and the theater, is leased to the Browns by Windstream.

Borough Councilwoman Susan Rowe, the Council Liaison to the DEI Board, said hope may be on the way and that some new initiatives may be available soon.

Meanwhile, the borough cannot use taxpayers funds to support a business, she said.

“That does not mean the volunteers that sit on council are not supportive of the businesses in the borough, including the Ephrata Main Theater,” Rowe said. “The borough had initiated a restricted Economic Development Fund a few years ago with a clear plan for seed money for the fund and methodology to keep the fund balance healthy. The borough council recently hired a consultant…to assist the three main non-profit groups.”

One other possible solution for the Main would be to sell on-screen business commercials which they offer for an annual fee of $2,500.

“If we were to sell 10 ads per year it would pay the (lease) on the projectors” Karen Brown said.

So far, Windstream is the only local business to step up to purchase an ad.

The Browns, who began operating the theater in 2010, remain committed to bringing first-run movies to the theater. They’ve also offered live theater, music, concerts and special events are performed on stage.

Concessions at the Main offer reasonable prices, such as a kids snack pack with popcorn, soda and candy for $6. Popcorn was $4 and up, nachos were also $4. A big soft pretzel was $3. There were all the usual sodas, along with French sodas with fresh fruit flavors.

But what is truly unique about the Main is a “grownups” menu offering a glass of wine, including a selection of chardonnay, pinot grigio, rose and claret. There are also cocktails, like frozen Fifty Shades of Grey Goose, strawberry Margarita and frozen Manhattan.

Steve, who is chef and manager at Lily’s on Main, selects the wines and comes up with cocktail ideas. The theater has also been a staple for Ephrata High School grads who attend the schools after prom there.

The ambiance of the Main harkens back to 1938, when the Main Theater opened at 124 E. Main St. It was owned and operated by the Stiefel Brothers Roxy Theater Circuit. By the 1980s, the glorious Theater was a fading star, showing second-run movies. Worn and dilapidated, it closed in May 1990.

But there was hope. The Theater building was purchased by the local Denver and Ephrata Telephone Company. Engineers determined that renovating the theater would not be possible. A new theater was included in plans for the new Brossman Business Complex. Many of architectural and design features were preserved. In November 1993, the Main Twin Theater reopened. One Theater was called the Grand with a stage for live presentations, while the other is the Roxy, both named after former Ephrata theaters.

“These seats have the original monogrammed gold-leaf seat frames,” he said. “If I alter those and start drilling into the wood, people are going to get mad at me.”

The theater also maintains its red and gold theme, giving the feeling of the gilded age of movies with a modern vibe. The neon wall lights in the original Theater were restored and are used in the two new theaters.

The Browns say they want to continue the tradition established over the years. But that may require some thinking outside the box.

“We’ve open up for free on Black Friday when Santa comes to town with (movies) ‘It’s a Wonderful Life’ and the ‘Grinch’,” Brown said. Maybe it’s time we maybe want to pass the hat or something.” 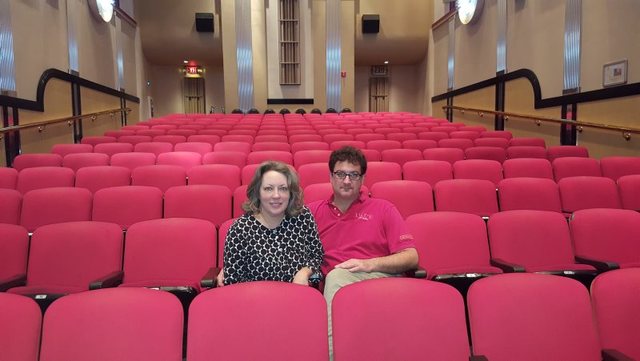 Just another reason why I, a film projectionist of 40 years, hates digital.

I am sure that having 15 screens including a 420 seat IMAX just nine miles up the road in Lititz PA does not help.