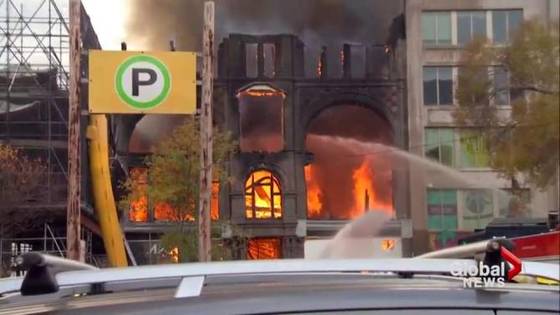 From TheStar.com:
A massive fire appears to have caused extensive damage to a Montreal building famous for having housed Canada’s first-ever movie theatre.

Fire crews responded to the blaze at 974 St. Laurent Blvd. on Thursday morning but were forced simply to contain the inferno and prevent it from spreading to other buildings in Montreal’s Chinatown district.

What started out as thick black smoke quickly turned into hot, bright orange flames licking out the windows and eventually breaking through the building’s roof. Shortly before noon, a brick wall crumbled and fell under the intensity of the fire. It was followed by a loud boom from an unknown source.

As fire crews trained their hoses on the blaze, a white smoke filled the skies above downtown Montreal, forceing many passersby to cover their mouths and noses.

The commercial building, known as Edifice Robillard, is a designated heritage site.

“It’s a four-storey commercial building whose fame is well hidden — that of housing the first interior cinematographic projection in Montreal on June 27, 1896,” reads an article published by the City of Montreal about the building’s historical importance.

The building was constructed at the end of the 19th century in an area frequented by the “francophone bourgeoisie.”

The building housed the “Gaiety Museum and Theatorium” in 1891, which included a sort of wax museum and a small stage capable of welcoming a 300-person audience.

A few years later it became the Palace Theatre, a site for vaudeville acts.

On June 27, 1896, a Frenchman, Louis Minier, established it as the first interior movie theatre in Canada — and just in time. Two days later, a movie theatre would open in New York. Paris had opened its first movie theatre just six months earlier. It beat Toronto to the punch by just a few months: On Aug. 31, 1896, a series of films lasting a minute or so each were shown at Robinson’s Musee Theatre at Yonge and Adelaide.

The Montreal theatre didn’t last long, however. The following year it was converted back into a live theatre. Later it became a telephone centre before being converted into a commercial use. 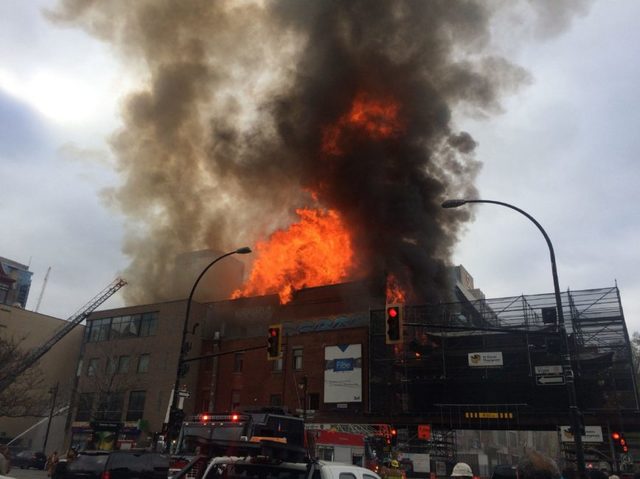 i’m sure it was what we refer to in NYC as
as “business fire”.