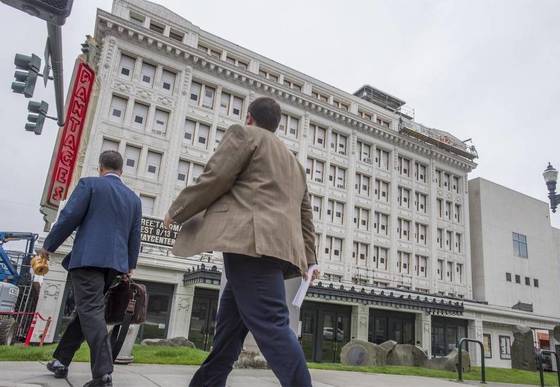 Those are some of the additions the Broadway Center is planning as part of the 2018-19 restoration of the 1918 Pantages Theater.

But first it must raise the final $6.5 million of a $24.5 million budget to pay for it. That campaign will kick off Monday in the Pantages lobby with a presentation, design previews and a sample of the new seats.

“We are setting up the Pantages to serve the South Sound community for the next 100 years,” said Sara Kendall, campaign chairwoman and board member for the Broadway Center, which manages the city-owned Pantages, Rialto and Theater on the Square.

“We want to keep it as a citizens’ asset, but we need to involve the whole community (in fundraising).”

Kendall and Broadway Center Executive Director David Fischer say they hope most of the remaining $6.5 million will be raised before construction starts on the historic theater in May 2018.

Any gaps are expected to be filled from money raised through 2019 from donors rewarded with their names noted on their seats.

The Pantages and the adjacent Theater on the Square are to reopen in October 2019, Fischer said.

Exterior work on the building — costing $2 million and completed over the summer — included cleaning, new windows, terra cotta repair and a paint job, including the bright red blade sign.

Other elements of the restoration already announced include:

▪ Seismic refitting in a new design by the Tacoma design-engineering firm AHBL that lowers costs to $8.3 million.

▪ New seats for both theaters that will enhance acoustics, as well as a seat redesign in the Pantages with a center aisle and narrower rows that adds 140 seats to the 1,160 capacity, plus redesign of box seating.

▪ Restoration of plaster and paintwork.

▪ New light fittings for the house.

▪ A 14-foot, two-story extension to the building in the loading zone between the Pantages box office and stage door, allowing for quicker and cheaper set loading.

▪ Custom-built acoustic shell for the Pantages stage, with costs possibly shared by the Symphony Tacoma.

▪ An improved lobby for the Theater on the Square, including a door leading to the park area (which eventually might be redesigned), more restrooms and a permanent exhibit on civic leadership in Tacoma.

New to the restoration plans is $1.1 million for outfitting the Armory for performances during the Pantages’ closure.

Originally dropped as too expensive, work on the historic brick building at 715 S. 11th St. will include modifying its steep loading ramp, plus additions inside to improve the boomy acoustics. These could range from baffles to drapes to spray-on acoustic foam, said Fischer, who doesn’t know the details.

The fund will pay for portable equipment such as seating, risers and lights that can be used in other venues.

It also will offset financial losses for the two resident arts organizations that might use the venue — Symphony Tacoma and the Tacoma Concert Band — and the Broadway Center itself.

The Armory is owned by developer Fred Roberson, but its street-level drill floor is managed by the Broadway Center, and Roberson has promised to donate the building to the nonprofit center in his will.

In addition, he has installed more restrooms on the drill floor level and is working to renovate the northern end into dressing rooms and a green room by 2018.

Yet, as Fischer acknowledges, the building wasn’t built for instrumental acoustics.

“It’s pretty bad right now,” said Robert Musser, director of the Tacoma Concert Band, who held a trial rehearsal there in October. “The acoustics are really poor for any large ensemble: too bright, too loud, too harsh and hard to hear lines.

“I’m sure there’s a way to make it acceptable, with enough money.”

Other arts organizations will use the Rialto or the Theater on the Square, or — as the Tacoma City Ballet is doing – venues outside Tacoma.

Also new to the plans is an outdoor plaza on the grassy slope between the Pantages lobby and the street.

Graded at lobby level and including benches and a small stage, the area will be able to be covered, allowing for outdoor busking and performances. An electronic reader board on the street side will replace the light bulb marquee.

Acoustic amplification initially included in the plans has been dropped due to costs and because it would impinge on historic plasterwork in the Pantages.

About $2 million will go toward the fundraising campaign and other costs.

Finally, $2.3 million initially intended for an endowment fund has been allocated to 10 years of future programming by the Broadway Center, which is a separate producing entity as well as a contracted theater manager.

The programming will include in-house productions, education and community showcases, Fischer said, and free tickets or events. There also will be an annual leadership program in collaboration with the University of Washington Tacoma and the Washington State History Museum.

“The Pantages is a treasure, but I’m particularly interested in the programming fund,” said state Rep. Laurie Jinkins, D-Tacoma, one of the many elected officials headlining the campaign. “The arts in Tacoma are so important for the growth of the city … and the Broadway Center has done a lot to engage really diverse communities.

“I’m very supportive of keeping that going so that the arts are important for every person in our community, not just some.”

Fischer sees the campaign as a continuation of the Broadway Center’s history of bringing government and community together for the arts.

“It was the Broadway Center who started the first private-public partnership (for city development) in 1979, with the saving of the Pantages,” he said. “We’re proud of that.”

For Kendall, the value of the $24.5 million restoration lies in a place for Tacoma to gather.

“The theaters represent the heartbeat of the community, a place where we come to have our minds opened and share experiences,” she said. “This becomes a place for bringing the community together.”