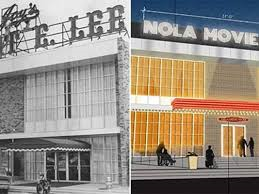 From WWLTV.com: The film projector at the old Robert E. Lee Theater went dark on Sept. 9, 1990, with a final showing of the Kiefer Sutherland and Julia Roberts movie “Flatliners.”

After that, the once-popular Lakeview theater fell into a state of neglect, despite at least one effort to reopen it, and met the wrecking ball in 2009.

The site has been a vacant lot since, but now a local developer hopes to build a four-screen theater there, bucking a trend in recent decades that saw large chain theaters in the suburbs replace neighborhood theaters.

Dubbed the Nola Movie House, the family-friendly theater would include four screens in smaller, more intimate auditoriums than those of multiplexes, and include food and drink service. A screen is also planned for the roof.

Documents filed with the city indicated there would be no more than 190 seats in the entire building.

Architects have applied for minor zoning variances, including one that would allow a marquee to be placed atop the front of the theater, similar to the Robert E. Lee name perched atop the former building. The exterior design of the new theater closely resembles the old theater, which opened in 1965.

A recent meeting between the architects and neighbors included questions about whether liquor would be served, if lighting from the marquee would disturb neighbors and if traffic would increase.

According to records of that meeting, representatives said alcohol would be served but only during movies and the theater would not operate as a bar; lighting would not bleed into the surrounding neighborhood; and they do not expect any impact from additional cars since a large parking lot exists at the shopping center where the theater would be built.

Ellen Johnson is a local movie buff who cherished the theater so much she bought the bold red letters from the rooftop marquee.

“This was definitely an iconic theater in our very storied city, and I hated to just see it go away,” she said, adding that the return of a theater to Lakeview would be a welcome addition. “It will be another place for families to go and movie buffs like me. I don’t have to drive across town.”

Benji Azar, the man behind plans for new theater, has memories of the old Robert E. Lee theater, which led him to plan a replacement.

“My wife and I grew up going to movies at the Robert E. Lee Theater, and we both have memories of our experiences there,” Azar said in an email.

He said the space will be designed for those who remember the old theater and those who are used to a more modern movie-going experience.

“What we’ve put together, at least I hope, is a space that reminds people of what was once there and at the same time, creates something fun and cool enough that people will want to come back to over and over again,” he said.

The Robert E. Lee was built by theater mogul Joy Houck and considered the “shining new star” in his chain, Jack Stewart, a local preservationist and historian, and Rene Brunet Jr., owner of The Prytania theater, wrote in their book “There’s One in Your Neighborhood: The Lost Movie Theaters of New Orleans.”

Errol Laborde, a historian and editor of New Orleans Magazine, remembered it as the first big theater in the lakefront area and its unique interior, done in a riverboat motif, and something else that was equally unique for its time.

“It also had a lot of interesting concessions as I recall,” Laborde said. “I think you could buy alcohol there which was sort of revolutionary for the time.”

After the theater closed, Brunet made an unsuccessful effort to lease it, and though it only took on a few inches of water during Hurricane Katrina, the owner, M&O Realty, considered the building dated and thought it would cost too much to retrofit, Stewart and Brunet wrote.

While the Nola Movie House would be a neighborhood theater, it would be a far cry from the neighborhood theaters of days gone by and a something of a rarity. Until recently, The Prytania in Uptown was the only theater left in the city, but it retains an older feel with one screen, a larger auditorium and traditional concessions.

The model of smaller auditoriums with plush seating and food and drink service first appeared on the local scene when the Theatres at Canal Place opened in 2010, bringing a movie theater to the French Quarter and Central Business District.

Since then, local theater operator George Solomon opened a similar “movie tavern” in Covington, and The Broad Theater opened in Mid-City at North Broad Street, near Orleans Avenue, opened earlier this year.

The Broad is another four-screen theater that shows independent films along with more mainstream films from major Hollywood studios.

“You know, that’s what New Orleans is all about, the old style theaters. We have Canal Place now redone, the Prytania Theater is still in action,” said Brendan Gonzalez, who lives in New Orleans. “I think it’s time for Lakeview to get an old-school boutique theater back up and running.” 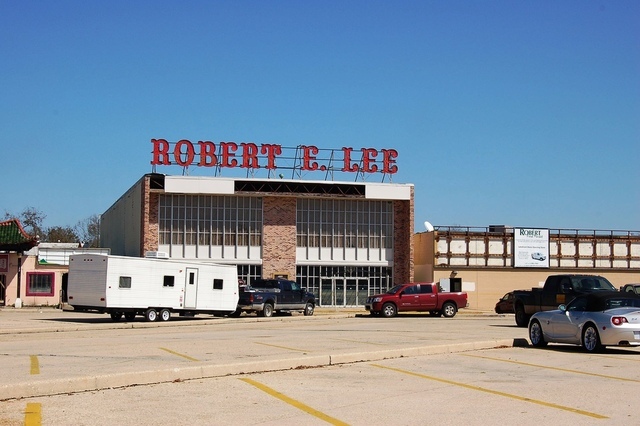 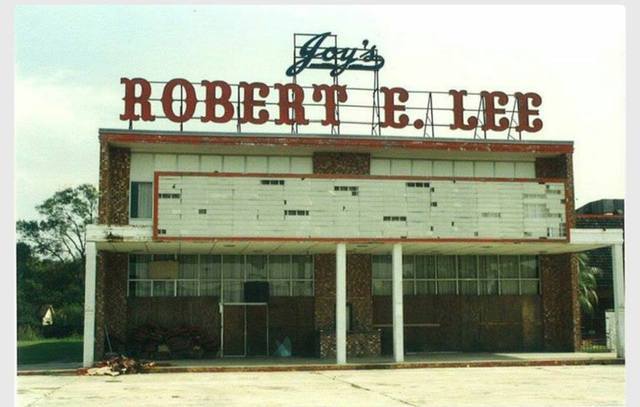