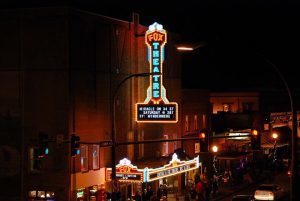 From Thurston Talk: There is something magical about the glow of a Marquee sign. It brings fond memories of soda fountains and the golden age of Hollywood. If you grew up in the area, you may remember when the historic Fox Theatre lit up South Tower Avenue in Centralia. Nestled in amidst the old shops, it was a hub of activity when it opened in 1930 as part of the Fox West Coast Theatre chain. At the time, it was a 1,200 seat art-deco theatre that ran as a movie theater until 1999. But then the films stopped. The marquee went out, darkening the entire street. It was a stark reminder against the skyline that the city had seen better days.

Almost a decade later, in 2008, Scott White moved back home to Centralia with one goal in mind: to do something about the darkened theater. He founded the non-profit Historic Fox Theatre Restorations and has been the President of the Board of Directors ever since. This is a 100-percent volunteer position for him.

“After spending 20 years working in the entertainment industry, I hoped to use some of the experience I gathered along the way to make the project a success,” Scott says. “Having grown up in Centralia, the Fox Theatre was a very important part of my childhood and was the beginning of a lifelong love of theater and movies.”

The group’s ultimate goal is a complete restoration of the building, inside and out, to its former 1930s glory. But, Scott, says, this doesn’t mean it won’t be able to handle today’s needs when it comes to technology.

“The Fox will receive a comprehensive technical upgrade to be a modern performing arts center and premiere community-gathering space for Southwest Washington,” he says.

When complete, it will be a major performing arts center serving the entire region with a Broadway series, big name music acts, film events, comedy shows, author events, community events and much more.

In 2012, the dream became more real as a stunning replica marquee sign was lit – a sign that life was coming back to the area. And, once more, Fox Theatre was going to be its hub.

“Theatre restoration projects have been the life blood of many cities big and small,” Scott says. “It is one of the first thing that cities who are trying to restore downtown historic cores do to jump start the local economy. The Fox Theatre is no exception. Since the marquee went up in 2012, we have seen an explosion of new businesses and foot traffic in downtown Centralia especially on the blocks adjacent to the Fox. Of course many projects have contributed to this increase in economic activity, but the Fox Theatre is certainly a main driving factor.”

The project has garnered attention from people all over, not just Centralia. “A large portion of our patrons and members come from Thurston County,” Scott says.

In fact, they have 60 members from Thurston County. A significant number of advertisers and sponsors from the area have also jumped aboard to show their support including Mixx 96 FM, Shanna Paxton Photography, Zonta Club of Olympia, Sinclair Law Office, Mystical Cupcakes, Hometown Property Management, Your Canine Resource, and Funeral Alternatives of Washington. Paige Porter, membership and sales coordinator, is from Olympia and Preston Porter of Kraken Design lends much needed design and technical support to the theatre.

Just 20 minutes from Olympia, historic downtown Centralia is the perfect day trip or weekend getaway with unique shopping, dining and lodging options. It gives those from big cities the chance to experience the charm and friendliness of a small town that still looks a lot like it did in the 1930s, especially now that the Fox Theatre is once more active.

Historic Fox Theatre Restorations has raised about $1.4 million of the $5-$7 million needed for the Comprehensive Restoration.

“We are so thankful to the local community for all of the support,” Scott says. “Thousands of individuals and businesses have given time, money, materials and more to the Fox Theatre restoration making it truly a community project.”

In 2015 and 2016, they finished restoring the bathrooms and had major progress on their Rotary Mezzanine restoration. This year, they have also completed replacement of the main roof, a repair of the south wall and a complete overhaul of the HV/AC system.

Public involvement is crucial to the rebirth of the Fox Theatre, which will remain a non-profit even after the renovations are complete. Scott says, “The profit is for the community and the businesses who will benefit from the economic activity produced by the Fox Theatre.”

Community members can show support by becoming annual theater members, which gives them discounts on fundraising events in addition to other perks depending on the chosen level. If you are looking for something more permanent, you can purchase your own theater seat. The seat will have your name and you will have first option to purchase tickets in your seat for official Fox Theatre events. 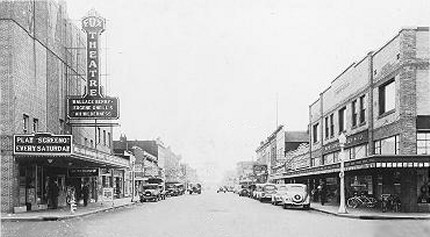 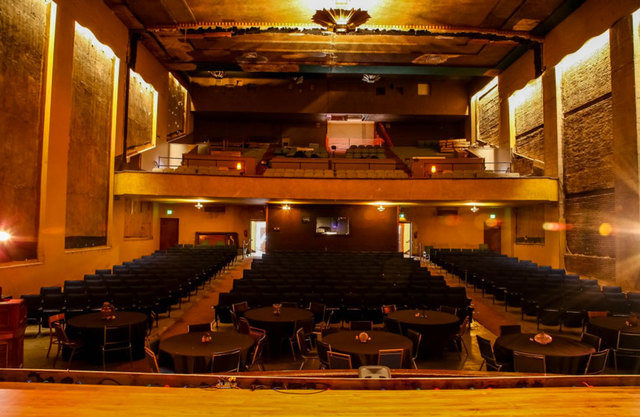