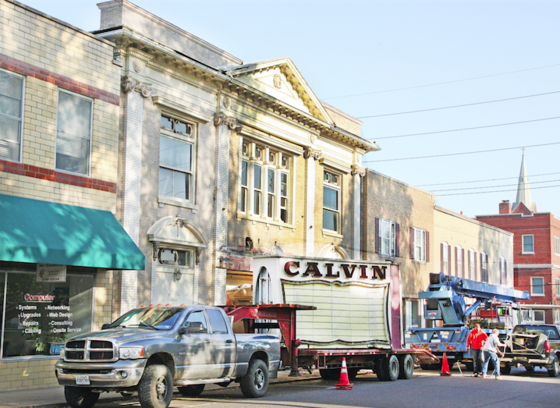 From emissourian.com:
The marquee at the Calvin Theater was removed this weekend by the owners of the building.

The city of Washington contacted the property owner’s, Douglas and Gregory Strothkamp, in early October about property maintenance code violations at the old theater on 311 Elm St.

In a letter to the Strothkamps, the city outlined numerous problems with the building.

The letter said the property was in violation of Sections 106 and 107 of the city’s property maintenance code and the owners have 30 days to address the problems. The letter is dated Oct. 4, 2016.

City Administrator Jim Briggs said the letter did not call for the marquee’s removal, but did address several issues with the sign.

Briggs said a resident complained about the condition of the marquee and pointed out potential safety hazards.

“We got a complaint that it was in horrible shape,” Briggs said. “He said he thought it could cause dangerous harm.”

An inspector for the city visited the Calvin Theater in late September to check on the condition of the building. City Engineer John Nilges then reviewed the inspection and issued a report.

The report said the marquee gap is larger at the top than at the bottom indicating it may be sagging toward the sidewalk.

“At no place did it say they had to remove it,” Briggs said.

The report needed to be filed by a Missouri Registered Structural Engineer and contain the current status of the building, written detailed report for any modifications and repairs and sealed detail drawings showing modifications or repairs.

According to the city’s letter, the Calvin building has issues from top to bottom.

The roof has a temporary tarp in place — the same tarp documented by the city in 2013. Despite the tarp, the roof is leaking.

Shingles were reported missing and the report said the building also has various openings that allow for potential animal and insect infestations.

Additionally some soffit is missing under the marquee and the exposed plywood is rotting from the moisture.

Metal soffit was spotted sagging and peeling away from the marquee.

To fix the issues, the city said the Strothkamps needed to ensure the safety of the public and that the sidewalk underneath the marquee is safe by filing an engineering report.

The walls of the building are in need of tuck work, according to the report. City code states all walls need to be free from holes, breaks and loose or rotting materials. The city said there were too many damaged areas to show in photos.

If the issues aren’t addressed in 30 days, the city can place a lien on the property or close the property. Section 108.2 of the city code says vacant structures unfit for habitation and occupancy that aren’t in danger of collapse can be closed by the city.

The code says the city is allowed to post a placard of condemnation onto the premises and order the structure closed up so it is not a public nuisance. If the owner fails to close the property in a specific time frame, the city can close the building and place a lien on the property.

“There’s always that option for the city,” Briggs said. “We’d rather see something done to stabilize the building and have someone find a suitable use for the building.”

The Calvin Opera House Theater was built in 1909 by John L. Calvin on a vacant lot adjoining the Universal Grocery on Elm Street.

The Calvin was planned for theatrical productions, but shortly after it opened a movie screen and projector were installed for supplemental income.

The theater was operated by the Calvin family until the early 1930s, when they leased it to Commonwealth Theaters, Inc., a national chain.

Commonwealth purchased the Calvin in the mid ’70s and then it sold the business in 1983 to Mr. and Mrs. George McLean of Gerald. The McLeans, who at the time owned several theaters in the area, ran the Calvin for a couple of years before they sold it to Larry and Nancy Synder.

The Calvin was sold once more after that before Doug and Pam Strothkamp purchased it in December 1999. 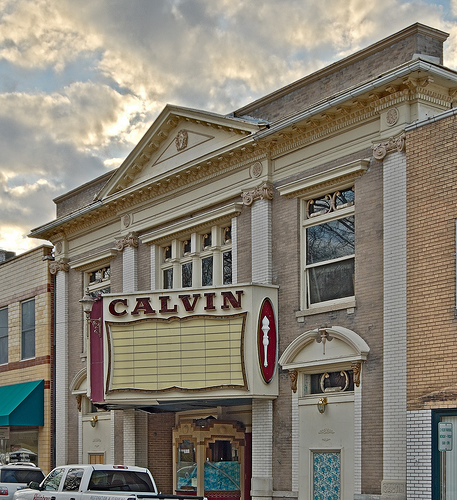