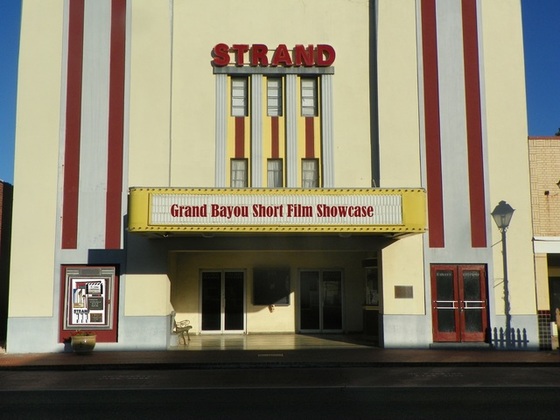 From The American Press: A restored marquee and a new paint job will soon greet visitors to the historic Strand Theater in downtown Jennings. Work has begun on a $75,000 face-lift project, which is expected to continue through the spring.

“The Strand Theater is our pride and joy on Main Street, and it just needed a face-lift,” said City Project Coordinator Dusty Chaisson.

“We want the public to be proud and see Main Street Jennings for what it was back in the day,” Chaisson said. “We are very proud to try to restore the pride and take care of a historical structure that offers service to the community that so many other cities do not have.”

Not many old historical buildings like the Strand Theater are still being used today, he said. The building is listed on the National Register of Historic Places.

The old marquee has been removed and is being restored, cracks in the facade are being repaired and windows are being replaced. Crews are also working to repaint the exterior in the theater’s original colors, which were hidden under layers of paint.

“It is going to be a painted lady, like it originally was,” Fake said. The retro colors will include hues of violet, red and yellow.

The theater last underwent renovations just prior to the 1993 Hollywood-style premiere of John Sayles’ “Passion Fish,” which was filmed in the Jennings and Lake Arthur area.

I love significantly your own post! I look at all post is great. I discovered your personal content using bing search. Discover my webpage is a great one as you.I work to create several content this post. Once more you can thank you and keep it create! Enjoy!best egg beater for cake

I truly value this superb post that you have accommodated us. I guarantee this would be helpful for a large portion of the general population.zcode discount

Your work here on this blog has been top notch from day 1. You’ve been continously providing amazing articles for us all to read and I just hope that you keep it going on in the future as well. Cheers!life