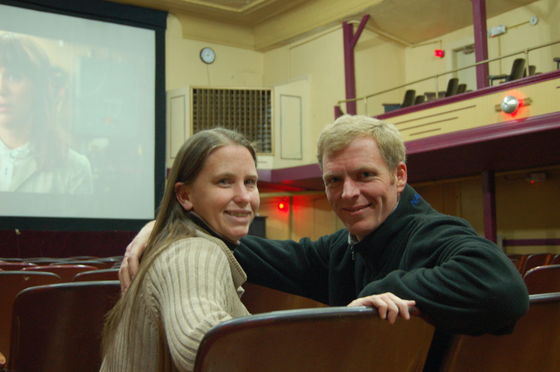 From qconline.com: At the holidays, it’s a pleasure to see a family-friendly Christmas movie in a single-screen theater, with concessions, and not have to take a second mortgage to do so.

Since this month started, that’s been possible here in the seat of Mercer County, as Aledo native Dan Mellgren and his wife, Michelle, reopened the historic Aledo Opera House. The 1904 building — with 414 seats — had been closed for two years.

“This town needs some entertainment,” Dan said recently. “We didn’t have to do anything. The building’s here, the screen’s here. Everything was here.”

“We’re gonna gear it toward the junior-high age group,” he said. “Parents are looking for a place to drop their kids for a couple hours. That’s what it was when I was a kid — here’s 10 bucks and we’ll see ya in a couple hours.”

Dan said it last closed because of the costs for licensing each movie. The Mellgrens lease the theater — and since Aug. 1, The Slammer Bed & Breakfast — from Dick and Jennie Maynard, and run the businesses.

“This building has been a million different things,” Dan said of Aledo Opera House, including a roller rink and a basketball court. “Nothing’s really changed in here,” he said, noting the main difference since he was a kid was that three rows were removed to make more leg room between rows.

An October 2000 fire in a neighboring building damaged the theater, and a renovated opera house reopened in 2002. It closed once before during the past decade.

“It’s a historic building in our downtown area, been part of our community for 100 years. It’s really an asset,” said Tarah Sipes, Aledo’s economic development coordinator. “It’s an amenity for our residents; there’s a big nostalgia factor as well. I also spent time there in my youth. The movie theater was a great place to go.”

She’s working with the city administrator and Main Street director about securing private funding to get digital projection needed for new films.

“I’m excited; the Mellgrens do have quite a bit of energy and passion for what they’re doing, which makes a big difference,” Ms. Sipes said. “If we can harness their energy, make more it visible, I hope that we can get things rolling in the same direction.”

Dan met Michelle when they attended Southern Illinois University. While they didn’t graduate, Dan worked in management with AirTran airlines for 10 years. They’ve been married since 2000. They have two children — 14-year-old Emma, and 11-year-old Colin.

The Mellgrens lived in the Miami, Fla., area for eight years; he left AirTran in 2010, and started working as vice president for a company that sold merchandise to duty-free stores.

“I left that because I was gone nine months out of the year,” Dan said, noting he traveled all over the Caribbean.

When they moved back to Aledo about two years ago, he started a “pay it forward” gift business.

“This is the best way to slow it down — move to a small town, tie yourself to some big anchors,” Dan said of the historic landmarks they manage. “The nice part of it is, the kids can be part of it,” Michelle said, noting their kids help out.

“I want my kids to have a little bit of what I had growing up,” Dan said. “This was an easy fix. With the Slammer, I usually do the morning stuff, so it leaves the afternoon for this. It’s a win-win, and my son helps me clean. He actually takes the money for tickets and enjoys it. The reason we’re back here is family. … My son, daughter, wife and I can all be here together.”

“It’s definitely good for both of them,” Michelle — whose family is in Chicago — said of their kids. “Emma’s friends come and help. They take pride in it.”

The nine-room Slammer is in the 1909 former Mercer County Jail. It was listed on the National Register of Historical Places in 1997 and was converted into a bed and breakfast in 1998 (originally The Slammer was the restaurant and B & B called The Great Escape).

Michelle is studying at Black Hawk College, with plans to become an elementary-school teacher, and is the current PTO president in Aledo.

The first weekend of December, and their first running the theater, was hectic — in addition to showings of “It’s a Wonderful Life” in 35-millimeter, they hosted It’s a Mystery dinner theater and the Untangled women’s conference at The Slammer (both Saturday).

The dinner theater (a special, and not regular, event) was catered by La Belle Vie, a local restaurant. “Little did we know we’d be running a movie theater at that time,” Michelle said.

“It was a little crazy, but everything worked out,” she said, noting she didn’t expect to have the theater up so soon. “I had agreed to it. I just didn’t know he was doing all the work. It was in the middle of (Black Hawk) finals.”

However, the 35-mm projector didn’t work well, so Dan got a projector to play DVDs (now attached to the 20-foot-high ceiling), which is the fix before they raise money ($25,000 to $50,000) for a digital projection system.

Geneseo’s 1924 Central Theater is owned and operated by the Geneseo Park District, and made the digital conversion in 2012. It shows first-run films.

“What we’re trying to do is give people an experience,” Dan said. Tickets for the 7 p.m. showings are $5, and popcorn is just $1.50, among other concessions. They have a new sound system loaned by True Audio in Aledo, for as long as they need.

“To have everything line up like that, who gets that blessed?” Michelle said. “I’ve had so many people reach out and say, ‘If you need help, I’m here.’ It just seems unreal.”

“It looks sexy to get into, but once you get into the bills, it’s not,” Dan said, noting there are licensing fees for each film. “Keeping old buildings open, letting people experience this is half of why we’re doing it. It’s a cool old theater.”

“There’s just so much history here,” Michelle said of their two businesses. “I think Aledo takes pride in their history, where they come from. To be part of it, someone’s gotta lead it. Somehow we’re crazy enough.”

At The Slammer (theslammer.net), “I would definitely love to do more community things, just some things to open up the doors, for groups to meet there,” she said.

People have asked the couple if the theater is just a seasonal thing. “We genuinely will be year-round. This is forever,” Michelle said. They plan to show films every weekend, at 7 p.m. each night — including Christmas and New Year’s Day, she said. 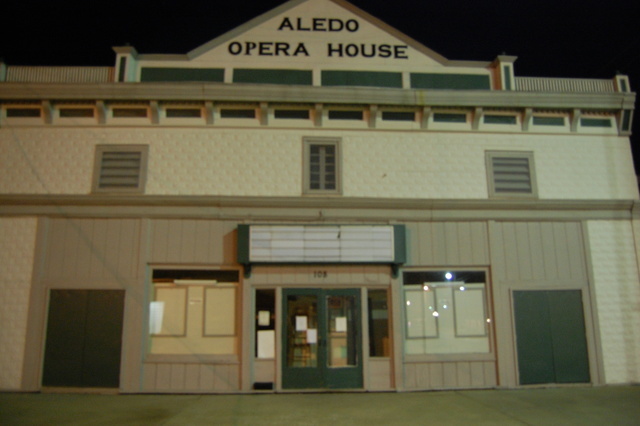 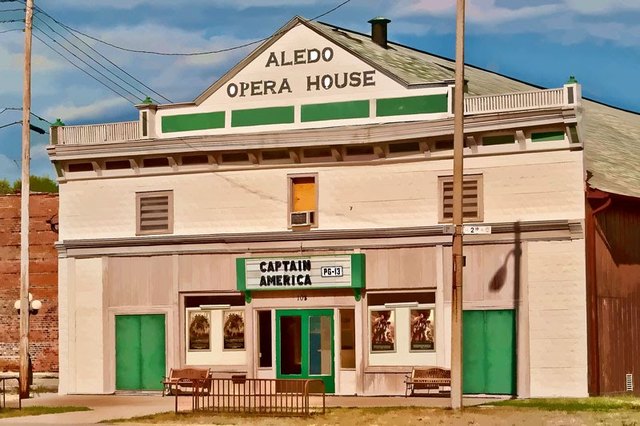