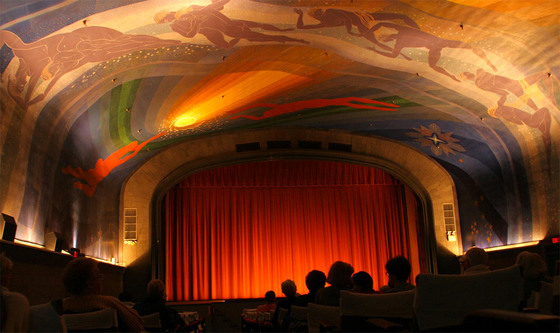 From the Cape Cod Times: The historic Cape Cinema is planning some restorations, and the job will start with what most affects audience comfort: the seats.

Cinema managers and the Cape Cod Center for the Arts Inc., which owns the building, recently launched a campaign to raise more than $165,000 to restore the 277 original art deco chairs that were built back in 1930 specifically for the movie theater space – and specifically to match its massive, celestially themed ceiling mural.

While a small portion of the chairs have been previously patched, covered, reupholstered or replaced, this will be the first time in the intervening 86 years that the seats have been rebuilt to the original vision.

Synthomas Upholstery in Hyannis is due to take each chair apart and, by hand, rebuild and reupholster it in tangerine suede to match the original plan, according to Eric Hart, who operates the theater. While the covers will be fire-proof and stain- and rub-resistant, there will also be padding and support added. Contemporary patrons will likely welcome those additions, Hart notes, especially for the multi-hour simulcasts of live opera, theater and ballet the cinema has offered in recent years.

About half of the money (so close to $80,000) needs to be raised by the end of the year for the project to go forward, says general manager Hugh Hart. Once repairs begin, 15 chairs are scheduled to be restored by hand per week, with the project taking more than five months while the cinema remains open.

The moviehouse will likely shut down for a couple of weeks in spring, Eric Hart says, to finish up the work and make other changes (including new carpeting, sealing the floors and rebuilding the lobby concession stand in an art deco style) before the 2017 summer season begins.

Although all donations are welcome, the campaign urges patrons to donate $600 for the cost of restoring one chair (which includes the floor work). Those who do will have their name engraved on a plaque on the chair, get free admission to movies there for a year and, according to a fundraising letter from Hart and center president Leslie A. Gardner, “become a part of the ongoing legacy of this historic building.”

Pretty much every part of the cinema has an art-related history – including those chairs. Raymond Moore, founder of the 90-year-old Cape Playhouse next door, opened the summer movie theater in 1930, with New York architect Alfred Easton Poor designing the facade using Centerville’s Congregational Church as a model.

The auditorium was created in art deco style and the arm chairs designed by Vienna-born Paul T. Frankl – considered one of the most influential artists of the American art deco period, according to cinema lore – through his New York City gallery. The chairs were produced by the Johnson Furniture Company with black lacquer frames and tangerine suede, meant to complement the cinema’s 6,400-square-foot ceiling mural of the heavens designed by American painter, printer and illustrator Rockwell Kent.

The chairs, according to Eric Hart, were individually cut for a specific space in the theater, with legs different sizes because of the sloped seating. The three dozen or so chairs in the balcony were replaced sometime in the 1970s – before Hart was involved – with flip-down movie-theater chairs and those are not part of the current restoration plan. But the extra originals from that balcony replacement have, over the years, been used to fill in for broken chairs downstairs. Chair legs have had to be trimmed, though, so the replacement chairs would fit specific spaces, Hart notes.

Regular patrons know the current chairs have white seat-covers, which Hugh Hart believes may have been originally used to protect the seats when the summer-only theater was shuttered. More recently, the covers have obscured rips and wear as the year-round use of the theater over the past decade has accelerated deterioration. Some of the chairs were also damaged decades ago, Eric Hart says, when the sprinkler system was tripped during the winter and poured 2 feet of water into the theater.

Restoring the seats has been under discussion for a decade and multiple companies were consulted and explored. Acknowledging such a large fundraiser is “a risk,” Eric Hart says he hopes the major community effort needed to restore the seats will also be the start of a wider push to raise money to restore the Rockwell Kent mural, too.

There could be “a whole movement to restore the theater rather than just maintain it,” he says. “We could make it as beautiful as it was when it opened in 1930.”

But, the Harts hope, with the comfort level desired by 21st-century patrons. 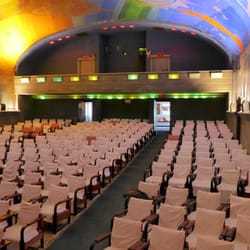 Regular visits listed here are the easiest method to appreciate your energy, which is why why I am going to the website everyday, searching for new, interesting info. Many, thank youmerchant services jobs

I needed to thank you for this phenomenal read!! I unquestionably adored each and every piece of it. I have you bookmarked your site to look at the new stuff you post.credit card processing lead