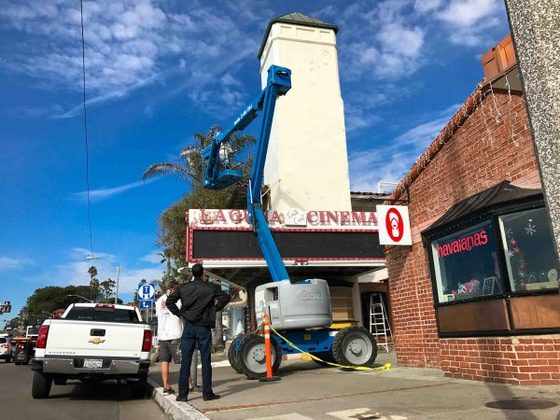 From the Laguna Beach Indy: Signs of life are visible within Laguna Beach’s only movie theater, a landmark building that closed 16 months ago and is expected to reopen shortly. There is new carpet in the lobby and a giant popcorn maker gleaming just inside the front doors. Painters are dodging ladders and caution tape, working to meet the slated opening date.

With only a one-year lease, Vintage is making modest cosmetic improvements to the exterior and interior, including small sections of improved seating in each auditorium, in an effort to get the doors open by Christmas, said spokesperson Lance Alspaugh. A state-of-the-art Sony digital projector has been installed and the snack bar will offer Coke and Orville Redenbacher popcorn along with the standard fare such as Milk Duds, Red Vines and Gummi Bears, he said.

Vintage Cinemas, Inc. of San Diego owns and runs three other historic properties: The Vista Theatre, with one screen in Hollywood; the Los Feliz 3 Cinemas, in Los Angeles; and the Village Theatres, with three screens on Coronado Island in San Diego.

The Vintage brand invites guests “to take a break from the megaplex” and experience “timeless movie-going” in restored venues.

Calling the Laguna venue a “work in progress,” Alspaugh envisions taking “the time necessary” for a master plan to restore the theater, including the removal of the wall which now divides the auditorium in half, and restoring the Edgar Payne murals commissioned by the theater’s founders Aufdenkamp family and hidden from view since the theater became a double screen facility in 1976.

South Coast Cinema closed on Aug. 30, 2015, due to a lease dispute between Blumberg and the previous operator, Regency Theaters. Lyndon Golin, president of Regency Theatres, had planned to spend $200,000 to install the minimum upgrade of new seats and digital projection plus new carpet, drapes and paint to the historic building. He said, “we would need a minimum five-year lease,” in order to realize an adequate return on the capital improvements during a September 2015 interview with the Indy. “The landlord wasn’t interested.”

Six months later, another theater operator expressed interest in the property, but a lease was never finalized. At the time, Blumberg was seeking a luxury theater company to buy the historic 1922 movie house, Leonard said in an interview.

Blumberg envisioned the new tenant remodeling the property with high-end amenities, including dinner and beverage service, he added. The listing price was $14.2 million, according to Brad Wiseman, from Pinnacle Estate Properties in Calabasas. The property, described as a 794-seat theater and two retail stores, is now “off the market,” according to LoopNet, a real estate website.

Vintage has a proven track record for restoring and running historic movie houses. “Our designer Ronald Wright, who restored the Vista Theater in 2000 and worked with late designer Joseph Musil on our Village Theatres in Coronado, will be displaying design concepts in the lobby illustrating how the restored Laguna theater might appear some time in the future,” he said. Musil also designed the El Capitan Theatre in Hollywood.

Alspaugh says he’s taking a leap of faith with a one-year lease and describes the South Coast Cinema as “a little jewel waiting for a much bigger plan.” Hoping to work with the city and attract investors going forward, an ultimate vision for the venue would involve converting the screen count to three by creating a 200 seat main auditorium and adding two additional VIP-style screening rooms seating 50 each directly behind the lobby wall.

Another independent movie house, the Port Theater in Corona del Mar, was renovated in a similar style with fewer seats, but with more flexibility for use as an event space. Shuttered for 14 years, the theater reopened in 2012 under new ownership by Newport Beach resident and philanthropist Fariborz Maseeh.

The Balboa Theatre, also in Newport Beach, too has struggled to compete with megaplexes, but will meet a different fate. Originally built in 1927, it had a life as a vaudeville venue, an art film showcase and an X-rated movie house, The Pussycat Theater. This spring the Newport Beach City Council elected to sell the venue when the Balboa Performing Arts Foundation failed to obtain funding to reconfigure the building into the proposed Balboa Village Fine Arts Center.

More than 59 percent of the nation’s 40,759 screens are operated by the top 10 major circuits, such as Cinemark and Regal Entertainment, according to data compiled by the National Association of Theater Owners, based in Washington, D.C.

Heidi Miller, who owns the Tight Assets clothing store on the same block as South Coast Cinema opposite Main Beach, says her business dropped off when the theater and the neighboring shake shop closed in 2015. Since then, the retail spaces on either side of the theater have been re-occupied by a Havaiana flip-flop store and a macaroon shop.

Miller is hopeful about the theater renovations despite short term leases. “Both new stores have great decorative windows and encourage walk by traffic. That helps us all,” she added. 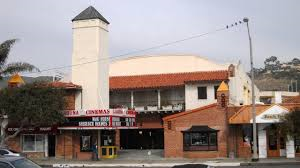 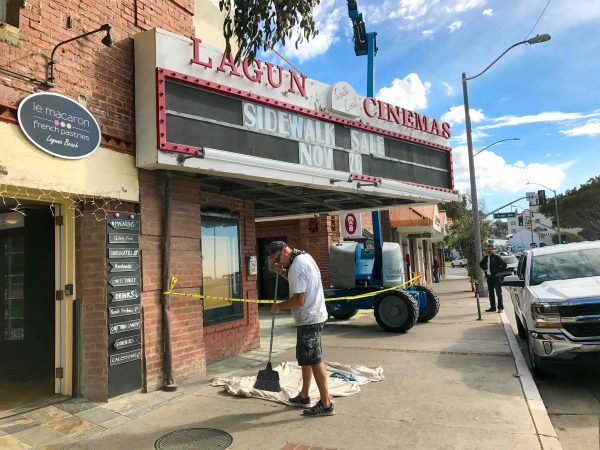