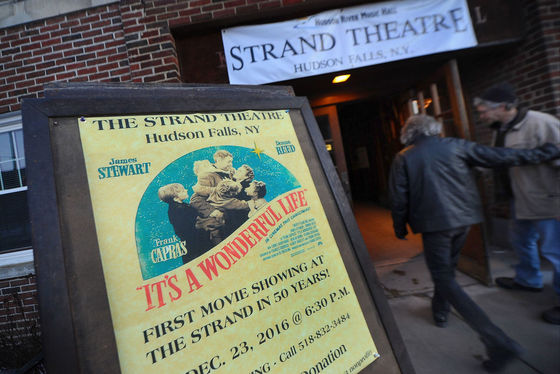 From The Post-Star: In 1938, Cornell Hall won a brand-new Plymouth at the Strand Theatre on Main Street. And on Friday night, his grandson, John Hall Jr., was back at the historic venue for a holiday event that breathed life into the long-dormant movie house.

“In the 1990s I did the plumbing and heating,” said Hall, referring to work he completed for the town when the theater housed town offices and the town courtroom. “My father, Jack Hall, was always here as a kid.”

Along with Hall, about 40 people came to a holiday screening of Frank Capra’s classic, “It’s a Wonderful Life,” on Friday night.

“Tonight is its very first presentation in over 50 years,” said Jonathan Newell, executive director of the Hudson River Music Hall and the committee to renovate the Strand.

Unsure of the exact date the last film was shown in the theater, Newell said they found a copy of a 1961 Post-Star article that was talking about demolishing the movie house.

Debbie Pollack of Hartford made a point of coming to see the film. “I wanted to come because it’s the first movie shown here in over 50 years,” she said earlier in the day. “And I watch the film every year, it never fails. It’s a fantastic film.”

The film, starring Jimmy Stewart and Donna Reed, premiered on Dec. 20, 70 years ago. The famed holiday classic was released at a time the Strand Theatre was in business, although it’s not known if the film was actually shown in the theater.

First opened in the 1920s, it was initially a vaudeville house and later started showing films.

On Friday night, those arriving early for the event got to see the original animated film “How the Grinch Stole Christmas” while popcorn popped in a traditional kettle. And just after 6:30 p.m., Newell, who was wearing an original Strand Theatre usher’s cap, welcomed moviegoers.

The Strand Theatre, purchased by the Hudson River Music Hall from the town of Kingsbury in October, received a $100,000 pledge from the Sandy Hill Foundation. And according to Newell, there has been a huge volunteer effort to restore it to its former glory.

“We have retired contractors who come here every day like they are coming to work,” Newell said.

Volunteer Mary Ellen Barlow tells the story of the day they discovered the original lobby ceiling.

“The day we closed, Jonathan climbed up a ladder and pulled back a tile and the first thing he saw was that first section,” said Barlow, pointing to the richly ornate plaster flowers and swirling patterns of the historic structure.

“I love the building and what it stands for,” said Michelle Bennett, who came to see “It’s a Wonderful Life” with Hall.

But just hours before Friday’s showing, volunteers and the renovation committee wondered if they would actually be able to show the film in the lobby section of the theater. “We got our CO (certificate of occupancy) at 3 p.m. today,” Newell said, adding that they scrambled to get the temporary theater set for the night’s unveiling.

Starting in January, Newell said they plan on offering a senior film series and an art film series.

“Two Wednesdays a month we will be showing a film for seniors and they can come in and see it on the big screen,” he said.

Additionally, there are plans for an open mic night, concerts and more films while they continue construction on other parts of the building, Newell said.

Behind the lobby, where Friday night’s film was shown, are the performance stage and previous seating, now under a concrete cap. Newell said originally the seats were settled in sand and once they remove the concrete cap, they will do something with the sand, perhaps a beach party.

“Maybe we will sell buckets of sand from the Strand,” he said. 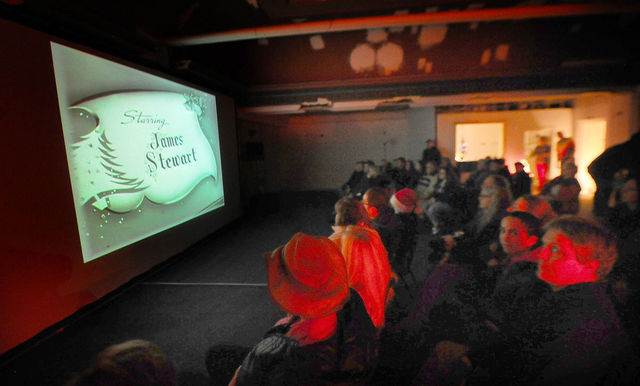 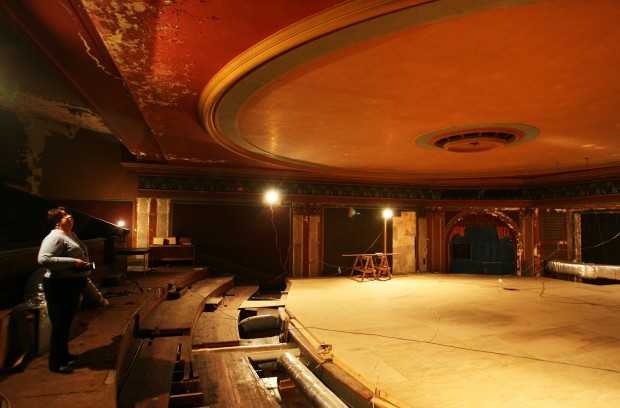 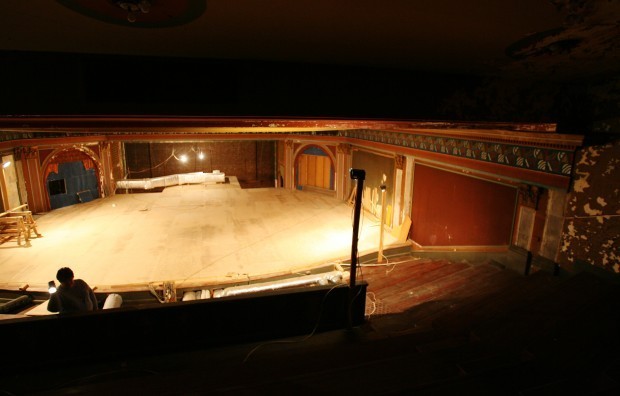 these historic places are fun to see. glad you got some inside pictures. fencing sacramento

thanks for writing this! spokane fence

Love reading the side of the theater. I never this has been too old in now a days. Hope to see at least one live event here. concrete little rock ar