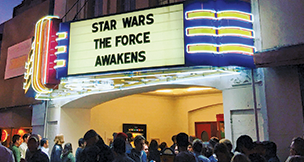 From Film Journal International: For the Texas Theatre, the m.o. is simple: “Innovating and keeping up, as well as preserving the heritage of the space and its legacy.” The innovating part, as related by Texas Theatre operator Barak Epstein, comes down to the same basics that most theatres are concerned with: continually providing a high-quality experience for their audience in terms of tech, amenities and top-notch concessions offerings.

The “heritage” aspect…well, that’s where this single-screen theatre nestled in Dallas’ Oak Cliff neighborhood is unique. Originally opened in 1931, the theatre rocketed to national prominence on Nov. 22, 1963, when police officers converged on the theatre to arrest a man suspected of murdering a local police officer. The man’s name: Lee Harvey Oswald, later to be arraigned for that day’s assassination of President John F. Kennedy.

Epstein calls the theatre “an infamous place, for better or worse” due to its role in that historic tragedy. That infamy isn’t what drew Epstein and independent film production/distribution outfit Aviation Cinemas, which he founded, to the theatre; he was “more interested in the fact that it was an almost-functioning space that just needed some work, to finish it out.”

But the theatre’s somewhat macabre history is impossible to escape, even if one wants to. “People come to Dallas, the first thing they want to do is go to the grassy knoll, right? So often the third or the fourth place they want to go is the Texas Theatre. We get people every day”—individuals and tour groups alike—“who just want to come in and see where Lee Harvey Oswald might have sat.” (Incidentally, Oswald sat in two seats, and they’ve both long been replaced, but a Texas Theatre employee will be happy to explain where in relation to the theatre’s current layout they used to be.) Those tours are more than welcome; though Epstein half-jokingly admits that it would be great if everyone who came in bought a movie ticket or a drink at the bar, he’s “not going to charge if you pop your head in and look around. As long as the doors are open and we’re open for business, people are welcome to come in.”

Sightseers and moviegoers alike will enter through a façade that’s a replica of what the theatre looked like when Oswald was caught there in 1963—though not the same one. You can thank Oliver Stone. In 1965, in an effort to shy away from the spotlight that resulted from the JFK assassination, then-owner United Artists gave the Texas Theatre’s exterior a complete overhaul. A subsequent exterior renovation followed, and then, in 1989, the theatre closed. In swooped Stone, who restored the exterior to what it looked like in 1963 so he could shoot parts of JFK there.

“Another box office from another theatre that was getting torn down was moved to the Texas Theatre so they could recreate what the box office mostly looked like in ’63,” explains Epstein. “That box office is still there, the one they moved in for the movie. The marquee had to be worked on again years later, but essentially we were able to keep it up to be what the ’63 marquee looked like.”

Moving on, we come to the ’90s, which weren’t kind to the Texas Theatre. It passed back and forth between multiple owners and remained vacant for years, at one point almost burning down. In 2001, the property was purchased by the Oak Cliff Foundation, which did a lot of structural work in anticipation of one day having a tenant. In 2010, that tenant became Aviation Cinemas.

But Aviation Cinemas had some renovations of its own to do. Thanks to the work done by Oak Cliff, the theatre’s infrastructure was sound, but “the lobby had been gutted several years ago, so it was kind of an empty space,” Epstein recalls. Renovations included a new lobby area, a concession stand and a full bar, the latter of which serves craft cocktails and craft beer, as well as themed cocktails tied to specific films or directors. There’s also a record player, with guests encouraged to BYOV (Bring Your Own Vinyl.) In terms of food, typical concessions fare is on offer, as are pizzas from Campisi’s, a Dallas staple since 1946.

But the main draw, as with any theatre, is the movies—and guests at the Texas get to see them in a gorgeous, 645-seat theatre that doubles as an event space for concerts, podcast recordings, spoken-word events and comedy acts. “We can do changeover in 35mm, which we installed in 2011. And we got DCP in 2014—we have a 4K Christie 4220. And then this year we upgraded the auditorium for surround sound, so now we run a 5.1 Dolby system,” Epstein explains.

High-quality tech dovetails with the legacy of one of the Texas Theatre’s early owners, eccentric entrepreneur Howard Hughes. The connection was a brief one: Hughes and his business partner Harold B. Franklin purchased the Robb & Rowley Theatres chain, which the Texas Theatre was a part of, right around the time the venue opened. “The story goes that he sold it right back right after the Depression,” Epstein says. “But it was actually [Hughes’] capital and his cash flow that potentially carried Robb & Rowley through the Depression, while a lot of theatres were not able to stay in during those rough years. So even though he was only around for a little while, his company probably really helped keep the building going.”

With only one screen, programming at the Texas Theatre can be tricky—it’s not like you can offset potential risks by always having one or two “sure thing” options on deck at any given time. That said, over the six years the Texas Theatre has been in operation, its management team has gotten to know its audience—and its audience has gotten to know them.

“We’ve had to cultivate a crowd. A lot of it is trial and error,” Epstein notes. For example, “in the beginning, not everybody was coming to a lot of repertory. And I think that DCP, industry-wide, has increased the viability of repertory programming. Everybody is doing repertory now, which is fine, because it’s telling us that people want to see these movies in a theatre. Even the mainstream theatres will do it—but I don’t think that hurts us at all. It actually calls attention to some of the more difficult stuff we can do.”

Specifically, the Texas Theatre has a soft spot for directors’ series—a Sidney Lumet series runs through November, and past series have been devoted to figures as diverse as David Cronenberg and Mike Judge. Epstein highlights a recent Jean-Luc Godard series as something that did unexpectedly well; he expected returns to be “modest,” but the screenings were “all very well-attended!”

Emboldened by the success of the Godard series, the Texas Theatre took a stab at German filmmaker Rainer Werner Fassbinder, but that one didn’tquite pay off. “Dallas might be ready for Godard, but not necessary Fassbinder,” Epstein chuckles. “That’s where we have to rein it back in a notch.”

Still, even when audiences don’t respond to certain programming decisions, the Texas Theatre is a nimble enough operation that it’s not locked into any one thing. Taken as a whole, the Texas Theatre’s lineup is surprisingly diverse, spanning from directors’ series to new independent films to special-interest docs to an occasional mainstream movie.

For example, last year the Texas Theatre took a break from smaller releases to screen Star Wars: The Force Awakens. The decision wasn’t just motivated by money—“we have a large space and good projection and sound, so we want to give people the experience of seeing a new, big film that everybody wants to see in a classic theatre,” says Epstein. He has fond memories of the NorthPark 1 & 2, a two-screen Dallas institution that closed its doors in the 1990s. “It was a massive experience—people made it a thing to go see movies there. They opened a really big repertory program that I was a massive fan of when I was in high school. Part of me has always been in awe of that, of a space where you would go seeJurassic Park, and you could also go there at midnight to see 2001.”

It’s the Texas Theatre’s eclectic mix of programming that is helping to bring moviegoers back to the Oak Cliff neighborhood, which Epstein describes as a “transitional part of town” that “was an older, hip neighborhood that went away and then came back.” Over the last few years, Oak Cliff has seen some measure of revitalization, which Epstein hopes is at least in part due to the draw of its newest/oldest cinema: “We like to think we helped get more businesses interested in being close to us.”

As for the future of the Texas Theatre, an overhaul of the currently unused balcony is in the cards. And the addition of another theatre to the Aviation Cinemas roster at some point in the future is certainly a possibility, as well. “We’re definitely open to opportunities,” Epstein confirms. “The opportunities we think would make sense are other buildings like ours, where we could create a new model for movies, live events and a bar in other underutilized and unutilized historic buildings.” 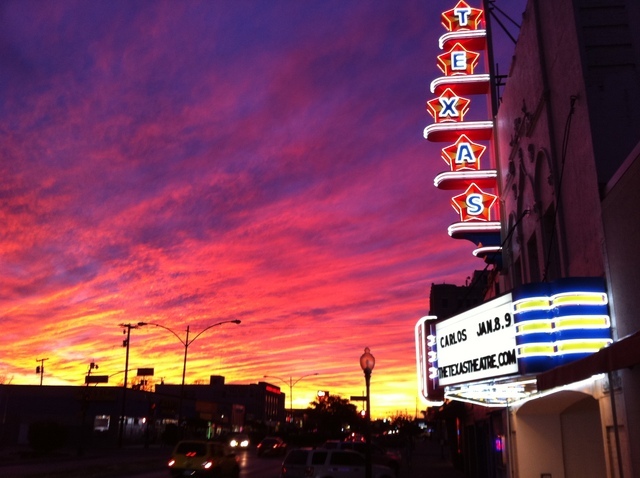