LaFayette, GA - Historic Mars Theatre to Reopen on May 13 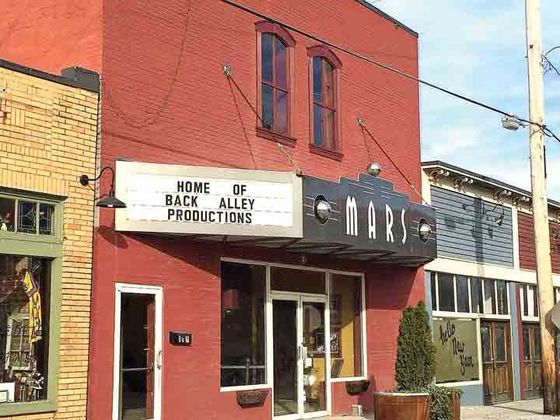 From Northwest Georgia News: It’s been a long time coming, but local theatre company Back Alley Productions (BAP) finally has a place to call home as it’s set to re-open the historic Mars Theatre in LaFayette Friday, May 13, with the classic play “Death of a Salesman.”

It’s been about five months since the papers were signed and the BAP company began the task of revitalizing the historic theatre on N. Chattanooga Street, with the hopes of transforming the gem of a space into a new, thriving entertainment venue.

“The theatre will be fully ready this week right before we open, so that’s part of the excitement,” said Kaylee Smith, BAP’s executive director. “Not only is the building getting ready, but so is the cast, the sets and everything will come together when we finally open on Friday. It’ll not only be an opening for the show, but also an opening for the style of theatre we’ll be bringing here.”

Arthur Miller’s American classic tells the poignant story of Willy Loman, a traveling salesman trying to secure the elusive American Dream. But as Willy grows older and times get tougher, he is forced to face the reality that he may have lost himself while seeking prosperity for his family.

Deemed one of the greatest plays of the 20th century, Death of a Salesman explores American concepts of competition, failure and the struggle between career and family that still resonate today.

“Now more than ever we are told our self-worth is based in the success of our careers,” Smith said. “This story explores the consequences of putting our whole identities into our profession, as well as the sacrifices, both moral and spiritual, we must make to meet society’s definition of success. Though set in the 1940s, Death of a Salesman cautions the modern man and woman about the dangers of losing yourself to the wrong dreams.”

Smith said she and co-director, Kelsea Rambin-Smith, are really excited about this show being the one to open the Mars.

“I had always wanted to do this play since the first time I read it. I’ve always enjoyed it,” Smith said. “We’re opening with this great drama, and then we’re following it up with a comedy they’re rehearsing upstairs, so it really covers both ends of the spectrum and pushes our ‘theatre for everyone mentality.’”

The company will be offering a full month of continuous theatre, as “Death of a Salesman” will run for two weekends, immediately followed by “The Importance of Being Earnest in the Face of the Zombie Apocalypse” for two subsequent weekends.

As far as the opener on Friday, Smith says the show and the venue have a lot in common.

“Our main character, a man in the 1940s, was much like this building was at that time,” Smith said. “The man (Willy Loman) was facing the same type of fate as this building at the time, the building started running down. You get old, you get forgotten, what do you do next?”

After traveling around to different venues during the first four years of the company’s life, Smith said she’s excited and grateful that BAP found the Mars when it did.

“It’s surreal here,” Smith said. “In some aspects, it’s kind of like starting over from the beginning, like when we originally started in 2012 getting the company off the ground. This time though, it’s not just the company, it’s the whole facility. We’ve had to learn about new equipment we’re bringing in, we’ve had to get in touch with the city and getting to know the community, so there have been some learning curves. It’s just been incredibly exciting because we didn’t know this could happen. It was a surprise to find the building, and now it’s become our home.”

Smith says the move, the revitalization of the building, and the promises of quality theatre to the community have all been a collective effort from everyone involved with the company.

“Every single person here has contributed in repairs, pulled up carpet, painting, so everything we’ve done and every little thing that we do, is about us as a theatre company,” she said.”

Opening nights are special in the theatre world, and Smith says she looks forward to giving audiences a great memory when they visit the Mars.

“If you’re new to theatre, or you’ve been a participating patron the entire time….when you come into this space, it’s going to be intimate, you’re going to be a part of the show, and you’ll be a part of the moment when all this takes place. That’s what’s going to be so enticing about this building,” Smith said. “You’ll be walking into a piece of history of this town. When you walk into the building there are stories here already from years past, and we want to highlight that in our structure, in our lobby. You’ll be entertained before the show even starts.”

“Death of a Salesman” has an approximate run time of two hours with a 15-minute intermission.

For more information or to purchase tickets, visit backalleyproductions.org.