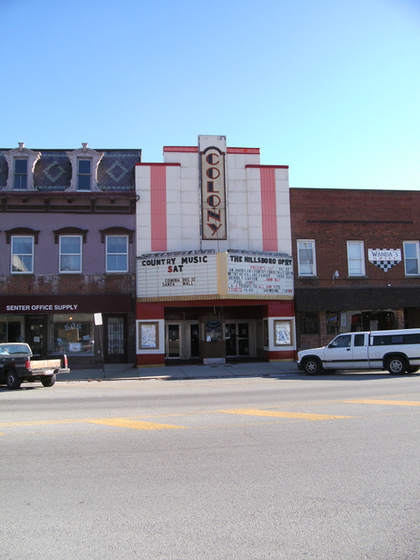 From the Times Gazette: Unlike its leaky roof, the Colony Theatre’s fate seems sealed.

The historic theater’s future as a mere memory seemed almost certain Wednesday after construction experts, city officials and a representative of the historical society toured the dilapidated facility.

Hillsboro Safety and Service Director Todd Wilkin led visitors through the North High Street building, with everyone dodging water that was pouring from the ceiling even though skies were clear outside.

The Times-Gazette toured the building in December 2014 when Mayor Drew Hastings led visitors through the facility, and the damage, disrepair and noticeable moldy atmosphere that was evident then was even more accentuated on Wednesday.

At Monday’s city council meeting, council President Lee Koogler placed the Colony into the Property, Maintenance and Restoration Committee for review, but Wednesday it seemed clear to everyone on hand, including Koogler, property committee chair Ann Morris, city Auditor Gary Lewis and Highland County Historical Society member Avery Applegate that demolishing the structure was the only viable option.

Also on hand were engineer Jack Wright and demolition expert Jim Bailey, who conferred with Wilkin throughout the tour about the challenges of tearing down the old building.

The theater, originally part of the Chakeres chain, was built and equipped in 1938 for $75,000. Over the years, the Colony has been privately owned, gifted to the city, and turned over to non-profits to manage. Ownership of the theater reverted to the city again in 2014. The city has been utilizing the theater’s marquee to share messages of upcoming events or city services with motorists and passers-by.

But in its heyday, the Colony was considered a palace. The Press Gazette of Sept. 16, 1938 described the grand opening of the theater.

“The auditorium is a structure of indescribable beauty,” the story read. “The ceiling of dark blue has a modernistic tapered panel effect and is indirectly lighted. The side walls are of modernist design and finished in rich tones of deep red tapering into light rose. On either side of the auditorium are four large relief murals each depicting a milestone in America’s progress and all are indirectly lighted.”

The relief murals remain intact, and on Wednesday Applegate in particular expressed interest in removing them for safe keeping before the structure is taken down.

But when Bailey took a closer look and actually chipped a small piece from one of the murals, everyone was surprised to discover that the relief figures on the murals were made of nothing more than something akin to fiberboard which had been painted, rather than the stone or concrete most had long believed them to be. Still, Applegate said she hopes to preserve at least one of them.

Everyone present Wednesday agreed it was unfortunate that roof vents, flashings and overall roof construction had not been more carefully installed to prevent the water damage that has made the facility virtually unsalvageable. If not for extensive water damage, the theater might be saved, they agreed. As it is, water was steadily dripping into parts of the theater Wednesday from where it had pooled at various places on the roof after recent rainfall and storms.

Since becoming mayor, Hastings has discussed plans to save the theater with a number of interested individuals and organizations. But no one was able to put together the financing – estimated anywhere from $250,000 to $400,000 – to make needed repairs to the roof and other structural and interior deficiencies. Even when the theater was inhabitable, various organizations struggled with providing enough attractions to make the venue profitable.

More recently, the mayor floated the possibility of a compromise that would save and maintain the façade of the Colony, along with its lobby, but dismantle the theater itself in favor of more parking in the uptown area.

But even hopes of maintaining the front lobby of the theater seems impossible now, considering the extent of damage there, although Wilkin suggested Wednesday that the city might decide to allow any new construction at the site to duplicate the look of the Colony’s façade.

The general consensus that the building cannot be saved was in line with a letter the city recently received from the Hillsboro Area Economic Development Corporation, which stated after a recent tour of the facility, “We were taken aback by the condition of the property, especially the said front part. In our opinion, the entire building has deteriorated beyond the point of renovation.”

Wilkin, Wright and Bailey also discussed the challenges they will face in demolishing the building while making sure not to damage adjoining structures. Bailey suggested the process could take six weeks from start to finish.

Cost estimates will be procured to demolish the building, with plans for a parking lot to replace the property where the back of the theater now exists, helping address a common complaint in Hillsboro about a lack of uptown parking. Council will ultimately make the final decision. 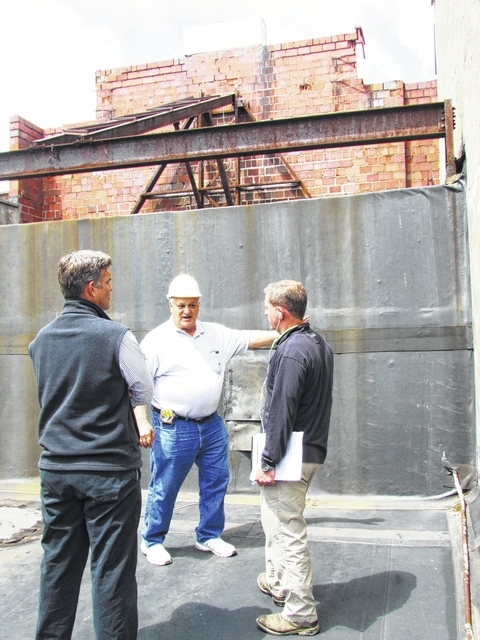