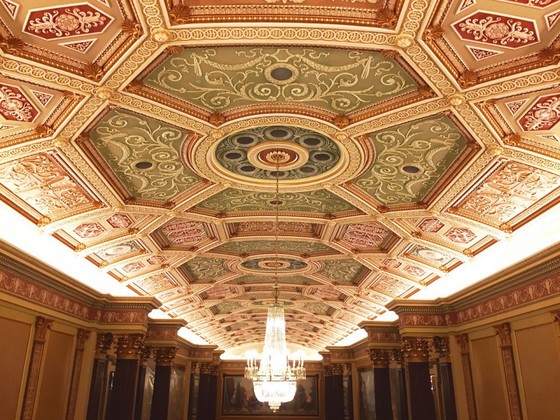 From Cleveland.com: Playhouse Square is turning back the clock 95 years in the Ohio Theatre lobby Thursday by unveiling a spectacular re-creation of the long-lost neo-Renaissance interior designed by architect Thomas Lamb.

The original largely burned to a crisp in 1964, leaving little trace of its ornate splendor. Now, however, it’s 1921 all over again.

Lamb, described as a “king of theaters” in his 2008 New York Times obituary, would have been proud.

The theater district plans to mark the completion of the project Thursday night with a sold-out fundraising party accompanied by an 8 p.m. performance on the Ohio stage by rock singer Michael Cavanaugh.

Regular programming then resumes at the theater, whose calendar includes the Playhouse Square Children’s Theater Series, the Great Lakes Theater Festival annual performances of “A Christmas Carol,” performances by DanceCleveland and events related to the Tri-C Jazz Fest.

In its long life after the fire and before the current project, the Ohio has been used as a movie theater, abandoned and left to rot, and then revived as part of the nationally significant rebirth of Playhouse Square.

Until now, however, a series of renovations did nothing to evoke Lamb’s original lobby.

Loews installed dropped ceilings after the fire, painted the walls red, and operated the Ohio until 1968 as a movie theater before letting it go dark.

Tom Einhouse, Playhouse Square’s vice president for facilities and capital, who oversaw the recently completed project, remembers going to the Loews as a child in the mid-1960s and not liking it.

“It was dark and red and smelled,” he said.

In 1982, a decade after volunteers and civic leaders saved the Playhouse Square theaters from demolition, the Ohio reopened with a somewhat makeshift lobby.

“There was no hope or understanding [at that time] that we could re-create what we’ve re-created,” Einhouse said.

A grant from the Reinberger Foundation in the 1990s provided enough cash to create a playful postmodern-style lobby interior for the Ohio, with fiber optic stars twinkling in a midnight blue sky over bright white faux-classical columns, balustrades and sculptures.

But Einhouse and others at Playhouse Square yearned to bring back Lamb’s original.

Thanks in large part to a $3 million grant from the George Gund Foundation, for which the re-created lobby is named, they got their chance.

The project, which cost $5.3 million in all, involved complex digital technology and traditional hands-on craftsmanship.

They extracted data points, enabling them to reproduce the pattern on the lobby’s original carpeting, along with nearly all the plaster ornamentation.

They also pulled new molds from the Corinthian columns in the nearby Allen Theatre, designed by architect C. Howard Crane and completed in April 1921, two months after the Ohio.

Einhouse discovered through the digitized photographs of the original Lamb column capitals that they matched those of the Allen, even though two different architects designed the theaters.

He theorizes that contractors working on both theaters acquired the same column capitals from Fischer and Jirouch, the Cleveland firm that supplied both projects, and which still creates architectural ornamentation today.

EverGreene’s specialists completed the project over the past year. The work included using vintage photographs to re-create three 10-by-30-foot murals that graced the original lobby with images of “The Triumph of Bacchus,” “The Muses of Poems and Music” and “The Birth of Venus.”

The murals aren’t exact reproductions because they draw on diverse sources, including the 17th-century Baroque classical paintings of French artist Nicolas Poussin.

The Muse of music also appears to be a near-copy of an early 19th-century painting by Charles Meynier in the collection of the Cleveland Museum of Art.

Jeff Greene, founder and president of EverGreene, couldn’t confirm Thursday morning whether his designers actually used the museum’s painting as their model, although the visual evidence seems indisputable.

The completion of the lobby marks the latest achievement of Playhouse Square’s $100 million Advancing the Legacy capital campaign.

The lobby is also part of an $8.1 million project that also included refreshing the interiors of the Ohio and the adjacent State Theatre, both designed by Lamb.

With that work now finished, Playhouse Square has, in effect upgraded or updated all five of its historic stages, including the 2,800-seat Connor Palace, the 3,200-seat State, the 500-seat Allen and the 550-seat Hanna. The Ohio has 1,000 seats.

When asked about whether he had a sense of completion, Einhouse said, “Playhouse Square is never finished.”

In all seriousness, he said, the theaters need constant maintenance, which in part explains the motive for the district’s capital campaign.

“I feel like somebody gave me the keys to a Lamborghini and said, ‘Test-drive this thing for a year.’ ”

Read the article and see an extensive photo gallery at: http://www.cleveland.com/architecture/index.ssf/2016/05/ohio_theatre_lobby_reborn_52_y.html 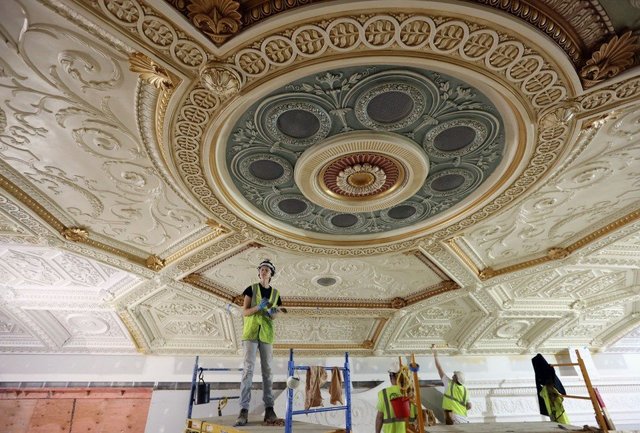 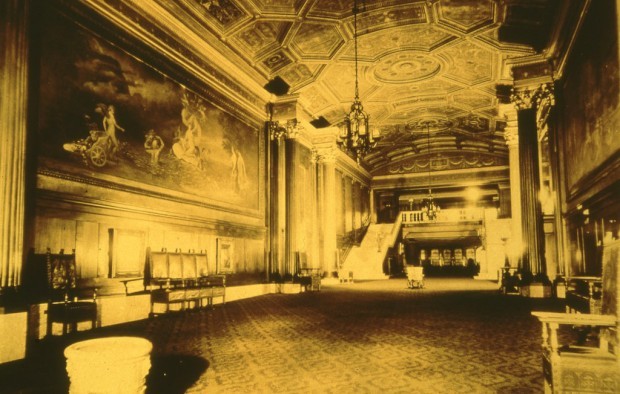 Wow, what a gift. It looks like they did a fantastic job. Goes a long way to making up for what they did to the Allen, although I understand it must have had to do with keeping Playhouse Square viable. They must be still be doing well to attract this kind of capital.

Wow!! It looks beautiful now that it’s all renovated!