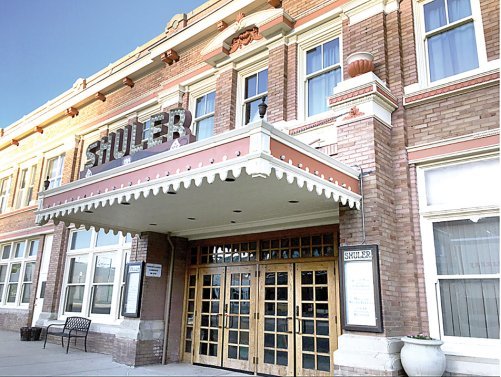 From the Newton Daily News: For years, the Shuler Theater in this once-booming New Mexico mining town sat empty in a desolate downtown. It had long passed its heyday as a hot spot for Italian immigrants and Hispanic workers who visited to take in a traveling show or a newly released movie.

But today the 101-year-old Raton venue again is attracting audiences from as far as Trinidad, Colorado just across the state line for variety shows and will soon be ready to screen any Star Wars movie. That change comes as New Mexico is joining other states in pushing an initiative to revitalize downtown districts in isolated, small towns by rehabilitating aging, historic theaters.

An economic development program, similar to efforts in Iowa and Illinois, seeks save the often-forgotten facilities like the Shuler Theater with help on refurbishing buildings and grants for new digital projection and sound equipment. With state funding, cities can develop new business plans and retool theaters’ dusty interiors so they can become main attractions in rural areas, New Mexico Economic Development Department Secretary Jon Barela said.

“These theaters are part of our history,” said Barela, who went to a small theater in Las Cruces as a child. “They are beautiful architectural gems and they are anchors of the community.”

Like refurbished small theaters in other states, New Mexico officials believe reviving theaters in ranching towns and small cities near American Indian reservations will help create jobs in struggling downtown districts and spark excitement in entertainment deserts. Some, such as El Morro Theatre in Gallup, New Mexico, are located along the iconic Route 66 next to the Navajo Nation while others, such as the Lyceum Theater in Clovis, sit just across the New Mexico-Texas state line.

The theaters serve as places audiences can take in a newly released film or play.

Barela said he came up with the idea about reviving theaters after visiting Raton’s Shuler Theater and learning about planned renovations. Hours later, he was in Clayton and hearing about the closing of its theater. Residents in the northeastern New Mexico community would be forced to travel around 80 miles to see a movie, he discovered.

Barela said he had no idea that similar publicly and privately funded programs were taking place in other states.

Ken Stein, president of the League of Historic American Theaters, said a historic theater in a small city has the potential to sustain 27 full-time-equivalent jobs and generate around $84,000 in revenue for state and local governments.

Bill Fegan, who helps run the Shuler Theater in Raton, says the revamped venue is already helping the city’s downtown. This week, a new Italian restaurant opened. “We have people walking around downtown when we have shows,” Fegan said. “It feels alive.”

Tabatha Lawson, executive director of Lovington Main Street in Lovington, New Mexico, said the newly refurbished Lea Theatre is keeping residents in town for entertainment. “Some residents are so excited because they remember coming here as kids,” Lawson said. “And they end up telling us about their first kiss.”

Read the entire story at: http://www.newtondailynews.com/2016/05/24/new-mexico-joining-effort-to-rehabilitate-historic-theaters/ah2zu5z/

Given the current rate of immigration, the mixing of genealogies will eventually be unavoidable. Particularly bad are illegal immigrants because you can’t even count them to get an accurate picture because they not only take jobs away from the citizens. Special pieces provide an excellent description of this issue. If you’re interested, you can read it here as well. Visit my website to learn more for immigration https://supremestudy.com/essay-examples/immigration/ . I believe it will make things clearer for you.

Given the current rate of immigration, the mixing of genealogies will eventually be unavoidable. Particularly bad are illegal immigrants because you can’t even count them to get an accurate picture because they not only take jobs away from the citizens. Special pieces provide an excellent description of this issue. If you’re interested, you can read it here as well. Visit my website to learn more for immigration https://supremestudy.com/essay-examples/immigration/ . I believe it will make things clearer for you.