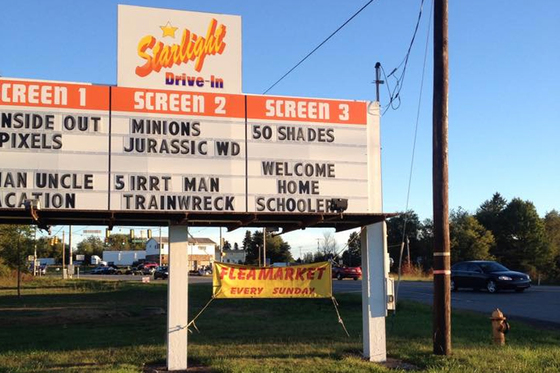 From Pittsburgh.cbslocal.com: Drive-in theaters were once as American as snack bar food during intermission.

Butler’s Pioneer Drive-In opened in 1958. The old theater and snack bar were showing their age when John and Beth Manson purchased and renovated the theater they had visited over the years.

“We come here on a Friday or Saturday night,” John Manson said. “Pop the hatch, have pillows in the back, lay down, unwind from the week, catch a couple of movies. And we often would talk about what would we do differently if we owned it. Well, we own it now, and we implemented those changes.”

They still own a 35-millimeter projector, dating back more than 50 years. It will show a handful of movies through the year. But it will then be replaced by digital, joining two other computerized projectors the couple has already purchased.

The price tag for the new technology has put most drive-in theaters out of business. The Starlight’s renovated snack bar, and a wider menu, will help pay the bills.

“To be able to keep this open for future generations is one of those things that’s been very important to us,” the owner concludes.

He says the drive-in is pet friendly, and promised that Sunday flea markets on the grounds will continue.

Read the full story and see the video at: http://pittsburgh.cbslocal.com/2016/05/27/couple-buys-renovates-butler-drive-in-theater/