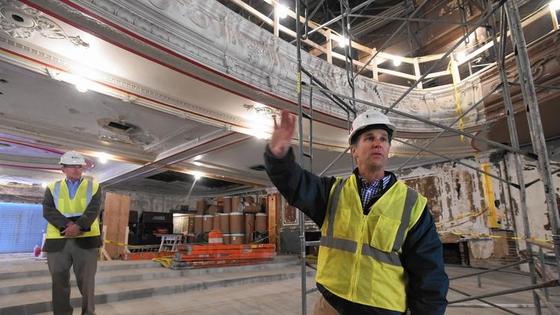 From The Baltimore Sun: The first block of West North Avenue lost one of its longest-tenured commercial presences this week. A place my family long called Dr. Fouch’s drugstore disappeared during an eight-hour demolition.

The razed structure at the southwest corner of Charles and North avenue put in decades of hard work. It seems to have been a neighborhood drugstore from the 1880s through World War II.

William Fouch, recalled as a tall man with a black mustache, got his pharmacist’s diploma in 1886. He died in 1946.

The building later served as a Peoples drugstore, then changed careers — a White Tower hamburger shop, then a White Coffee Pot restaurant and finally the Chicken Box, where a neon sign famously described a dish as “mec and cheese.”

The building’s last act was home to the Station North Arts and Entertainment offices, as well as the Annex Theater.

Yet as the heavy equipment plowed into its bricks, the spot is giving way to help another landmark. The building will be replaced by architects Ziger/Snead’s addition to the 1915 Parkway Theatre.

The new structure, which will contain two film auditoriums, is part of the $18 million redevelopment of the Parkway as the Stavros Niarchos Foundation Parkway Film Center.

I can attest that the project is on schedule to be completed in time for the 2017 Maryland Film Festival. This week I stood on its new concrete floor and saw the risers for the new seats.

Officials from Southway Builders, who are serving as construction managers, led a tour of the theater where I was last a patron in the mid-1970s. The building has been largely vacant for nearly four decades.

As he stood under the playhouse’s majestic plaster ceiling dome, George Arendt, Southway’s senior project manager, described some of the challenges the team has encountered — and the progress of his crew’s work. “The Parkway was neglected and deteriorated,” he said. “Water has been pouring into the building.”

Interior scaffolding has been erected so plaster artisans can begin the task of repairing what rain destroyed — the Georgian-style filigree plaster detail work.

“The Parkway is a brick, steel and concrete structure,” said Arendt. “The plaster is the interior finish. It’s quite a finish, too.”

The timetable calls for a new roof in May, followed by asbestos abatement. Then the artisans from Evergreene Architectural Arts start to bring back the playhouse’s candy-box beauty.

We often think of sweet snacks at a movie house, and the Parkway had its own second-floor refreshment area, called a tearoom, where chocolates, sodas and ices were once served along with tea.

Southway’s initial work on the building revealed original plasterwork and dimensions of this refreshment area, which overlooks North Avenue. It was cut in half when the Loew’s theater chain acquired the Parkway and enlarged the restrooms. Loew’s also did away with the box seats.

The first work brought surprises. Like any worthy archaeology site, Parkway has multiple layers — two levels of mosaic floors: a 1915 tile floor and a 1926 tile area at the entrance.

The work brought an inspection of the plaster grilles that shielded pipes for the silent film-era organ that accompanied movies. Water damage compromised the finely detailed plaster webbing. When it fell apart in places, it revealed that the diamond-shaped panels were held in place with ropes coated in plaster.

A few weeks ago, the contractors removed what they called “the dog house,” a rooftop concrete structure that housed a huge fan. It drew rising hot air through an intricate system of ventilation chambers. Some of vents were masked by the theater’s fantastic plaster medallions and sunbursts.

The Parkway’s projectors are expected to be rolling again in time for the 2017 film festival. Southway Builder’s Arendt sees the big picture:

“The excitement of bringing this place back to life is awesome,” he said.

Good to find this valuable post. When I read your article I get some useful details for my work. I would like to say thanks for the good posting share with us. Low Cost hosting companies best web hosting services at the very lowest price.