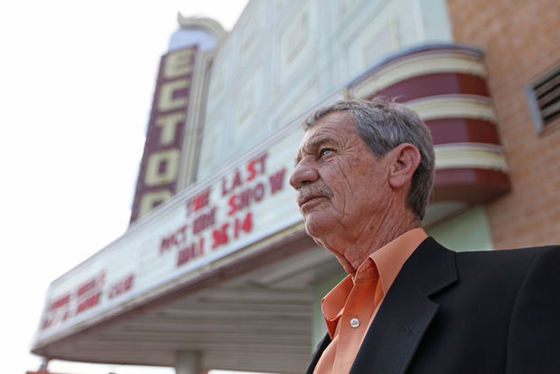 The Ector Theatre that drew families to the center of a humming downtown finally faded from its old glory in 1985, when its original owner locked the doors after more than three decades and walked away. By then, it had become a financial burden.

But for the last 15 years, Don and Toni Stice kept the historic venue alive even in the age of the multiplex. They leased the building for a pittance from the City of Odessa, which bought the 1950s-era theater in 1994 for $155,000 in federal funds with hopes of keeping it open to the public.

He served as the artistic director and her as the business manager keeping the books. Performers and the classic films returned to the marquee.

“They loved being entertained by that,” Don Stice said in an interview inside the Ector Theatre, where he first came to work in 1959 as a projectionist. “They love going back in time. I call this place a time machine.”

That ends this month, after a final series of events, as the city begins laying the groundwork for a downtown hotel and convention center estimated to cost some $77 million and incorporate the theater. The city will not tear down the Ector Theatre but officials are still working out the specific plans about how to renovate and reopen it.

But first, there will be a performance by a Johnny Cash tribute artist on May 7. Then, the Ector Theatre will show “The Last Picture Show” on May 13 and May 14.

Finally, after a couple junior high choir shows and an Odessa High reunion, the Ector Theatre will close.

“What we wanted, we want the people aware that we just have one more movie and one more live show and we want people to come out and enjoy the theater,” Don Stice said. “Because it’s going to be down at least a couple of years probably.”

They will also have a night for dozens of volunteers and family members who worked at the theater.

When the city bought the theater in the mid-90s, officials planned to open a multicultural center. But those plans collapsed, and three years later, the City Council would vote 3-2 to spend another $150,000 renovating the theater in hopes of opening it to the public again.

Finally, on Aug. 4, 2001, city leaders cut the ribbon on the renovated and newly opened theater.

Soon, the theater again started to feel like a burden, and city officials sought outside management. The Stices jumped at the chance in 2001, with Don Stice dreaming of hosting the sort of shows featured in the theaters of Branson, Mo.

They never turned much of a profit. At most, Don Stice said the couple earned about $1,000 a month. But those were in the early days, when a show could draw more than 500 people. After the Wagner Noel opened in October 2011, attendance plummeted by about 40 percent, Don Stice said.

In the years since, Don Stice said the theater struggled to recruit new acts and leaned heavily on performers paying tribute to artists like the Temptations, Elvis and Roy Orbison.

different forums are discussing about this stuff but they are still unsure about it. For any query related to such people should check missed call auto reply as they have their own forum. I believe that this will eliminate all the doubts.