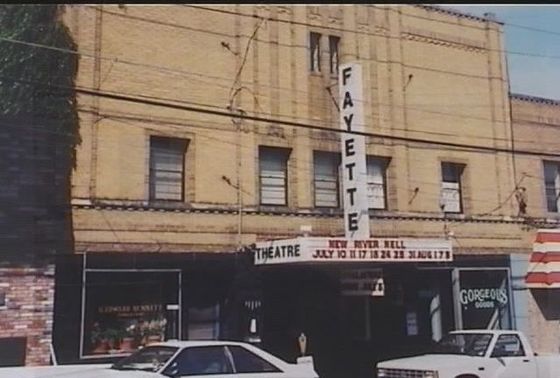 From the Fayette Tribune: The Historic Fayette Theater has served the community of Southern West Virginia for the past 23 years. However, the historic building in which it is located has had some limitations. The restrooms are currently located on the second floor, accessible only by a flight of steps. Creating handicap-accessible restrooms has long been a priority for the HFT’s Board of Directors and this summer the renovation work will finally commence.

The entire lobby will be renovated and will include two handicap-accessible bathrooms. This work will be funded in part by a generous fund dedicated to the memory of Alice Todaro.

Alice Todaro was long time supporter of the arts in general and the Historic Fayette Theater in particular. She served on the Board of Directors and regularly attended performances. She even appeared in several productions, telling people that the role she liked the best was when she shot the prop gun simulating the assassination of Teddy Roosevelt in Gene Worthington’s rendition of Bully.

Her family has established the Alice Todaro Lobby Renovation Fund. Anyone wishing to make a donation to the theater in Alice’s name is invited to do so. The renovations will be completed by Hearth and Homes of West Virginia and will begin this month. Plans include opening the existing lobby with an archway into the adjacent office space. Two handicap-accessible bathrooms will be built in that space. In addition, the theater office will be located there. This will also make purchasing tickets on Tuesday and Thursday nights more accessible.

The fundraising efforts kicked off with the last play production at the theater. “The Secret Garden,” based on the classic children’s novel, was presented in early May. As part of the set design, spring flowers were donated by Kroger and Lowe’s. Each night, the flowers were raffled off to audience members. Winners of the flower raffle were Coet Combs, Anita Lanham, Peggy Smart, Rebecca Stinnett, Logan Treadway and, ironically, Jeannie Todaro. The raffle was extremely successful and raised $450 for the project.

“This is a project we have needed for some time,” said HFT Board President Gene Worthington. “Accessible restrooms and box office are an important way for us to serve our audience better.”