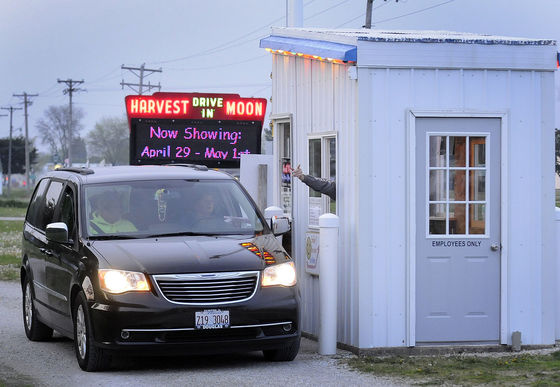 From the Daily Journal: There are generations of movie fans who don’t get the drive-in theater concept. They would ask: Why would you want to sit in your car and watch a movie through your windshield? Don’t you have your phone or iPad?

And there’s an older generation of people who don’t know that today’s drive-in theaters have kept up with technology. These throwback theaters use digital projection and a modern sound system. You hear the soundtrack through your car’s stereo system: Those low-fidelity speaker boxes, the kind you used to hang on your car window, are gone.

Movie lovers of all generations still can find common ground these days, on the parking lot of the Harvest Moon Twin Drive-In in Gibson City. This throwback from the “Happy Days” era is not only showing contemporary movies, it’s been named third among the nation’s Top 10 outdoor theaters by popular vote in a USA Today poll.

Owner Ben Harroun, of Onarga, seems to have found his niche, fighting the trend that nearly killed this business in the 1970s. At its peak, there were more than 4,000 theaters lighting up the landscape. One New York drive-in was so big it could accommodate 2,500 cars. The latest estimates suggest there are less than 350 of these theaters in operation today.

“But these theaters are actually making a comeback these days,” he explained. “You have to work at it, but we have been profitable. We tend to reinvest it all in the theater, but you have to understand, this is in my blood.”

Ben and his brother, Will, will tell you they’ve spent their life at this theater, ever since their father Mike reopened the place in 1989.

“It opened first in 1954, and it was in pretty bad shape by the time Dad got it,” Ben said. “The real estate sales guy tried to talk him out of it. It needed a lot of work.”

But Mike invested his life savings and gathered some other investors to make the purchase. Then he went to work.

“He made it a twin theater when he got the old screen that was at the Starlight Drive-In in Kankakee,” Ben said. “We upgraded the snack bar and the grounds. And the crowds started coming back.”

The Gibson City theater, on Illinois Route 47, is at least an hour drive from much of the Daily Journal readership area. It’s 76 miles from Grant Park, 58 miles from Bradley and 46 miles from Watseka. But the experience is a rare one.

You can sit in your car or bring lawn chairs. Friendly dogs are welcome but should be on a leash. You can smoke, but don’t leave butts on the grounds. And you can look like a regular at the Harvest Moon if you drive your pickup, back into a space and use the truck bed for your party zone.

Snack choices here are a little confusing these days. The concession stand offers everything from corn dogs to caramel corn, soft pretzels, root beer floats, burgers, mini-donuts and pizza. There’s also a $5 “food permit.” This allows customers to bring in their own snacks and includes a certificate good for two drinks or a large popcorn. Then, a portion of the permit income goes to charity.

“Yes, we need the concession stand income, but we also know we can’t keep up with the crowds some nights, so we think this is a good compromise,” Ben said, noting a full house will fill about 450 parking spaces.

Ben is the kind of showman who gets attention, even if fans aren’t interested in the films showing that weekend. This weekend’s features include two double features: “X-Men: Apocalypse” and “Neighbors 2: Sorority Rising” on one screen, with “The Angry Birds Movie” and “Teenage Mutant Ninja Turtles 2” on the other. But if the movies don’t interest you, Ben sponsors a popular Frightfest in October. Other plans call for 12 more special events, including a 5K run and car shows.

Admission, to sit in your car, the back of your truck or on lawn chairs, is $7 for adults. Children 4 to 11, who traditionally fall asleep in the backseat, get in for $6. Kids younger than 4, who come prepared in their pajamas, get in free.