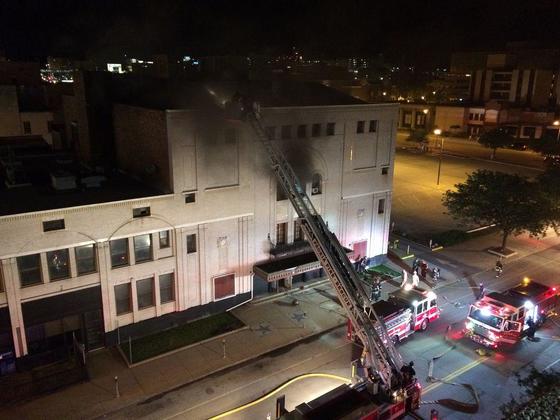 From WQAD.com: An abandoned yet historic Peoria theater has been damaged after a fire broke out inside and investigator say they believe it was arson.

The Peoria Journal Star reports the fire ignited late Saturday inside the Madison Theater in downtown Peoria. Brad Pierson is a fire investigator with the Peoria Fire Department and told the Journal Star the fire appeared to have been started in several parts of the old building.

Streets and a nearby bar were closed as firefighters worked to put out flames.

Peoria fire officials gave a preliminary estimate of $100,000 in damage done to the theater.

The 96-year-old building was listed on the National Register of Historic Places in 1980. In 2013 Landmarks Illinois listed it as one of the state’s most endangered historic places. It was closed in 2003 when city inspectors determined it needed safety upgrades.

Bill Ordaz, president of the Central Illinois Landmarks Foundation, says the theater is “a critical part of Peoria” that “still has potential.”

More than a half-dozen fire trucks responded to a blaze in the back stage area of the venue. Battalion Chief Tom Carr, with the Peoria Fire Department, said the it appeared the fire started about 10:40 p.m. An investigator was on the scene early Sunday to try to determine how the fire started.

After firefighters began to leave about 12:40 a.m. Sunday, at least one hot spot reignited.

It’s too early to determine how much damage was done to the structure, Carr said, but it could amount to more than $100,000.

Officials cordoned off the block of Northeast Madison Avenue between Main Street and Hamilton Boulevard as firefighters used an aerial truck in their attack. Large crowds gathered at each end of the block to watch.

The Fire Department closed Club Purple, adjacent to the Madison, but allowed the Judge’s Chamber and Hoops to stay open as they fought the fire.

Black smoke could be seen coming from various areas of the building. About 12:10 a.m. Sunday, crews began the process of clearing the scene, only to have to go back inside once the fire reignited.