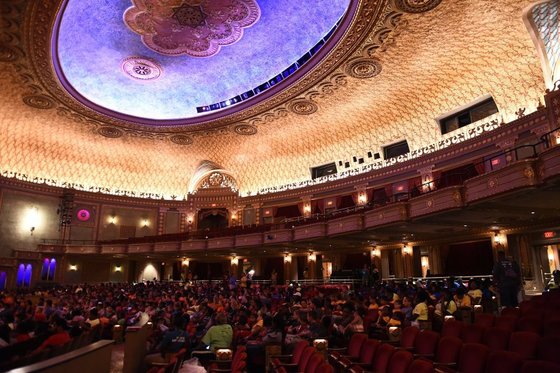 From the Knoxville News Sentinel: The Tennessee Theatre had its best attendance month ever in April, drawing more than 25,000 patrons. And right now it is on track to recording its most successful year in history. Not to be outdone, the Bijou Theatre across the road has experienced its first profitable period in its modern history.

“April was an amazing month for both the Tennessee and the Bijou,” said Ashley Capps, who founded AC Entertainment 25 years ago. “The Tennessee had its most successful month ever, by any metric. ‘The Book of Mormon’ drove that along with a number of sellout shows.”

This is no overnight success. “I would love to say that we had this impulse to revive the theater and that we knew what we were doing,” he said. “But we were making it up as we went along.”

In 1996, James Dick, the owner of the Tennessee Theatre, gave AC the opportunity to take over the day-to-day operations and management. “When we took the reins at the Tennessee Theatre we had one primary objective — we didn’t want to see it close, its future looked a bit shaky,” he explained.

“In the late 1990s, the theaters were in rough shape,” Capps said. “The bones of the Tennessee were in good shape but there were no amenities for touring personnel and the dressing rooms were fairly frightening. The tractor-trailer trucks had to pull up on Gay Street and roll everything in through the lobby onto the stage, all of these heavy cases with sound and lights and band instruments were not good for the lobby.”

AC leveraged its extensive network of venues and festivals and industry experience to bring top acts to Knoxville. AC are co-producers of the Bonnaroo Music & Arts Festival with Superfly Productions and the producers of Big Ears Festival and other events in Ontario, Kentucky, Alabama and North Carolina.

“We were young and aggressive,” Capps admitted. “We just rolled the dice and worked it really hard. We were able to bring some amazing acts.” Capps recalls Chet Atkins performing his last concert and Johnny Cash performing his last full concert, and Bob Dylan and Santana all taking to the Tennessee Theatre stage in the late 1990s.

At the time, The Tomato Head was the only restaurant open downtown at night. “Most of Gay Street was boarded up, buildings were empty,” he said. “I remember a visitor driving downtown, rolling down his window — I thought he was going to ask for directions, but he asked what had happened there? It was like a ghost town.”

At the same time AC had to overcome the fact the Tennessee Theatre was designed as a movie house, not a modern concert venue. “I’m a Knoxville native, my first memories are going there as a little kid,” Capps said. “We would go to see all of the first run movies, I would see Disney and John Wayne movies when I was 5 years old.”

In a sense it has all become easier, according to Capps. “The big challenge is that there is a lot more of it. The challenge is not so much booking it but managing it. With all of this volume, still delivering the highest experience that we can. Being committed to crafting an experience for both the artist and the fans.

“For the theaters, we are the staff, that’s the simplest way of looking at it,” Capps said. “We take care of all of the day-to-day operations, manage the theater and the calendar.” AC also works closely with the Knoxville Symphony and Knoxville Opera as well other groups that want to use the theaters.

With just 1,600 seats, the Tennessee is considered a secondary venue making it financially challenging for many promoters. Capps said that they make it easier for those outside promoters to use the theater effectively.

“They are definitely different,” Capps said of the two Gay Street theaters. “The philosophy is similar. (However) because of its size and amenities you could never do a real touring Broadway production in the Bijou. It is a little scrappier, it requires a lot more from our team in some ways — they are super hands-on with every aspect of the show.”

AC Entertainment is not resting on its laurels. “We are always looking for ways to further develop programming for everything that we do, I’m very excited and proud of what we have accomplished up until this point,” Capps said.

The Bijou is primed for a whole new phase of its existence, according to Capps. “We are excited to be working with the Bijou, crafting the vision for the next 10 years and really exploring the other facets of what the Tennessee Theatre can be in the future.”

Although the theater has been active for almost 88 years, Becky Hancock, Executive Director of the Tennessee Theatre, said the real turning point was when it was restored and renovated in 2005 so that it could function in the 21st century.

“But a crucial component was making sure that the theater could book and secure great entertainment,” she said. “We are fortunate to have AC Entertainment in town. Their management and bookings have played a great role. They have great contacts with artists, agents and producers, they know the market well and they know the venue well, they have been an integral part.

“April is the top of the heap, we have been doing very, very well,” said Hancock of the theater’s success. “For the rest of the year things look good. We don’t book too far out in advance, Ashley would be the first to tell anyone that it is a volatile industry, it’s affected by many factors. In some ways we hedge our bets, but I feel that the formula we have will work well.”

Hancock agreed with Capps that expanding programming is important. “Children are the audience of the future, we have to establish a connection between the theater and the children in the community, so that when they grow up they will want to spend their money at the theater. Those memories are what we want to continue to offer.”

As a nonprofit, the theater strives to provide access for minorities, senior citizens and those in rural communities. “I have to raise money to take care of the building and for programs that don’t pay for themselves. Without the shows that AC brings in, the success of those shows, my job would be so much harder,” Hancock said. “The AC Entertainment staff work with the (Tennessee Theatre) foundation staff and make sure the building is professionally run every day. Whether we are doing a huge Broadway production or open house and everything in between.”

As a star of multiple local television commercials and selfies, Hancock said the theater has become an inextricable part of Knoxville’s identity. “It’s less about numbers and more a measurement of the heart,” she said. “Do people love the theater because of the shows or can we have great events and shows because the theater is loved — I think those two parts are inseparable.”

David Arning, Board President of the Bijou Theatre, said that this is by far its most financially successful period since it reopened 10 years ago. “Not just financially but with programming,” he said. “In terms of more shows and more diversity, and with rental opportunities — by churches, civic and commercial organizations. The lights are on more than they have ever been.

“Since I’ve been on the board for the last six years, the goals have been to use the theater more, explore more ways to add diversity, music, performing arts and children’s programming,” he said.

The credit, according to Arning, belongs to those who came before him, the earlier board members who decided to pay down the $1 million debt the theater had incurred. “To make sure it is here for generations to come,” he added. “It is less than half of what it was when I first came on.”

He also added that AC Entertainment’s expertise in finding the right acts and when to get them is what has kept the theater full and profitable. Coupled with a focus on renting out the theater at other times. “They were part of that strategic planning, deciding what were the right shows and the right scale of operations,” he said.

Arning also agrees with Capps that the 200-year-old “Lamar House,” which houses the theater, also needs some attention. “We would like to see the vision of what that corner can be,” he said. “The board and AC share a vision of renovating it, making it structurally sound and really making it a destination and a hub where people will want to congregate seven days per week.

“In the past we were struggling to make ends meet,” Arning said. “Those days are behind us, the Bijou is financially sound and now it’s an opportunity to focus on what it can be.”

The success of the Tennessee and the Bijou go hand in hand, according to Arning. “A lot of the artists that sell out at the Tennessee used to sell out the Bijou. And the overall revitalization of the theaters are one of the biggest reasons that downtown has been rejuvenated. All of the entertainment helps one another.”

People have asked Capps if the recent addition of The Mill & Mine venue will hurt the Bijou and the Tennessee. “If it’s well done, it becomes the case of a rising tide raising all boats and it develops the scene for live entertainment even further,” he said. “We love the Tennessee and the Bijou — they are incomparable experiences, we want The Mill & Mine to be a different experience.”

The Mill & Mine was the missing link in the live music entertainment scene in Knoxville, Capps said. He explained that some artists thrive with an audience on their feet and dancing.

“We’ve struggled to get many artists to town at all because Knoxville lacked that type of venue. They kept skipping over us,” he said. “These days the experience is everything, it’s not just presenting the show it’s the environment.” 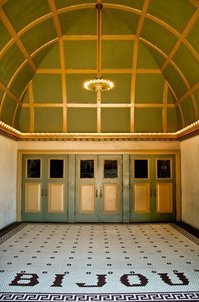 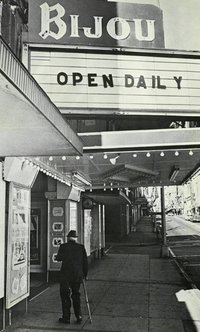