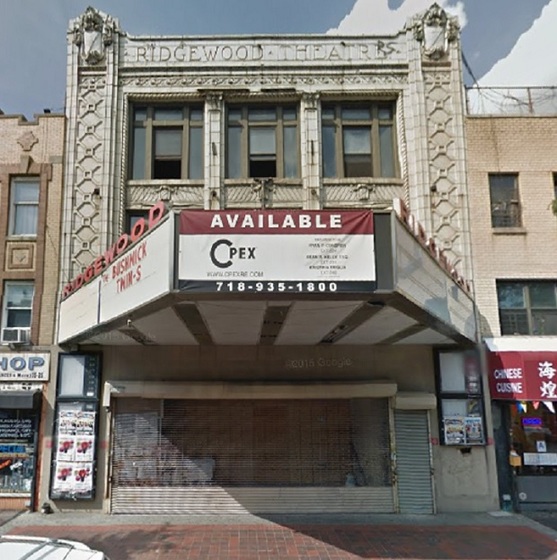 From qns.com: New apartments at blockbuster prices will soon be the feature presentation at the former Ridgewood Theatre.

The former moviehouse located at 55-27 Myrtle Ave. is being converted from a 2,500-seat, five-screen multiplex theater to a five-story, mixed-use building featuring a commercial space on the lower floor and 50 residential units on the upper floors.

One neighborhood expert, however, believes the new use for the former theater could be a boon for the community.

EXR, the real estate brokers for the property, have said that they plan on holding a soft opening for the apartments on Monday, July 18, and the first official open houses for the rental units on Saturday, July 23.

“The building offers an array of amenities unlike any in the neighborhood: a top-of-the-line gym, full-service laundry room, co-working office space complete with private meeting rooms, tenants’ lounge, planted terrace, lobby, elevator and a fully furnished roof deck with 360 [degree] views of the entire the Manhattan skyline plus Brooklyn, Queens, and what lies beyond,” said a spokesperson with EXR.

The Ridgewood Theatre was originally designed by famed theater architect Thomas W. Lamb and officially opened on Dec. 23, 1916. In the 1980s the theater was converted into a five-screen multiplex. With ticket sales declining, the Ridgewood Theatre closed its doors in March 2008.

The façade of the former theater received landmark status by the NYC Landmarks Preservation Commission in January 2010.

The building was gutted for renovations in November 2014.

Link to the story: http://qns.com/story/2016/07/12/former-ridgewood-theatre-advertises-new-apartments-for-insane-prices/