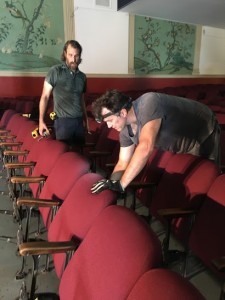 From Richmond Biz Sense: Inspired partly by the closure of a West End movie theater, two Richmonders plan to open a film center in a recently redeveloped downtown property.

James Parrish and Terry Rea plan to open in August the Bijou Film Center at 304 E. Broad St. The pair have a short-term lease for the 1,400-square-foot space on the ground floor of the three-story building.

“We wanted to bring movies back to Broad Street,” Parrish said. “We see it as a starter home. We’re going to start with folding chairs.”

The Bijou Film Center will show movies and sell beer, wine, coffee, popcorn and other food. The August opening won’t be for a fully realized Bijou, but the single-screen film center will have limited screenings until the building is fully built out later this year.

Prior to Bijou leasing space downtown, Parrish and Rea held four screenings at the Byrd Theatre in Carytown for the kind of hard-to-find movies they plan to show at the Bijou. Each screening attracted hundreds of filmgoers, and a Bijou membership campaign saw 400 people pay $50 each for annual memberships, Parrish said.

“It’s been a real barn raising effort,” he said.

Parrish is director of foundation relations at VCU and co-founded the James River Film Society. Rea ran the Biograph Theatre at 814 W. Grace St. in the 1970s. Parrish said since coming to Richmond in 1997 he’s always hoped to open a film center. Parrish said he and Rea got connected by way of the James River Film Society and are in the process of applying for nonprofit status for the Bijou. “We’re going to be showing films you can’t find anywhere else,” Parrish said.

The Bijou’s new home is owned by Matthew Bauserman, who bought the property in 2014 for $225,000. He also owns the building next door at 300 E. Broad St. where the coding nonprofit CodeVA is based. Bauserman bought that building in 2013 for $446,000, according to a city record.

He has since combined both properties and redeveloped them into three commercial spaces, seven second-story apartments and his own space on the third floor. Architect Walter Parks designed the project and UrbanCore did the construction for it.

In addition to CodeVA and the Bijou, the property is also used by TheatreLAB, a performing arts nonprofit. All the apartments have been leased by young professionals, Bauserman said.

The Bijou will open near the freshly minted apartments at Deco at CNB at 219 E. Broad St. and a slew of new restaurants along East Grace Street. The film center’s plans along East Broad Street were first reported by Style Weekly. 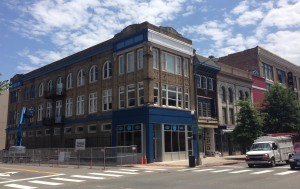