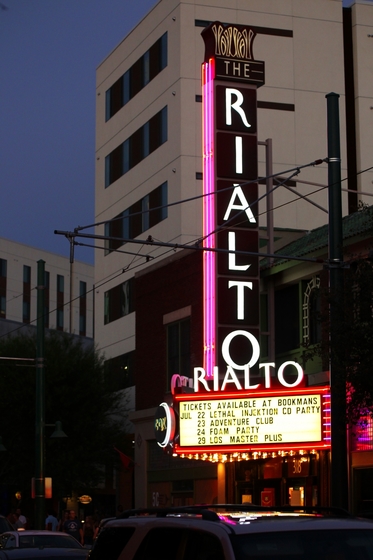 From the Daily Wildcat: Vaudeville, furniture sales, pornography and Español. Much like your attention-seeking little sister, The Rialto Theatre has gone through many distinct phases.

The iconic theater originally opened in 1920. Built in conjunction with its neighbor Hotel Congress (which opened a year earlier), had acts the likes of Ginger Rogers and the original black minstrel band to grace its stage.

The Rialto went through several reiterations, including a stint as a pornographic theater that showed the original screening of “Deep Throat.” The 1970s really epitomized the “Dirty T” for Tucson — contrary to present day, downtown was not the place to be.

The Rialto had a bad reputation and the theater was on the verge of being torn down to become a surface parking lot. Ironically, it took a boiler fire explosion to save the theater from being repurposed.

The theater shut down after the explosion in 1984 and remained abandoned until 1995. It wasn’t until 2005 that the Rialto reopened as a non-profit theater, part of the Rio Nuevo downtown revitalization project.

Through ticket and membership sales, The Rialto Foundation just recently gained enough funds to purchase the theater back from Rio Nuevo, and now it’s thriving more than ever.

“We estimate that we bring 150,000 people downtown each year,” said Julie Ragland, Rialto’s development director. “That’s got a huge economic impact of the downtown area.”.

The Rialto plays a huge role in the music and arts scene in Tucson. With musical acts ranging from Tyler the Creator to the Indigo Girls, the theater attracts every type of music fan possible. “Keep in mind that any act is on the table for us,” Ragland said. “We do a lot of rock and roll, electronica, blues, Americana, laser light shows, a lot of hip hop.”

The Rialto Foundation has partnered the theater with other live music venues around downtown, including the equally-as-iconic Fox Tucson Theatre. Sitting on opposite ends of Congress Street, Ragland said that these theaters were originally built to book-end downtown Tucson.

With its fixed seats and upscale decor, the Fox tends to cater to an older demographic. Concerts at the Rialto on the other hand are usually standing room only affairs, allowing patrons to dance their hearts away in a more unrestricted environment.

In addition to being the hub for live music downtown, the Rialto proudly displays visual and contemporary art in and outside the theater. Local artist Joe Pagac regularly paints murals of incoming musical acts on the west side of the building. On the other side of the theater, a new mural was just unveiled of ex-NBA player/Pac-12 Conference basketball analyst Bill Walton riding a jack rabbit (it’s a Tucson thing).

“We incorporate a lot of those more cutting edge, contemporary art pieces,” Ragland said. “We’re also still of course, and as part of our mission, committed to preserving and improving the historic theater.”

Downtown has gone through a serious facelift in the past decade and the Rialto Theatre has stayed right in the middle of it, acting as the artistic and cultural epicenter.

With the implementation of Tucson’s modern streetcar, getting to a show at the Rialto is easier than ever for UA students.

Ragland said that with big bars and housing moving to their part of downtown, it’s more than just students frequenting the theater—more of everyone is coming to the Rialto.

The Rialto’s calendar, as usual, is packed this fall—Ziggy Marley, The Silversun Pickups and Michael Franti & Spearhead all headline the theater in late August alone.

Electronic music producer Excision (Jeff Abel) brought his apocalyptic dubstep and bass to the Rialto Theatre for his 2016 Paradox tour, shaking the concert hall with 150,000 watts of thunderous sound on January 31. “We’re always adding new shows so sometimes we’ll have shows we’ll book a week or two out,” Ragland said. UA students should always keep an eye out for new shows—The Rialto often pulls artists touring in Phoenix down to Tucson. Though many touring acts actually prefer to perform in Tucson when they come to Arizona, because everything from the music scene to the size of the venues can feel more intimate.

Intimacy is perhaps the most enticing thing that the Rialto offers concert-goers. Seeing a performance from a band with just 1,000 other fans before they make it big and headline an arena the next year is truly a memorable experience.

Tucson may be a college town at heart, but we have an amazing music scene, and the Rialto Theatre serves as a loud and dazzling symbol of this city’s artistic soul.

There will be plenty of concerts and shows happening on campus this year—most will probably focus on forming a tight UA community.

Escape from that UA bubble for a night, though.

Take a walk under the Fourth Avenue underpass to see the bright Rialto marquee illuminating downtown and you’ll experience a more profound sense of community—one that bonds over good music and dances until midnight together.

Welcome to Tucson, Wildcats, and rock on.