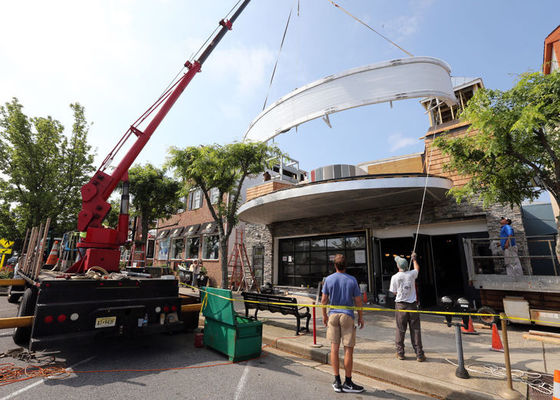 From the Press of Atlantic City: The marquee was hoisted atop the borough’s 1940s-era movie theater this week, as its new owners plan a mid-July reopening and a business model reflected at more cinemas across the country.

Nearly $1 million in renovations at the Harbor Square Theatre on 96th Street include widening chairs and aisles and cutting the number of seats, co-owner Clint Bunting said.

The movie house also includes third-party tenant Harbor Burger Bar, a restaurant that offers food and alcohol that can be consumed inside the theater.

And the theater will be open year-round, Bunting said. Its predecessor, Frank Theatres Harbor 5, was opened seasonally last year.

In the past five years, online streaming platforms such as Netflix have drawn moviegoers from theaters, according to research firm IBISWorld.

Bunting, a 48-year-old Delaware resident who also owns the adjacent The Walk at Harbor Square mall, says that makes it important to improve the moviegoing experience.

“Movies are now only for a short period of time at the movie house, and they’re going right into your home and TV,” he said. “That’s why we believe it’s very important to offer a unique, upscale experience for people to go to, as well as an experience the entire family can attend.”

The four-screen theater dropped from 770 seats to 540 to accommodate more aisle space and chairs that are at least 6 inches wider, Bunting said. All four screens have digital projectors, which cost $65,000 apiece, he said.

The renovations follow a pattern across the movie industry as cinemas move toward larger seats and upscale food and drink options at the expense of seating capacity.

The space will be used for live events, too. Bunting said he plans monthly comedy shows and musical acts.

Although Stone Harbor’s population swells in the summer with visitors and second homeowners, it has a year-round population of fewer than 900, U.S. Census figures show.

During the summer, Bunting expects the operation, including the restaurant, will employ about 30 people. That number may be closer to 10 in the winter, Bunting said.

“We intend to stay open year-round, even in the slower months of November through February,” he said. “We’re not building it just for the visitors who love that area. I’m a local person (in seasonal communities in Delaware), and my area over here is very seasonal as well. And I think the locals deserve to have an entertainment option not only in Stone Harbor and Avalon but also Cape May Court House and other areas, as well.”

Patrick Rosenello, part owner of Harbor Burger Bar, said the restaurant is a free-standing facility that can be accessed from 96th Street or through the lobby of the theater. Rosenello also is the mayor of North Wildwood.

Renovations at Harbor Square over the past few months led to the discovery of some of its more unique elements. Two of the theaters include balconies that were discovered when plaster and drywall were torn down.

“We’ve made great strides. It’s an exciting project because we discovered a lot of architectural things from when it was built in the ’40s that we’re trying to bring out,” Bunting said. “I call it art deco meets high-end beach coastal.” 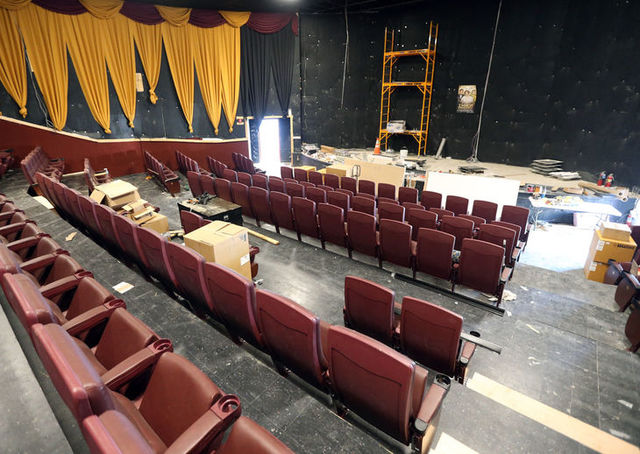