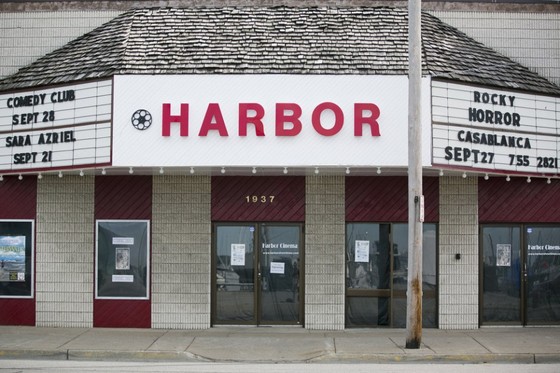 From MLive.com: Harbor Cinema is back open for business.

Less than two months after the charming movie theater in Muskegon’s Lakeside District announced it would be closing its doors, owner Dan Taylor-Tubergen has made the decision to reopen. He said it was a change in policy by one of the film industry’s leaders that provoked the change of heart.

“We decided to reopen because (21st Century) Fox has dropped the issue of clearances which is what was stopping us from showing their first run films along with the Carousel before,” Taylor-Tubergen said. “So now we will be able to show some first run movies.”

The Harbor Cinema, 1937 Lakeshore Drive, has had a long up-and-down history in Muskegon. It has operated under several owners and names over the years. The theater had been closed since May 8 with owners citing “unwelcomed theater competition in the community by another corporate theater chain.”

However, the theater will now reopen on July 22 with several screenings of the upcoming family film “Ice Age: Collision Course.”

The film will be the fifth in the “Ice Age” saga and features Manny, Diego, and Sid joining up with Buck to fend off a meteor strike that would destroy the world.