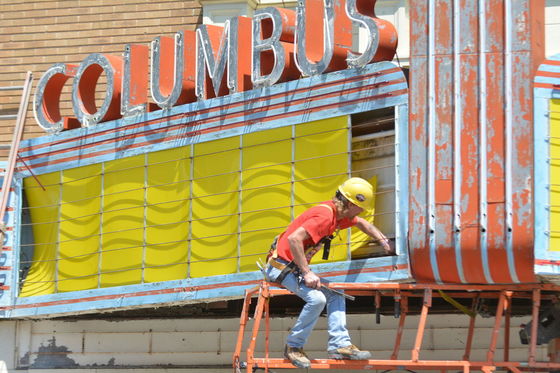 From The Columbus Telegram: Onlookers gathered along 13th Street Wednesday as they watched a part of downtown Columbus disappear.

The theater that closed in the early 1990s has been a cornerstone in the downtown district and residents’ memories. It was hard for some to watch as the triangular, yellow sign with blue and red lettering was taken down and loaded onto a trailer.

“It’s been there forever,” said Bryan Rockford as he watched the removal. “I remember going to the movies there. It’s just part of my life and my younger years. It saddens me to see it come down instead of restored.”

Rockford, who lives in an apartment above a downtown shop, said he’s been watching downtown slowly fade away. A move like this makes the transformation even worse, he said.

“I think this is the attraction downtown needs,” he said, lobbying for a restoration of the theater. “It needs it because I think downtown is drying up and this is just one more thing. The only thing missing is a tumbleweed blowing down the road.

Mayor Mike Moser, who owns Columbus Music a few doors down from the old theater, said he was sad to see the marquee go because he has childhood memories associated with the building. But he understood the reasoning since it was damaged.

“The renovation of the theater has been a popular topic for about 20 years,” Moser said. “There has been a lot of people who talk about it and dream about it. It was my understanding that (Mac) Hull was trying to get it together but it just never happened.”

Hull, who owns the theater building, could not be reached Wednesday to comment on his plans for the sign.

Barb Siedlik, coordinator of the Downtown Business Association, and her husband Mike Siedlik, owner of Siedlik Signs and a Platte County Historical Society board member, want to save the marquee.

“We’re hoping to keep it in the Columbus history,” Barb Siedlik said. “We’re hoping it will become a part of the Platte County Historical Society.” 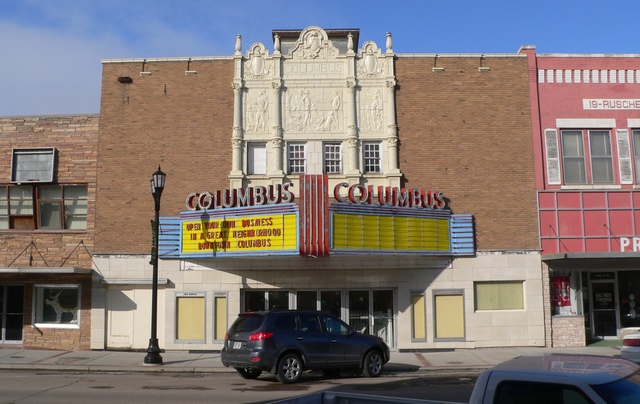 I have watched the movie once in this cinema and that was the really exciting time. I am quite surprised to hear this news that this cinema is going to disappear. Catch you later for bestassignmentservices.co.uk more updates.

Wow, this is really interesting reading. I am glad I found this and got to read it. Great job on this content. I like it.ASTM Level 3

I wish more authors of this type of content would take the time you did to research and write so well. I am very impressed with your vision and insight.[url=https://buff.playnhc.com]먹튀검증사이트[/url]

Intriguing post. I Have Been pondering about this issue, so much obliged for posting. Really cool post.It “s truly extremely pleasant and Useful post.Thanks먹튀검증

Extraordinary things you’ve generally imparted to us. Simply continue written work this sort of posts.The time which was squandered in going for educational cost now it can be utilized for studies.ThanksJio rockers

pleasant post, stay aware of this fascinating work. It truly regards realize that this subject is being secured likewise on this site so cheers for setting aside time to talk about this!shopify chatbot

I definitely enjoying every little bit of it. It is a great website and nice share. I want to thank you. Good job! You guys do a great blog, and have some great contents. Keep up the good workGB WhatsApp APK

Hello I am so delighted I located your blog, I really located you by mistake, while I was watching on google for something else, Anyways I am here now and could just like to say thank for a tremendous post and a all round entertaining website. Please do keep up the great work.หนังออนไลน์

I wanted to thank you for this excellent read!! I definitely loved every little bit of it. I have you bookmarked your site to check out the new stuff you post.ดูหนังฟรี

Intriguing post. I Have Been pondering about this issue, so much obliged for posting. Really cool post.It “s truly extremely pleasant and Useful post.Thanksvisit the site