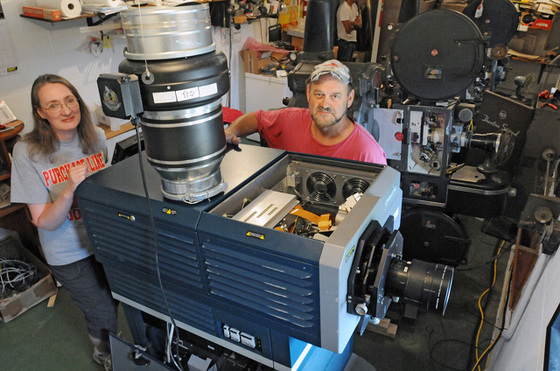 From the Indiana Gazette: Equipped with an added piece of expensive technology, the Palace Gardens Drive-in Theater finally opened for the summer Friday evening.

But the technological upgrade wasn’t made just for the sake of becoming more modern. To the contrary, theater owners Clarine Beatty and husband Mike Hudzick made a significant financial investment in Palace Gardens to help preserve much of the 66-year-old drive-in’s tradition and nostalgia.

Making its debut at dusk Friday at the drive-in along Indian Springs Road in White Township was a 2007 model Christie digital movie projector. The addition of a digital projector means Palace Gardens will be able to continue showing new-release movies. About three years ago, movie studios started phasing out 35 mm film prints and began a switch to an all-digital distribution system. Theater owners who choose not to change with the times and acquire a digital projector will eventually be forced to screen only old movies that exist on celluloid.

The change to an all-digital distribution format left the future of Palace Gardens uncertain for the past few years. Beatty said the cost of a new digital projector approaches six figures — a hefty outlay for a business that only operates on weekends during the summer.

Because of the unavailability of movies on 35 mm film, Palace Gardens did not open this Memorial Day weekend as it has for decades. Beatty announced then that the drive-in might open later in the summer if she and Hudzick could “find a digital projection option that works for us.”

“This has been quite an endeavor,” Beatty said this week while preparing for opening night. She started early in 2016 — making a lot of phone calls, contacting other drive-in theater owners and her other movie business contacts — trying to locate a suitable projector.

“We’re a two-person business. … This is not the only thing we do,” Beatty said. She is a schoolteacher and Hudzick’s day job is as a contractor.

The search was complicated by the fact that Beatty and Hudzick not only needed a used projector, but a big one that could cast an image large enough to fill all of Palace Garden’s 92-foot-wide screen, one of the larger screens in the drive-in industry.

Just before Memorial Day Beatty located the Canadian-built Christie projector that had been used in a theater in England.

But buying a projector was only part of the equation. Palace Garden’s 1950s electrical system in the projection room also had to be beefed up, and air conditioning had to be installed to provide a controlled climate for the digital projector, which operates with a 6,000-watt bulb.

As recently as last week, one final component of the projection system had not arrived in Indiana, even though rumors were spreading on social media and by word of mouth that the drive-in was about to open.

Hudzick and a technician worked 40 hours in three days installing and connecting equipment and interfacing the new projector with the drive-in’s original carbon arc projection system from 1950. One of their work sessions ended about 3 a.m. after an on-screen projection test to make electronic adjustments.

The digital projector will deliver a bright, clear image and better audio quality. Patrons can still listen to the movies over the pole-mounted speakers at each parking space, or on their vehicle’s radio. The films’ audio will now be broadcast over an FM stereo system with more dynamic range than the previous AM radio signal.

Hudzick said Palace Gardens’ two old carbon arc projectors can still be used if and when the owners want to show older movies or other features on 35 mm film.

Interestingly, the digital projector will not be a time-saver for Beatty and Hudzick. Movies will now arrive at the theater on a hard-drive about the size of an 8-track tape (a piece of entertainment technology from the 1960s and ’70s when there were many more drive-ins in America). Hudzick said the amount of time needed to download the movie from the hard-drive into the digital projector — including steps to deal with encryption devices to prevent the movie from being pirated — will be longer than the running time of the film.

Beatty said she and Hudzick put a lot of thought into their decision to invest in a digital projector, especially because the summers of 2013 and 2014 were not good years to be operating a drive-in because of the frequent rainy weekends and what Beatty said was a slim selection of family-oriented movies.

“We really appreciate the interest and support of the community,” Beatty said. “We’ve put a lot of effort into preserving the history of this drive-in.”

Palace Gardens, she said, is not only a part of her family’s history — it was opened by her grandparents in 1950 — but also a part of Indiana’s history and the movie industry’s history.

Palace Gardens, Beatty said, is one of a very few drive-ins still operating with carbon arc projectors that have not been modified in some way. “We were very much the operating dinosaur. … We wanted to maintain the integrity of that system” and be able to use the original projectors in addition to the digital projector.

Even with the upgraded technology, the drive-in experience at Palace Gardens will remain the same. Admission prices are the same. The playground is still there for kids to enjoy before it’s dark enough to start the movie. The familiar speakers are still on the poles. Even much of the food-preparation equipment in the concession stand is from the 1950s.

Beatty said some moviegoers who have been away for years tell her the drive-in “looks just like it was when I was a kid.”

“That’s because it is like it was when you were a kid,” she tells them.

Many of the patrons who watched the first movies at Palace Gardens later brought their children and now come with their grandchildren.

“We decided it was something worth preserving,” Hudzick said. “It’s a great place to bring your family,” adding that he and Beatty and their employees try to make each visit to the drive-in an entertaining, enjoyable and safe experience.

Hudzick said that during the first two months of this summer several people told him, “I’m sorry the drive-in’s not open. But thanks for all the years of entertainment you gave us.”

“Those are the comments that make you feel it was worth it,” he said.

Beatty admittedly was nervous this week about opening the season Friday with the new projector.

“Hopefully people will be patient with us,” she said. “We’re getting our feet under us” with the new equipment. “It’s an adventure getting everybody back.”

Movies at Palace Gardens begin at dusk on Friday, Saturday and Sunday evenings. This weekend’s twin features are “Finding Dory” and “The Jungle Book,” both rated PG.

According to the United Drive-In Theatre Owners Association, as of June there were 324 drive-in theater locations in America with a total of 595 screens, and 299 of the locations have digital projectors.

As of September 2015, Pennsylvania had 28 drive-in theaters with a total of 48 screens, according to the UDITOA.

Link to the story: https://www.indianagazette.com/news/indiana-news/palace-gardens-drivein-reopens-with-digital-projector,24632045/ 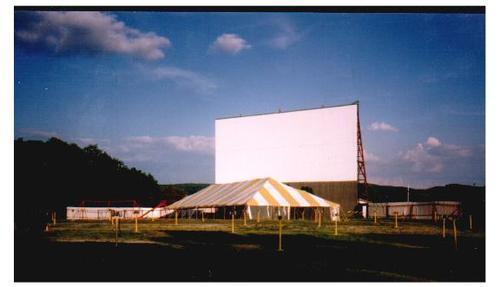 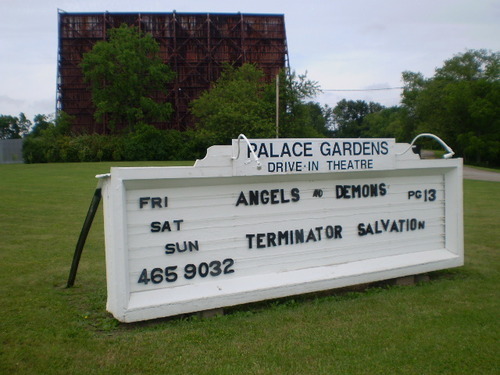