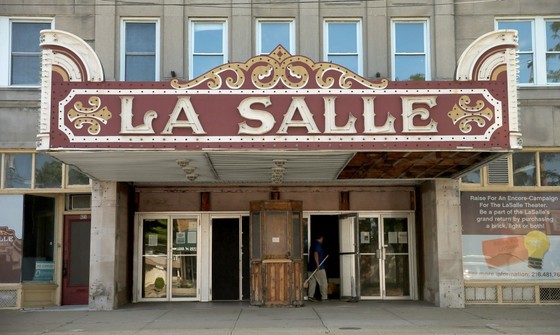 From Cleveland.com: Depending on how you count it, the historic La Salle Theatre on East 185th Street in Collinwood is embarking on its second, third or fourth life.

Built in 1927 as movie palace, it languished in the 1990s before becoming a vintage auto showroom and then going vacant for about a decade until now.

The nonprofit Northeast Shores Development Corp., which helped rescue the building from foreclosure and possible demolition in 2009, is scheduled to launch a $4.1 million renovation Tuesday that will turn the structure into an arts, media, and community center by next May.

The theater, which could seat 800 for performances or 450 for weddings, dinners and other catered events, will be used as a performing arts rehearsal or recording space, an exhibit hall, a stage for high school theater and arts programs, and as a meeting space for businesses and community organizations.

The project will also include renovation of three storefronts that flank the theater lobby on the ground level, and five apartments on the second story.

“This has been a monumental community lift getting this project off the ground,‘’ said Brian Friedman, director of Northeast Shores, who toured the building Thursday with Ward 8 City Councilman Michael Polensek.

“It’s been an incredibly bumpy journey,” Friedman added, “but we’re so excited to come up with creative solutions so the LaSalle can anchor the East 185th Street corridor again.”

The renovation will include a high-speed Internet hookup that should make the building attractive to musicians who could perform on-site and upload recordings to sound mixing studios elsewhere in the city or the United States, Friedman said.

Polensek described the renovation as critical to Collinwood’s future.

“This is the last neighborhood theater on the northeast side of the city,” he said. “This is it. It’s the last symbol of the heyday of vaudeville and motion pictures in Cleveland.”

Residents have been waiting for years to see the theater revived.

In fact, as Friedman walked out of the building on Thursday, a young woman in a white, southbound sedan stopped on East 185th Street and rolled down her window to shout, “I’ve been waiting” for the renovation.

Referring to the signs posted on the building advertising that work was beginning, she said, “I look at this every day. I’m into theater!”

Friedman smiled and joked that the woman, whom he did not recognize, had not been asked by his office to drive by at that precise moment.

Located at 823 East 185th St., the theater is the most prominent structure on the 1.2-mile stretch of the road from I-90 north to Lakeshore Boulevard, just south of Lake Erie.

It was designed by the Italian-born architect Nicola Petti (1880-1929), who also designed the Variety, Kinsman, Imperial, Moreland and Cedar Lee theaters in Greater Cleveland, plus theaters in Canton, Toledo and Mansfield, according to the Cleveland Landmark Commission’s website.

Named for a 17th-century French explorer of the Great Lakes region, the building features a two-story limestone facade with a central pavilion resembling a neoclassical temple with a triangular pediment on top, like a miniature Parthenon.

The ornate La Salle marquee, which features the theater’s name in fancy script, will be restored, with digital displays added to its sides in place of the old-timey, movable black letter signs that used to announce films that were playing.

Inside the theater’s spacious interior, curving walls are sprinkled ornate plaster ornamentation, some of which is in poor condition.

However, it’s still possible to see small sculptural medallions with bas relief profiles of La Salle and of the 18th-century German playwright Friedrich Schiller, whose “Ode to Joy” was made famous by Beethoven’s Ninth Symphony chorale.

Friedman said the renovation, designed by LDA Architects of Cleveland, would remove the theater’s sloping concrete floor, which once held 1,500 raked seats.

The designers will install a new floor with three horizontal terraces connected by stairs and by a wheelchair ramp to provide level spaces for tables and chairs.

Plasterwork will be restored, especially in the building’s lobby, where damage from age and leaks is visible.

Funding for the project includes $645,000 provided through various city programs; $1.7 million in grants, equity and contributions; and $1.7 million in historic tax credits and a mortgage.

Friedman said the budget does not include the kind of highly detailed decorative painting recently completed in upgrades of the Ohio and State theaters at Playhouse Square. 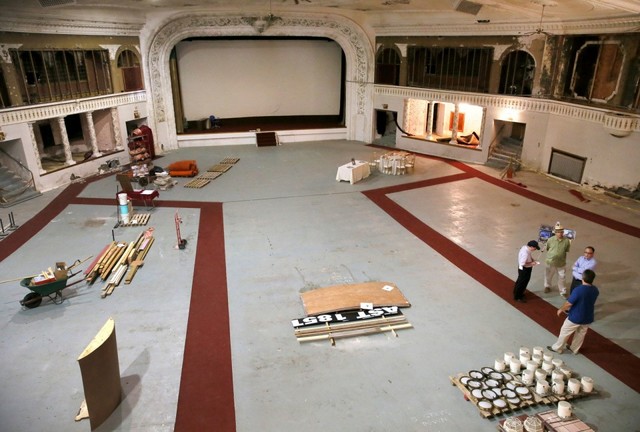 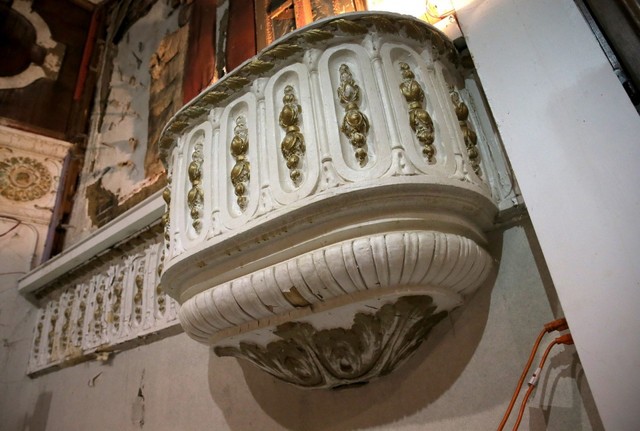