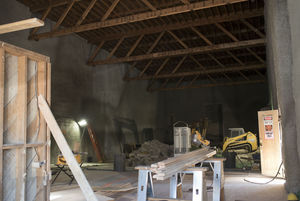 From the Jackson Hole News and Guide: The oldest theater building in the town of Jackson is now an empty shell as an ambitious renovation project brings the old structure up to current fire codes.

But what will happen next in the old Teton Theatre is a mystery to all but those involved in the deal. Robert Gill of the Gill Family Trust, which owns the building, won’t spill the beans.

“I don’t have any information for you as far as what it’s going to look like,” Gill said Tuesday.

Unveiling a new use and design is up to the future tenant, he said. His job is to get the building ready for use.

Passers-by on North Cache have noted a flurry of demolition work inside the building, phase one of the building’s restoration.

Town records hold permits and reports with notes about some details, but no plans are on file for reconstruction of the basement, first and improved second floor.

Right now there isn’t much floor per se — just dirt, rocks and a pile of debris visible when exterior plywood is removed. Construction crews go about their work inside as pedestrians mill past outside.

Gill said the walls were torn down to the bare rock, which was shot-coated with a layer of concrete to make a solid building even stronger. When the roof trusses were exposed they were also found to be solid. Gill said the town had suspected the trusses were some form of “cowboy” engineering — but they were in fact legitimately manufactured trusses.

The theater opened in 1941. It was built by Bruce Porter, who also constructed and ran Jackson Drug just up the street. Porter had started showing movies in the space above his store in 1922.

The building was an early landmark, with its stone exterior and location just off Town Square. The premiere of the classic and locally shot movie “Spencer’s Mountain” was shown there, with an after-party at the Million Dollar Cowboy Bar.

In the 1980s the theater got a renovation that included a snack bar and new seats. In the old days people would buy snacks at the corner drug store before going to the movie house.

Its marquee is still attached, but serves now as a political endorsement sign.

Speculation about its future has been rife — and fruitless.

A liquor license was transferred to the 120 N. Cache St. address in 2012, but no restaurant opened there.

A tobacco shop located for decades in the building lost its lease in June and relocated just blocks away to the north.

After four years work could finally begin on the building’s second life.

“A lot of the problem is it’s difficult to do things in town because of the cost,” Gill said.

While permits can be pricey, “That’s nothing compared to the housing fee.”

And while he said there are fond memories of the place as a single-screen movie theater, times have changed.

“It had really run its course a long time ago,” he said.

Gill seemed disappointed in his dealings with officials.

“I was hoping the town would be a little more helpful,” Gill said.

The project will have a few impacts, but mostly during off hours.

Roadway early birds may find some detours between Labor Day and Memorial Day as large structural members such as columns and beams are delivered.

A report by Josh Kilpatrick of Nelson Engineering, on file with the town, estimates it may take as many as 14 separate days to get that work done, “and will necessitate temporary three-hour closures of North Cache Street.”

The report states that a three-day advance notice will be given for 4 a.m. to 7 a.m. closures of the road between Deloney and Gill.

“New construction will commence after Labor Day and following the demolition phase,” the report read.

A window installation on the street side of the building will necessitate a covered walkway for pedestrian protection as rocks are removed from the facade.

Another traffic and parking disruption will take place as infrastructure for a new water and fire suppression system are installed beneath the pavement between Sept. 20 and Oct. 15.

Some parking spaces on the west side of the street will become a travel lane during part of that work. 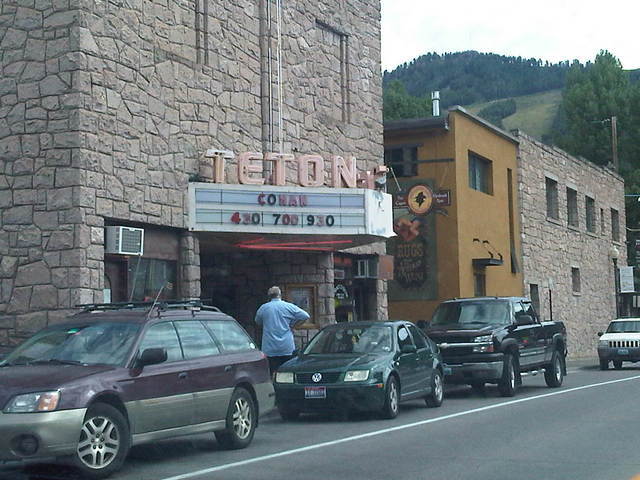