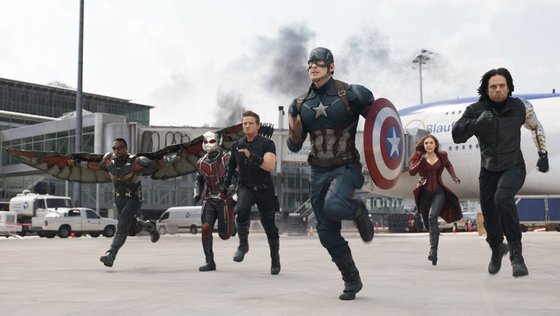 From The Hollywood Reporter: The sequelitis virus infected a number of big-budget franchise installments, except for a precious few (think ‘Captain America: Civil War’ and ‘Finding Dory’), while horror also helped save the day and Disney dominated.

Even though there’s still a week to go before the summer season ends on Labor Day, the verdict is in: Box-office revenue in North America should clock in at $4.5 billion, predicts comScore. That’s the second-best showing ever, behind only 2013’s $4.8 billion and up one percent over last year.

So why is Hollywood on red alert? Blame it on the sequelitis virus, which hit the U.S. particularly hard.

On the one hand, moviegoers in the U.S. and across the oceans turned out in force for Marvel Studio’s franchise installment Captain America: Civil War and Pixar’s sequel Finding Dory — they delivered Disney the summer’s two top-grossing films worldwide with $1.52 billion and $929.1 million, respectively. But the same moviegoers largely rejected a number of other big-budget sequels, reboots and remakes. One genre that’s been immune to the disease is horror, helping to deliver a number of solid doubles and triples that boosted the bottom line.

In terms of attendance, 518 million people went to the movies this summer in North America, according to early projections. That’s down roughly 3 percent from last year, but up from a dismal showing in 2014, when 497 million consumers bought tickets. However, the 518 million is behind summer 2013 (585 million) and summer 2012 (539 million).

Heading into summer, no studio executive could have imagined that STX Entertainment’s $20 million Bad Moms, an R-rated comedy that has grossed $95 million to date in North America, or Universal’s $5 million horror sequel The Purge: Anarchy ($79 million) would domestically out-gross the $170 million sequel Alice Through the Looking Glass starring Johnny Depp, which earned just $77 million in North America.

Alice 2 — which grossed a total of $153.6 million globally after costing Disney a pricey $140 million to make — is one of the summer’s biggest bombs in terms of the money it will lose. Add to that list MGM and Paramount’s Ben-Hur, Sony’s Ghostbusters, Paramount’s Teenage Mutant Nina Turtles: Out of the Shadows, as well as the video game adaptation Warcraft, from Legendary and Universal, and Steven Spielberg’s adaptation The BFG, released by Disney.

Wall Street analyst Doug Cruetz of the Cowen Group says Hollywood studios are in the business of building franchises or relying on well known IP, but cautions they may want to re-evaluate their programming choices when rummaging through the vault.

“I’ve talked to people at these companies, and they all seem to think the problem is they are putting out bad movies, as opposed to the consumers are demanding change. I think they are in denial about what’s going. I don’t know what they can do other than shut down a studio or two,” says Wall Street analyst Doug Cruetz.

“Just days after Secret Life of Pets opens, a sequel is announced. They greenlight these movies without a script and say we need this movie in two or three years. It’s bad for the creative process,” Cruetz continues. “I don’t know that they have any other good options. In the old days, studios would have bad times and go bankrupt. Now they are owned by big conglomerates. They can lose money as far as they eye can see, but they are not going to go away."

Still, it’s easy to understand why Illumination Entertainment and Universal eagerly announced a follow-up to Pets, since it is the No. 3 grossing title of the summer at the worldwide box office ($724.4 million).

The summer’s clear winner in terms of the six majors is Disney, whose summer films have amassed $2.56 billion globally, well ahead of its next nearest rivals, Warner Bros. and Universal, which are each at roughly $1.9 billion. The Disney domination is impressive, providing enough cushion to withstand the losses sustained from The BFG and Alice. But a bomb is a bomb.

“It’s tough out there,” says Walt Disney Studios chairman Alan Horn. “I don’t think the competition for people’s time and attention has ever been more intense, and, simultaneously, as an industry we have a lot of films looking for a slice of the pie over the course of the summer. So whether it’s a franchise film or a brand new concept, it is absolutely essential that we create compelling content that gets people to stop everything else they’re doing and go to the theater.”

Horn continues, “It’s no secret that we at Disney have embraced a tentpole strategy. In light of the competition I refer to above, it does feel as if tentpoles represent a relatively more compelling value. We have a unique structure at this company which enables us to generate more of these kinds of movies than other studios.”

Disney’s winning streak isn’t just about the summer. To date, the studio claims the top-four grossing films of the year. In addition to Civil War and Finding Dory, there’s Zootopia and The Jungle Book.

Universal enjoyed a record summer in 2015 and knew comparisons would be incredibly tough. The studio’s Jason Bourne, reuniting director Paul Greengrass and Matt Damon, who sat out the last Bourne movie, has grossed $347.9 million worldwide, but it’s not likely to match the $442 million grossed by Damon’s last Bourne appearance, The Bourne Ultimatum in 2007. However, the studio says it has successfully relaunched the franchise.

Paramount’s Star Trek Beyond is another franchise installment that’s trailing the last film in its series, Star Trek Into Darkness ($467.4 million, 2013). Star Trek Beyond has earned $243 million to date worldwide and will need to be sizeable player when it opens in China next month to land in the black.

“This summer there have simply been too many sequels, reboots, remakes and even re-quels that have failed to measure up to audience expectations. This has created a negative perception of what Hollywood has to offer, and despite solid overall revenues and what will likely be the second-biggest summer on record, a long-term trend like this could erode goodwill and consumer enthusiasm over time,” says box-office analyst Paul Dergarabedian.

But AMC Theatres CEO Adam Aron has a different take.

“Sometimes it’s easier to look in the rearview mirror than look forward,” Aron said. “I think a lot of people are still licking their wounds from April, May and June. We were down 9 percent to 10 percent in second quarter. That all changed in July, and Q3 is up 14 percent so far. The tide turned with Finding Dory, which was a huge hit, while Secret Life of Pets was the largest July opening ever for a non-sequel. And Suicide Squad was the largest August debut in history. And we’re up more than 4 percent year to date.”

Fox — currently in the midst of a regime change as Stacey Snider succeeds Jim Gianopulos as chairman-CEO of the film studio — has had a tough summer, but it’s global revenue ($1.36 billion) still puts it well ahead of Sony and Paramount. The studio was hit hard by the sequelitis virus. Ice Age: Collision, sporting a 13 percent rotten rating on Rotten Tomatoes, has earned just $368.3 million to date. The last film, Ice Age: Continental Drift grossed a dazzling $877 million in 2012. And Independence Day: Resurgence ($382.3 million) is a major disappointment.

Sony, which placed last in summer 2016, has improved its standing with $868 million to date in summer worldwide revenue, led by Rovio’s Angry Birds ($246.6 million). While the studio weathered plenty of bad publicity over Ghostbusters, it’s found success with a trio of modestly budgeted films. In an ironic twist, Sony’s The Shallows, a $17 million Blake Lively shark movie paying homage to Steven Spielberg’s Jaws ended up narrowly beating Spielberg’s The BFG domestically ($54.6 million versus $54.3 million), while the R-rated animated Sausage Party, costing under $20 million to make, has amassed $80 million in its first 10 days domestically. And over the Aug. 26-28 weekend, the $10 million horror film Don’t Breathe, from Sony’s Screen Gems and Stage 6 films, opened to a healthy $26.1 million.

Warners' summer, which saw definite improvement over summer 2015, has been the master of horror and comedy.

Attention was focused on its tentpoles. Suicide Squad has grossed $636 million to date worldwide, making it the No. 5 title of the summer, and The Legend of Tarzan did better than expected ($352.7 million).

But the studio got solid boosts from New Line’s horror sequel The Conjuring 2, which grossed a stellar $319.5 million globally on a $40 million budget — on par with The Conjuring — while Lights Out, costing less than $5 million to produce, has earned north of $125 million to date. (A Lights Out sequel has already been announced.) New Line also partnered with Universal on Dwayne Johnson and Kevin Hart’s Central Intelligence, the top-grossing comedy of summer with $212.2 million worldwide.

The other comedy that made noise was STX Entertainment’s Bad Moms, still in release. The R-rated film has earned a better than expected $124.2 million to date, including $95.4 million domestically, compared to a $127.2 million domestic take for Central Intelligence. Paramount, having fielded Star Trek, Turtles and Ben-Hur, is in last place in terms of its global summer box-office revenue, which stands at roughly $547 million to date. And Paramount vice chairman Rob Moore readily admits its been a rough summer.

“The challenge is we live in a marketplace where you are always looking to do something that something people. know. The challenge is to identify where the audiences are,” Moore says. “Consumers have become much tougher on sequels and remakes.”

While noting that Warners used genre films and comedy to improve its results, Cruetz notes that genre films and comedies don’t necessarily move the needle at the big studios, hence the obsession with known IP and franchises. But he questions this summer’s programming choices.

“We’ve never had such a big concentration of big franchise titles,” he says. “The problem is, the people gong to see movies are all going to the same movies, like Finding Dory. The same thing happened with video games. But if I want to see Ben-Hur, I’m going to pop in the old movie.”

Or as STX film chief and former Universal Pictures chairman Adam Fogelson puts it: “I think the opportunity for ‘good’ movies to do fantastic business at the box office whether they are sequels, franchises, tentpoles or original films is still absolutely there to be enjoyed. The downside is, if the audience decides a movie is not worth their time, they are simply not going to come. And the financial exposure of risk has gotten significantly greater.”