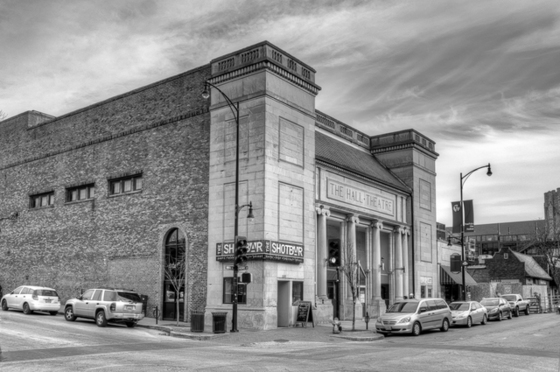 From The Missourian:
In 1916, finding entertainment in Columbia was difficult. With only a few small theaters and the advent of modern entertainment still decades away, Columbia offered little in the way of diversion.

On Aug. 28, all of that changed. The Hall Theatre, a large, ornate playhouse on Ninth Street, opened, and for 35 cents, everyone in Columbia could see a motion picture, catch a vaudeville act and listen to one of the state’s best orchestras.

Not only did the Hall Theatre bring a new place for entertainment to Columbia, it invigorated the downtown culture by bringing fresh talent to town.

One hundred years later, the Hall Theatre remains standing, but only as a relic of its former self. Empty and unused since 2013, the theater hasn’t presented a show in 45 years.

“It’s really sad for the downtown to be celebrating the Hall’s 100th birthday while it’s still empty and not in the best shape,” said Rick Robertson, co-owner of Booche’s, the theater’s next-door neighbor for nearly 90 years.

Many have tried and failed to re-establish the theater as a fixture in downtown Columbia over the past 40 years. It spent nearly two decades as a restaurant and is now owned by TKG Hall Theatre, LLC, a Stan Kroenke company, which is trying to lease the space.

Renovating the rundown building for any purpose today would be an expensive undertaking. But Don Mueller, a local history buff who has spent the past two years studying the theater, would love to see it return to its original purpose.

“It would have to take a lot of people,” he said, “but there is a way for that building to reach its glory again.”

The Hall Theatre was built and named after Tom C. Hall, an ambitious businessman from Moberly who owned the Star Theater, a smaller playhouse in downtown Columbia. Hall saw the opportunity to bring a bigger, better theater to the people of Columbia and began constructing the Hall in December 1915.

The materials used to build the theater — including the lumber, lighting, roofing and furniture — were provided almost exclusively by local small businesses, according to news reports at the time. The heating and cooling system was revolutionary for its era, a series of small “mushrooms” that pushed air up beneath the theater’s seats.

On the night of its grand opening on Aug. 28, 1916, the theater was still incomplete. While the stage and seats were installed, the walls remained unpainted as dye factories in Europe shut down during World War I.

But, the grand opening of the new playhouse, with a five-part mystery war drama and four vaudeville acts, ushered in the Hall Theatre’s 55-year run as a successful multi-use theater. For years, it offered a variety of productions, from large-scale vaudeville performances to smaller black-and-white silent films.

It showed Douglas Fairbanks in “The Matrimaniac,” Theda Bara in “The Darling of Paris” and Myrtle Gonzalez in “Southern Justice,” among hundreds of other Hollywood films.

“At that time, theater was basically the major form of entertainment that people had,” Mueller said. “People would come into town on Saturdays to do their shopping and then spend the rest of the day at the movies.”

The theater was such a success that it inspired the construction of an additional two downtown theaters, the Missouri Theatre and the Varsity, now the Blue Note, within a matter of years.

In the late 1920s, when the popularity of vaudeville began to decline, the Hall focused entirely on movies. The theater was renovated twice, once in 1953 and once in 1967, to accommodate the technical advances in film. Cinemascope, stereophonic sound and a moveable screen were added to the theater, along with a maroon marquee on the building facade.

But the introduction of smaller, “shoebox” movie theaters proved to be insurmountable competition for the Hall. It cost significantly less to screen movies in shoebox theaters than it did in a now-outdated movie palace. In 1971, the Hall Theatre showed its last movie and closed indefinitely.

For at least two decades after closing, the theater endured a series of failed attempts to repurpose its unused space.

Commonwealth Theatres, the Kansas City-based theater chain that acquired the lease to the Hall in 1955, failed to maintain the interior after it closed. As the theater slowly began to deteriorate, the cost of renovation steadily climbed.

According to a Columbia Missourian story from the early 1980s, a number of potential buyers simply couldn’t afford to renovate the building, including Dennis Powell, a Columbia Daily Tribune critic who wanted to turn the Hall into a civic center; Eric Sherman, a promoter from Kansas City who wanted the theater to become a concert hall; and Mark Landrum, a city official who tried to develop it as convention space.

The one individual who came close to restoring the Hall was Garry Lewis, a young lawyer and MU graduate who bought the theater in 1987 in hopes of making it a dinner theater.

“There were no other dinner theaters in the area,” Lewis said. “I’d been to a few in Kansas City and thought that they were great, so I wanted to bring that to Columbia.”

Despite his love for the Hall, Lewis had no experience managing a theater or a restaurant. After a year of renovations, he searched in vain for someone to lease and run his new dinner theater.

“I really tried to find someone,” he said. “But it just didn’t want to happen.”

Eventually, Lewis sold the theater in 1990 to Max Gilland, a local businessman who intended to turn it into a mini-mall. His plan also failed and the building was sold to St. Louis Bread Co., later called Panera Bread, in 1993. The bakery-café opened in March 1994 and closed its doors in December 2013 to concentrate on its other locations in town.

Future of the Hall

Today, TKG Hall Theatre, LLC has been actively seeking a business to take over the theater. Gina Rende, a real estate agent with MALY Commercial Realty, said that the ownership is currently beginning small renovations, but has yet to finalize a full renovation budget. Rende also said there have been a number of leasing offers, but none have been finalized.

Mueller, the theater’s unofficial historian, said he would like to see the Hall restored as a multi-purpose community theater. Lewis, the former owner, said that he thinks the state should purchase the theater for MU to use as a performance space.

Robertson, the owner of Booche’s, said he would be happy to see a restaurant, a retail store or even a professional office move into the empty theater.

“I think it would be a miracle if they turned that place into a theater again,” he said. “I just don’t think it’s that realistic.”

While they had varying solutions for the Hall Theatre, all agreed on one thing: Don’t tear down the century-old building to make room for another luxury apartment complex.

“If the same standards were applied to building downtown apartments as they are anywhere else, we could save buildings like the Hall,” Lewis said.

“I think it would be a miracle if they turned that place into a theater again,” he said. “I just don’t think it’s that realistic.”

While they had varying solutions for the Hall Theatre, all agreed on one thing: Don’t tear down the century-old building to make room for another luxury apartment complex.

Full story, with photo gallery and video, at: http://www.columbiamissourian.com/news/local/after-years-of-rich-history-hall-theatre-s-future-waits/article_41600b20-6b0d-11e6-bebc-ff70d5d24dc4.html 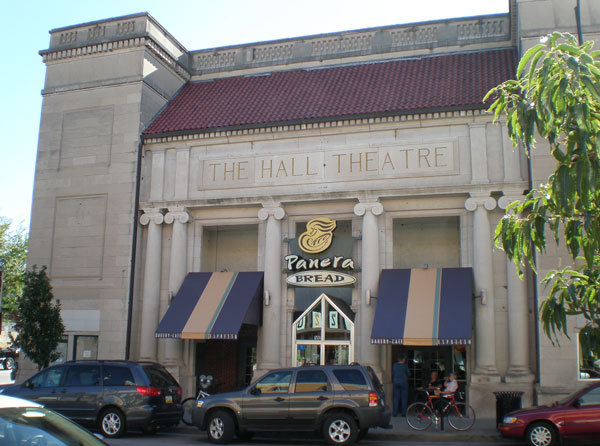 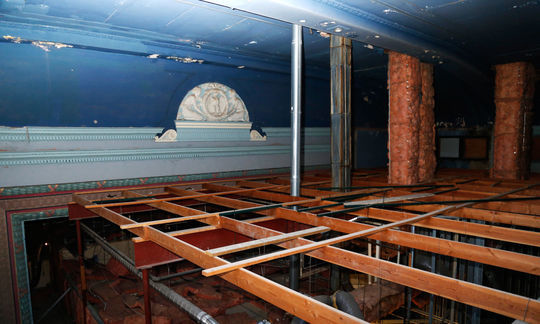