Los Angeles, CA - Broadway’s Globe Theatre will get a facelift and housing 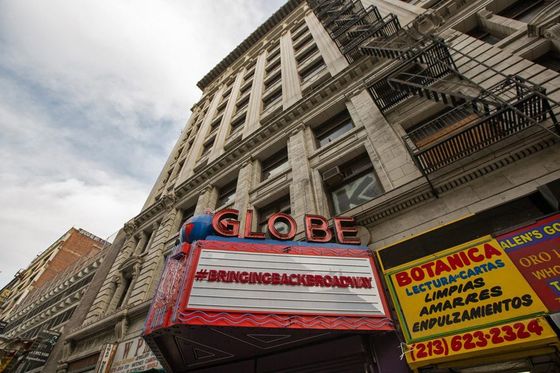 From Curbed Los Angeles: Just about a year ago, Broadway’s Globe Theatre reopened after a $5 million renovation that began in 2011. Now, the 1913 Beaux-Arts building that houses the theatre will get a makeover of its own. Developer 740 South Broadway Associates, LLC submitted plans to the city Wednesday calling for facade improvements and a zoning change for the structure that would allow its conversion to residential use.

Yes, the historic theatre, which now operates primarily as a night club and swanky event space, will be getting some new upstairs neighbors. Kate Bartolo, who is consulting with the developer on the project, tells Curbed that the building’s 10 upper floors—unoccupied since the 1980s—will be converted into 47 units of live-work housing. The project will also include the addition of two small street-level bars, a rooftop deck, and an amenities lounge within a small penthouse unit that has evidently been a popular spot for taggers over the years. The building’s lobby, long occupied by retailers, will be fixed up and converted back to its original use.

The developer is working with a restoration company and historic preservation consultant to refurbish the building’s facade. This includes the restoration of prism glass transom windows above the ground level, the removal of non-historic storefronts and sliding metal grates along Broadway, and the repair of brick and terra cotta features on the building’s upper levels.

Bartolo hints that the Morgan, Walls & Morgan-designed structure could also get its own rooftop sign somewhere down the road—in keeping with so many other historic buildings in the Downtown area. That sign would probably read “Garland,” which is the building’s official name. According to Downtown News, that’s after William Garland, the original developer of the property.