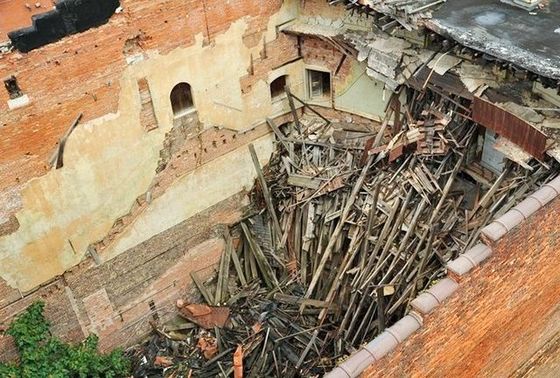 From The Baltimore Sun: fter decades of inaction, Baltimore’s Mayfair Theatre faces imminent demise. According to engineering reports commissioned by the Baltimore Housing Authority, all but the first 35 feet of the 1903 landmark — the façade and lobby — must fall to the wrecker’s ball because of public safety concerns. However, I cannot help but be skeptical. A blank slate may make it easier for redevelopment, but at what cost to the city? The Mayfair’s cultural and historical significance will be swept away in the rubble, along with the potential for an iconic addition to the city’s Bromo Arts District.

The Mayfair is essentially three structures: the lobby, the auditorium and the fly tower. The Baltimore Development Corporation says that the roof over the lobby is the only portion of cover that’s intact, but upon inspection, the fly tower roof also appears whole, suggesting that this section of the structure may be stable and therefore salvageable. What were the engineers' findings on the west side fly tower? And what would be required to stabilize the north and south walls of the structure in lieu of demolishing them? The engineering reports and related correspondence should be shared with the public. Otherwise, it is difficult to be certain whether public safety or developer convenience is the deciding factor.

Left intact, the Mayfair Theatre bears witness to Baltimore’s cultural shifts and creative adaptation through much of the 20th century. The site began life as a public bath house (vestiges still remain in the basement). As pastimes changed, the Mayfair evolved — as an ice skating rink, then a playhouse, a Vaudeville venue and finally a movie theater before closing its doors in 1980.

The entire vicinity was once a vibrant center for arts and culture. The Stanley Theatre used to sit just north of the Mayfair; now a parking lot, the Stanley had been the largest theater in Baltimore. The Hotel Kernan around the corner (now the Congress Hotel) also began life as a Turkish bath house, and over the years featured a German beer hall and vaudeville theater presenting acts like Charlie Chaplin and Will Rogers. Into the 1980s, the basement’s Marble Bar hosted punk and new wave bands like REM and Iggy Pop, in addition to many talented local musicians.

In 1993, Mayor Kurt Schmoke laid out a compelling vision for the Howard Street corridor as a magnet for artists and arts events. He understood the importance of building on the heritage and history of the area. In 2012, this vision was reinforced with the creation of the Bromo Arts District, which extends along Howard Street from Lombard to Read.

Despite this broader vision, the BDC’s West Side Strategic Plan sought to “redevelop the Congress Hotel and the Mayfair Theatre to create desirable residential development.” But the last thing an old theater’s architecture lends itself to is apartments. RFP after RFP for mixed use residential retail developments were issued for the Mayfair. These were bound to fail, and they did time and again. In the meantime, neither the city nor BDC ever took action to stabilize this historic treasure. Instead, they awaited some potential developer to fix the roof. So this beautiful treasure sat exposed to the elements for nearly 20 years — demolition by neglect.

Now we’re told that while the façade might be salvaged, the auditorium and fly tower must be demolished to make way for all-new construction.

Kimberly Clark, BDC’s executive vice president, told The Sun that BDC had “hoped” to preserve the entire theater. Doing nothing (or worse) over the last two decades instead doomed it: when the roof was left open after the 1998 collapse, when the removal of the marquee led to a destructive fire, when the walls were not stabilized before demolition of the Franklin-Delphey Hotel. What would it have cost to stabilize the Mayfair at any point along this timeline? More importantly, what would it cost to stabilize it now? Imagine a steel frame shoring up the interior to make way for an open air music venue, and a music incubator and event space in the fly tower; the potential is there.

Demolition is not cheap. The amount of material that will need to be removed is substantial. Large timber trusses over 100 years old sit on the floor of the theater; are they headed for the landfill? A creative development team could re-use that lumber within the Mayfair if it were ever rehabilitated;

While some might applaud the “rescue” of the Mayfair’s façade, we should all mourn the loss of this beautiful historic and cultural icon. Better yet, we should fight to save it. 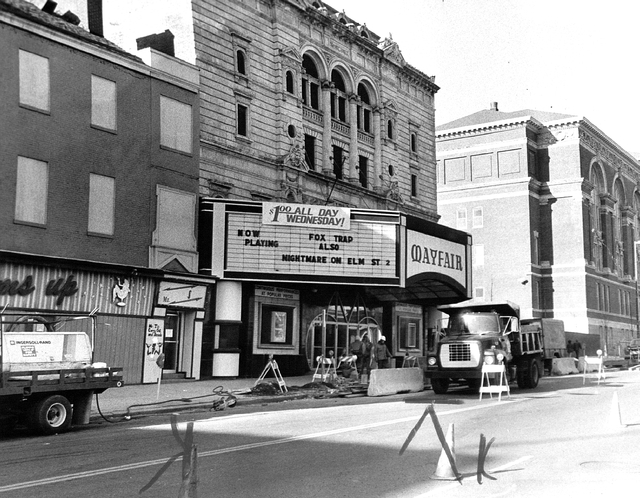 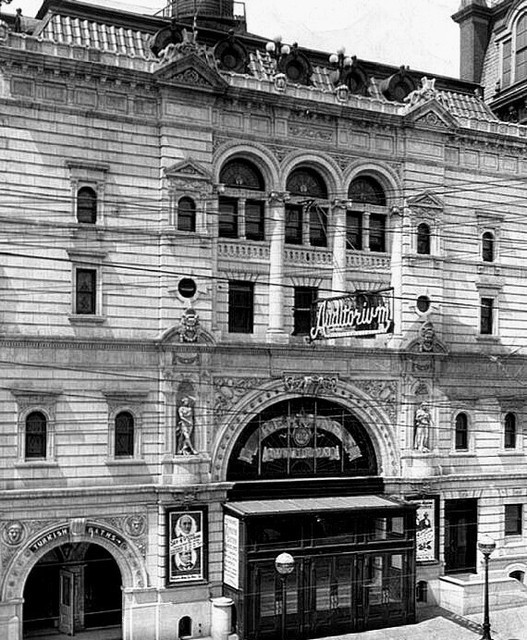