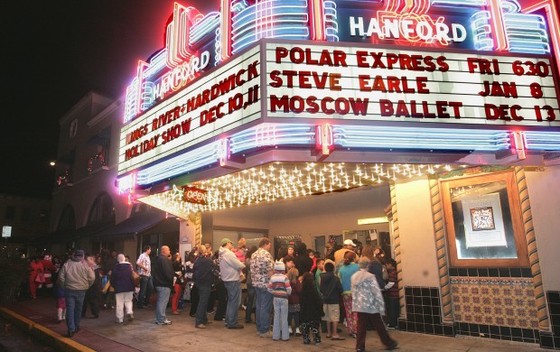 From The Fresno Bee: The Hanford Fox Theatre, one of the jewels of the central San Joaquin Valley, is shining brighter than ever following a two-year restoration that cost nearly $4 million.

The rehab took place under the watchful eye of Dan Humason, a believer in historic preservation and owner of the building that he says “owns me.”

The Fox opened as a movie palace and vaudeville stage in 1929 and grew into a Hanford institution where big-name entertainers perform and local organizations hold private events.

Next door to the Fox is Lush wine bar owned by Lindsey Oliveira, who grew up in Hanford and fondly remembers watching movies and shows there.

Her business has benefited from Hanford Fox foot traffic, she said.

“The shows at the Fox Theater not only attract patrons from Hanford, but from surrounding areas, even towns hours away,” she said.

City manager Darrel Pyle said the Fox is an iconic symbol of the city’s downtown.

“The city of Hanford is grateful for an indefatigable Danny Humason,” he said. “His tireless pursuit of a complete and lasting restoration is what brought this to completion.”

To lose the Fox would have been “a real tragedy” Pyle said.

The saga of the restoration began the morning of March 20, 2014, when Humason walked into the theater and thought a bomb had gone off. Every chair in the 1,055-seat theater was covered in white powder and debris.

The ceiling had collapsed.

It soon became clear the old theater might never reopen due to the expense of repair and required upgrades, such as redesigning a bathroom to meet Americans with Disabilities Act requirements and improving wheelchair-accessible seating.

But Humason likes a project.

The Hanford Fox is an important part of Valley history, he said.

“This is Americana,” he said. “It’s a building enjoyed by every facet of America. It was like a library, where people learned knowledge. The poorest man in town and the richest man in town were there together.”

Young people are often surprised when they see a live show at the Fox, he said.

“It’s neat when a younger person comes in and says why, why was it like this?” he said. “Then they see a show and they get it. You’re with other people who feel the same way you do about a performing art. It’s like church in a way.”

Luckily for fans of vintage theaters, the Humason family had always paid their insurance premiums. After verifying that the ceiling collapse was due to old age and not negligence, the insurance company paid for the repair.

People complain about insurance companies but “Nationwide Allied Insurance did us right,” Humason said. Bellfor Property Restoration in Fresno, under the direction of Jerry Randrup, did the work, he said.

Anyone who has seen a movie or attended a concert at the Hanford Fox remembers the stars in the ceiling.

“I know that everyone wanted the stars back,” Humason said.

“I’m a preservationist but I appreciate modern technology,” Humason said. “We’re not stodgy on preservation.”

In a nod to modern tastes, about 1,400 small, three-watt lights were also added to the ceiling and are controlled by computer software to make vibrating color patterns.

“We’re calling it the sparkle ceiling,” Humason said. His stage hands find standard lighting to be boring and really know how to get the new lights going, he said.

Like the Hanford theater, the Visalia Fox Theatre has charming stars on the ceiling.

Both are similar in design, said Humason, a member of the League of Historic American Theatres. For instance, both have exotic asymmetrical architectural features to the sides of the stages.

“They call these theaters ‘atmospheric theaters,’ ” said Humason, noting that designer John Eberson is credited for the style. “They typically have stars and clouds. They’re to make you feel as if you’re outside.”

Humason’s father, J. Daniel Humason, who died this year shortly before the restoration was complete, bought the Hanford Fox in 1979.

He was a real estate developer, but his son had worked at Warnors theater in downtown Fresno (“I was a roadie and loadie,” Humason said,) so the elder Humason asked his son to help run the Hanford theater, especially movies at first.

“I told him I would give two years,” he said.

Humason soon got a call from Johnny Cash’s manager, Lou Robin, to book a show.

“It went from there,” Humason said. He has booked countless shows since then and has dozens of signed photos of performers. He ate dinner with Merle Haggard several times.

The Fox is like a museum with vintage movie posters and old gear adding an aura to the place. An 87-year-old theater has many stories, Humason said.

Under many of the seats are return ducts for air conditioning, he said.

In the 1980s, the Humason family decided to give the Fox a good cleaning and removed the duct covers to look inside. There they found empty cigarette boxes, candy wrappers, Milk Duds boxes, and all kinds of things.

They took some of the old wrappers and old photos of movie stars and glued them to the top of tables in the balcony. Each one is different.

Also found in the duct work was a school ring. Humason put up a sign on the marquee: “Found – Hanford High class ring 1940.”

About two months later an older man showed up and asked if they still had the ring, that it might be his. Humason asked him where he was sitting when he lost it and the man pointed to the location, which was right where Humason’s friend, the late Jimmy Poole, had found it.

The man told Humason he had gone to the movie with his girlfriend and her friend. His girlfriend was wearing the ring on a cord around her neck and had gotten up to use the bathroom.

“When she returned, she caught him kissing the other girl,” Humason said. “She took off the ring and threw it at him.” That was the last time anyone saw it until Poole found it.

At some live shows, beer is for sale at a long room called Neon Alley, where Humason’s collection of neon signs hang.

The original stage curtain showing an elaborate Mission Revival scene is still there. Other curiosities include “the guillotine windows” in the the projection room. They’re made of metal and come down quickly in front of the glass windows in case of fire. At one time, movie film was highly flammable and could explode.

Operating the Fox is still in Humason’s blood. 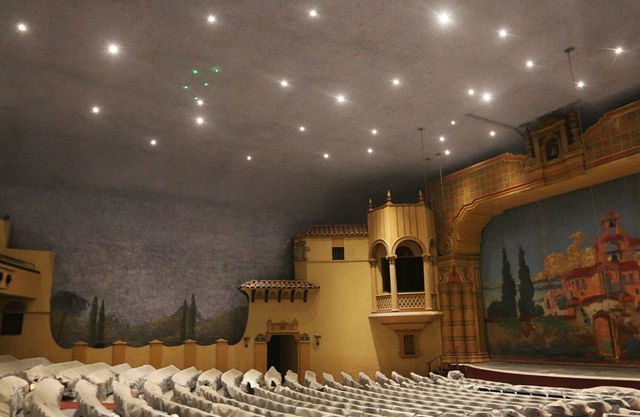 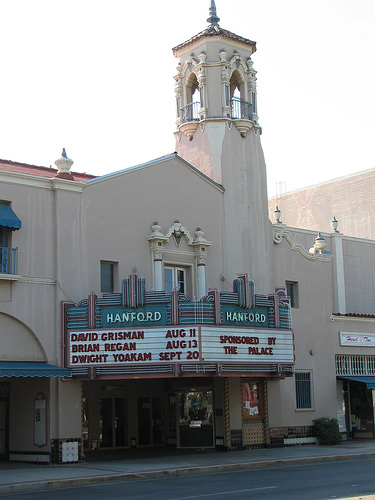