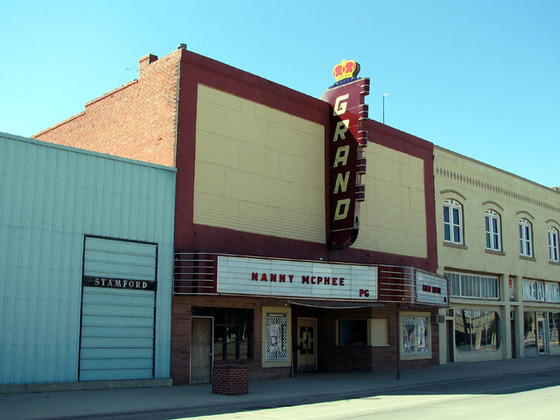 From the Abilene Reporter-News: All this action ultimately ruffled a few downy feathers.

“We found a little baby pigeon, I guess the momma ran off because of the situation here,” said Toni Welch, hefting a towel with a small dinosaur-looking creature nestled inside.

Rain was falling off and on Saturday morning on the square. It kept the dust down as a crew of volunteers used heavy equipment and shovels to gut the rotted wood behind the marquee of the Grand Theater.

“The theater has been closed for about five years,” said Jessica Decker. She runs a public relations firm called Oreana Communications, her father Gary is chairman of a committee that is restoring the 80 year-old movie house.

“A lot of people were really sad to see it close,” she said, adding that the theater, like many others in rural communities, faced a major expense in switching to a digital projection system if it wanted to continue.

The Grand saw an earlier renovation in the mid 1990s. In 2002 I did a photo column on the theater, it was owned by Pam and David Scott from Graham at that time.

“There were a lot of changes and updates that needed to be made, and they just couldn’t do that,” Jessica said. “So the Economic Development Corporation of Stamford acquired the building with the intention of hopefully selling or reopening it.”

Jessica’s father recalled going to the Grand when he was growing up.

“I went to it as a kid when we lived up north of here in Munday,” Gary said. “It’s such a historic part of downtown, we want to replace it just like it was.”

Other than the wood behind the marquee, the rest of the theater seems to be in pretty good shape. Jessica said the plan is to replace the carpeting, seats, and fix the neon. But aside from the accumulated dust, there’s a sense that the theater could show a movie tomorrow if only the popcorn machine worked.

David Mims, a retired school administrator, came to watch the men work after hearing something was finally happening with the Grand.

“Oh man the popcorn, we just loved the popcorn,” he recalled, his eyes bright with that memory. “I would have never imagined they would bring this back.”

Often when a business closes in a small town, that’s the end of it. The empty frame might sit there, a phantom-like reminder of a time when life sparked brighter within the community.

“I’ve seen a lot of these just close and nobody does anything,” Mims said. “I just figured this was gone; it was going to be abandoned and we would see it torn up like the old theater over at Lueders.”

He smiled and didn’t appear to mind the approaching rain. He talked of the significance that a simple movie theater holds for young people, and how sharing its communal experience with family and friends enriches one’s life. In this age of on-demand video, that experience is an endangered one.

“There are so many things that our young people are not aware of, because we haven’t taken the time to share those things,” he said. “It just amazes me that there are some people still willing to put some effort into keeping things.”

Back in 2002, the projection booth still had a few fire extinguishing grenades lying around in the back. They were purely sentimental, the agent within had likely long ago lost its ability to put out a blaze.

Until the 1950s, Cellulose Nitrate was used as the base for film. Highly combustible, it could ignite with the heat of a cigarette, according to the National Media Museum, or spontaneously catch fire at temperatures as low as 120 F.

The grenades were pear-shaped glass bottles, wrapped with two protective wires. If a fire broke out, the projectionist would throw the device at the base of the flame to immediately knock it down.

The high temperatures generated by movie projector light bulbs made operating them a dangerous job back in the day. But there were perks — behind the projector at the Grand a modern toilet resided within its own doorless nook. But of those grenades, there was no trace.

Jessica said it’s going to take about $75,000 to fully fund the project, and they are about a third to their goal. If all goes well, the Grand should reopen in March 2017. The only question after that is what’s the first movie they will show?

But if there is one thing that he is thankful for, it’s how the town feels about seeing its theater once more return to life.

“My dad used to have a fried-pie business,” Gary said. “He told me years ago when I first moved to Stamford, he said the coolest thing about Stamford has always been the people.”

He looked around the square, saw Mims across the street, and noticed passing drivers as they slowed down to eyeball what was happening.

“Things don’t work in a small town unless you’ve got a lot of support behind you, and we are blessed with lots of community support behind this project. Stamford is a good place with good people,” he said.

“It’s the people that make a town, not the buildings.” 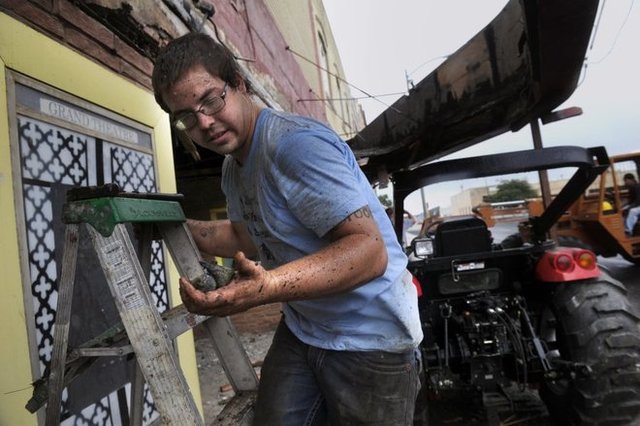 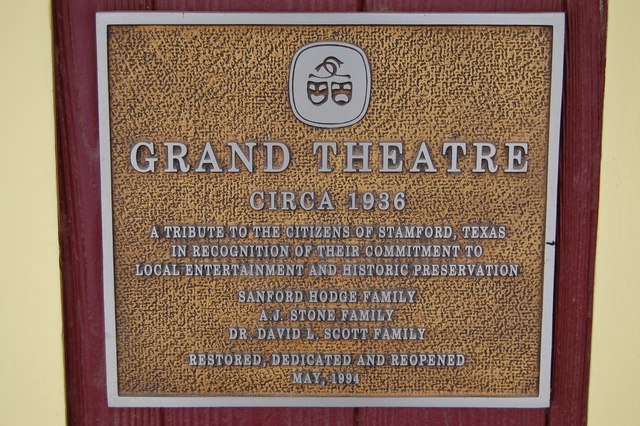