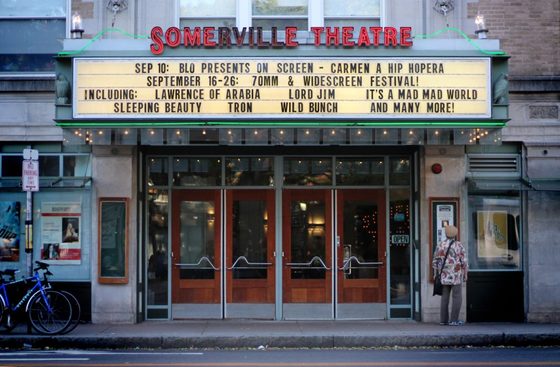 From WBUR.org: When you think of widescreen cinema there’s a good chance “Lawrence of Arabia” or “2001: A Space Odyssey” come to mind. They were shot to wow audiences with a picture so enormous it would literally turn heads. From left to right in a jam-packed movie palace, that is, not toward a tiny personal screen.

And unless you’ve seen them in 70 mm — the most robust of all motion picture film formats, popularized in the late ‘50s and '60s to lure people away from TV — you haven’t seen them at all. So says David Kornfeld, the head projectionist at the Somerville Theatre.

“The 70 mm frame is bigger than your iPhone!” Kornfeld points out, referring to the size of the image on a film print. “You should not miss these.”

Both classics will screen in 70 mm along with 14 other films as part of the Somerville’s 70 mm & Widescreen Festival. It’s a first for the theater, as well as the region, and the showings will take place from Friday, Sept. 16 through Sunday, Sept. 25.

Kornfeld is die-hard about film tech history, with a rabid fondness for 70 mm in particular.

“Film stocks, projectors, cameras, lenses, special effects, the history of sound … it goes on and on,” he says. “You will never touch bottom. You can spend a lifetime and still learn something.”

Putting together a festival that celebrates all that widescreen formats can offer has been a dream of his for at least a dozen years. But he didn’t do it alone.

“I’ve worked every theater in Boston. Most don’t exist anymore,” Kornfeld says of a projectionist career that started in 1978 and fizzled out as systems became automated, unions broke down and, in his opinion, quality control disappeared. He says Ian Judge, the Somerville’s director of operations and programmer, pulled him out of retirement in 2004 (about two years after Judge took the reins). They’ve been plotting ways to screen 70 mm ever since.

First they needed projectors. Judge says that Boston Light & Sound helped him track down a pair of Norelco DP-70s from the home of film restorationist Robert Harris about a decade ago. That was the easy part. Tweaking sound capability, including finding and installing processors, was far more complicated. As an example, there are 10 different sound formats for 70 mm alone.

Judge recalls that naysayers told him, “This is pointless, you’ll never find prints to run, it’s a dead format.” Last year, the Somerville ran several 70 mm screenings to troubleshoot glitches and now, Judge says, “We can run virtually every format ever made with rare exceptions.”

While shooting films on 70 mm became less common from the ‘80s onward, there are still many titles that were blown up to 70 mm for a better picture and six-track magnetic sound. “Silverado,” Lawrence Kasdan’s 1985 Western that is showing in this year’s festival, is case in point.

In December 2015, the Somerville was one of three local theaters to screen Quentin Tarantino’s resurrection of the nearly dead Ultra Panavision 70 mm format with “The Hateful Eight.” Judge credits Tarantino with getting “the idea of 70 mm back in the public’s mind” and says the exposure helped bring this festival to the fore.

“There’s definitely an audience,” says Judge. “Some just wanted to see new the Tarantino, others came just to see 70 and didn’t care what movie it was. The audience was from all walks of life: students, elderly, and everybody in between. Again, the power of format is that people consider it an attraction.”

Earlier this year Boston filmmaker Peter Flynn released a documentary, “The Dying of the Light,” about the history of film projection and projectionists. He gathered footage throughout the United States, but Kornfeld and other locals, such as Nick Lazzaro — head projectionist at the Coolidge Corner Theatre, play notable roles. Flynn explains that Boston is a special enclave for film exhibition because of its theaters, skilled staff members and astute audience. “I don’t think a night goes by in Boston where you can’t find film being presented in 35 mm,” says Flynn, which is rare. Even with that being so, he says, “This 70mm film festival really allows the Somerville to carve out a niche for itself.”

He explains that the Somerville, which turned 100 in 2014, “wasn’t twinned or broken up in the ‘70s.” Like many pre-Depression era theaters, it was designed for multiform entertainment, including live stage performances and the newfangled escapism of cinema. For Flynn, that adds a sense of authenticity to the widescreen experience. “You’re seeing it in a venue you’re meant to see it in,” he says.

Flynn also rallies on behalf of the line-up’s more obscure 70 mm prints. “ ‘Sleeping Beauty’ and ‘Tron’ are very difficult to get,” he says of the Disney titles. Flynn explains that striking new prints has become cost-prohibitive so studios are unwilling to let out inventory for fear of damage. Theaters now have to prove they can handle prints correctly, he says, which places knowledgeable projectionists in greater demand.

Today’s projectionists, Flynn says, “are the ones dedicated and so good, they’re the ones left standing. Hopefully, they will pave the way for new projectionists.” His documentary charts how historically the profession has been one of apprenticeship and learning from doing. “They will, by necessity of the job, become preservationists as well as projectionists. They have to preserve what they’re handling now.” 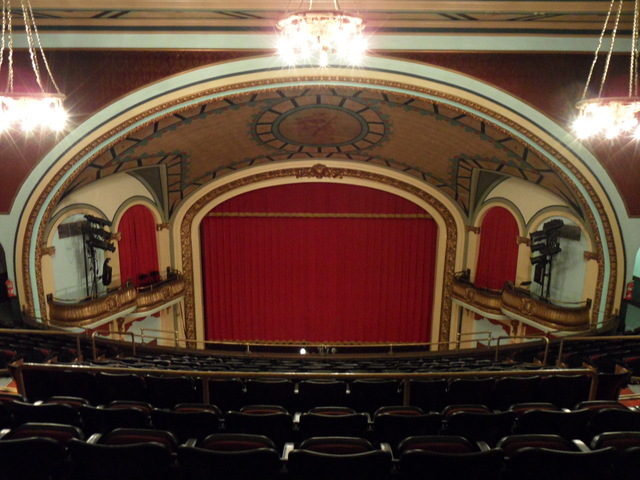