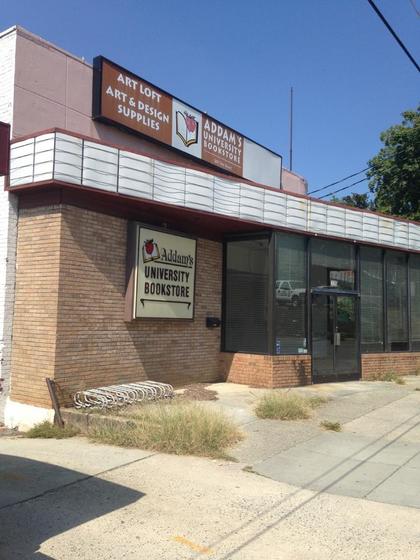 From the Triad Business Journal: The former Addam’s University Bookstore that borders UNCG has been sold to the university.

The building is at 326 S. Tate St. It was built in 1938 and is a cornerstone of the eclectic Tate Street business district.

According to the university, the building will be upgraded and used by the school’s College of Visual and Performing Arts, especially its theater department. The move is necessitated because of the planned demolition of the McIver Building, scheduled to be razed in May 2018.

The 130,000-square-foot McIver Building is used by 18 university departments, including the College of Visual and Performing Arts. It is being torn down to make way for the Nursing and Instruction Building, which is to be completed by the fall of 2020. Funds for the new nursing building were approved earlier this year by North Carolina voters as part of a $2 billion general obligation bond vote.

Charlie Maimone, UNCG’s vice chancellor of business affairs, said the university was interested in the former Addam’s University Bookstore building because of its size and close proximity to campus. He said planning for its renovation haven’t begun, but said members of the theater department as well as residents of the surrounding College Hill neighborhood will be asked to provide feedback.

“We want the neighbors involved in the design,” Maimone said. “We’re excited that they’re interested.”

Brian Burnham, a Realtor with RE/MAX Realty Consultants – Commercial Division and the listing agent for the Addam’s University Bookstore property, said the 6,353-square-foot building was owned by Glenn Hart and sold for $540,000. On the RE/MAX website, the asking price was $650,000.

Addam’s University Bookstore closed in 2014, but the building has an interesting history predating that use. According to Cinema Treasures, a website that chronicles the history of movie theaters, it opened as Victory Theatre and had a seating capacity of 1,100.

It remained in operation by that name until 1958 when it was sold and renamed Cinema Theatre. Dr. Hammond Bennett, the owner of the Janus Theatres and the Terrace Theatre at Friendly Center, bought the theater in 1976 and renamed it Janus Wings, turning it into a restaurant/movie establishment, according to Cinema Treasures.

It was sold again in 1980 and operated briefly as College Hill Cinema before going through another change in ownership in 1981 when it became the House of Pizza Cinema, a theater where patrons could enjoy pizza with their movie, according to Cinema Treasures.

According to the website, the theater closed in the mid-1980s.

Thanks for sharing this with us.

Wow, very nice designing for a new office. I like it and will include in my business plan idea. I am opening my new business and taking help from ogscapital.com/article/daycare-center-business-plan-example/ site for making plans. Without making plans I can’t run my business.

We can hope that Slung Low - Paid Internship is what we will like to go for them now. Just see buy powerpoint presentations that as this link will help you with many academic-related materials that you can share with others.