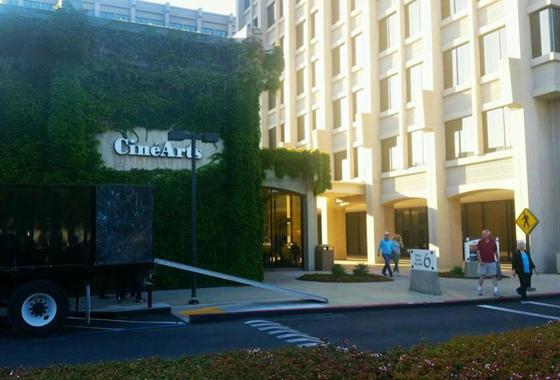 From the Mercury News: CinéArts will stay open for another two years after its parent company reached an agreement with Palo Alto Square property owners, city officials announced Thursday.

The theater at 3000 El Camino Real will stay open while Cinemark Theatres and Hudson Pacific Properties Inc. “undertake improvements to the building and assess the long-term future of the theatre,” the city of Palo Alto news release stated.

At the urging of city officials, the property owner and its tenant have continued negotiations in the past couple of months.

News of the theater’s closure surfaced as it neared the end of its lease in August.

Hudson Pacific will make improvements to the building as requested by Cinemark. The company also intends to make landscaping, amenity and other aesthetic improvements to Palo Alto Square.

The city had hoped for a long-term lease extension, Keene said.

“But the theatre will remain open and ultimately the economics of the theatre’s operations will determine whether CinéArts will remain in this location,” Keene added. “To see a longer lease extension in the future, our community will need to actively support the theatre.”

“The next two years are a window of opportunity to determine whether the theatre can operate in Palo Alto Square for the long term,” Gordon said.

Tom Owens, executive vice president of real estate for Cinemark, said the theater company applauds the efforts by Hudson Pacific and the city of Palo Alto to enable the theater to continue operations.

“We believe the theatre can stay in Palo Alto with the community’s full support, and we look forward to the opportunity to serve Palo Alto and the surrounding region,” Owens said.

City officials such as councilwomen Karen Holman and Liz Kniss and community members rallied to show support for the theater in recent months, collecting more than 2,500 signatures to petition the theater to stay open.

City officials had said that had CinéArts left, the building’s owner would have to find another theater tenant or request rezoning to allow for an alternate use.

Palo Alto Square was developed through a Planned Community zoning ordinance in 1969, allowing uses such as office space and a hotel that has since been amended.

The closure of CinéArts would have left Palo Alto with the Aquarius Theatre on Emerson Street, which also is a first-run theater that shows some independent films, and the Stanford Theatre, which shows classic movies.

Link to the story: http://www.mercurynews.com/2016/09/15/palo-alto-theater-to-stay-open-for-next-two-years/