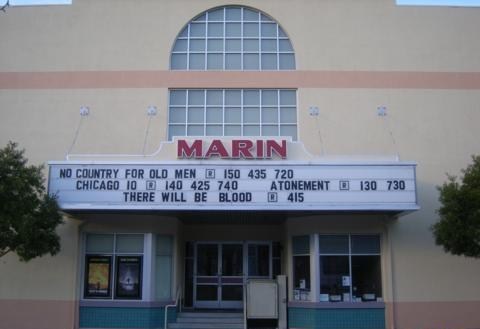 From marinij.com: A plan unveiled for Sausalito’s shuttered movie house is good news for city film fans — two theaters are part of the new design, as is a restaurant and upstairs office space for the Caledonia Street building.

Operations at the old CineArts Marin in the city’s downtown wound down in January after Texas-based Cinemark Holdings Inc. informed the building’s owners in late 2015 it will not renew its lease, citing poor attendance.

Sausalito Mayor Jill Hoffman formed a committee made up of residents, local business owners and city staff to work with the property owner to find ways to keep a theater at the location. The work appears to have paid off.

Now the design is going through the city process. The Historical Landmarks Board signed off on changes to the 14,000-square-foot building that was constructed in 1909. Next up is the Planning Commission on Oct. 5.

The new plan includes a restaurant and two theaters on the first floor. There had been three screens before.

One of the theaters would be set up to accommodate live performances and lectures, Bruce Huff, property manager, told the City Council Tuesday.

The larger theater would have about 75 seats and the smaller theater roughly 50. The seats would be plush, reclining and have more space for patrons. The movie theater rooms would show first-run and art films.

Offices would go in a second floor that had been used mostly for storage. Glass walls would be used around part of the restaurant and the building would be veiled in timbers, conjuring up images of the city’s waterfront and ships.

“It’s a design that adds to vibrancy and life of Caledonia Street,” Huff told the council as part of an informational hearing. He added that parking was available within a short walk of the building.

A theater and a restaurant operator have been identified by the building’s owners, but will not be named until the building work gets city approvals.

“We are right in the middle of this process,” said James To, the building’s owner. “We understand there is still a long way to go. We are looking forward to any feedback from the community, council members and the Planning Commission have for us.”

The original style of the building was Mission Revival. The building was constructed as the Tamalpais Pavilion with the ground floor serving as a garage to the hall above, according to the Historical Landmarks Board.

The structure may also have functioned initially as a livery stable with openings for a hay loft uncovered at the rear of the structure on the second floor. It was an automobile repair shop with a ramp from the first floor to the second floor allowing for car parking, according to the Historical Landmarks Board’s history.

Before World War II the second floor, called Langsam’s Hall, was used for basketball games, grade school graduations and private receptions. When Marinship was constructed, the present day Marin Theatre was installed in 1942 by the Blumenfeld Theatre Circuit as the Sausalito Theatre.

The building was owned by the Langsam family for more than 70 years. Pacific Theaters took over after the Langsams, then Century Theaters. In 1992 the venue was split into three theaters to offer more movie choices. In 2006, Cinemark purchased Century Theatres and took over operations. When Cinemark left it took projection equipment, screens and even the seats.

The new project might have dodged a competitive bullet when negotiations with Cinemark to bring a multiscreen theater to the Best Buy building in Marin City fell apart earlier this year. Ross Dress For Less exercised an option to nix the deal specifically for an entertainment venue, saying it would have had too much of an impact on parking at the center.

Way to small auditoriums. Need to be larger. Some people have bigger screens in their homes. Hope they can expand somehow and bring back a true movie theatre to Sausalito.