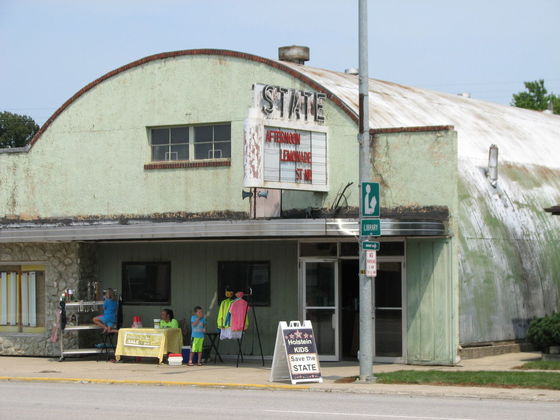 From The Sioux City Journal: The “Save the State Theatre” shirts made popular in Holstein during the past year must be changed.

The State Theatre in Holstein, you see, has been saved!

An ambitious $100,000 fundraising goal was reached and surpassed, allowing the Save the State Theatre group, working under the auspices of the Holstein Development Authority, to purchase and install what was necessary to get the 1927 theater on Main Street up and going again. A $50,000 movie projector will be installed this week. Movies might be showing as early as this fall.

The Holstein Development Authority purchased the theater from Fred Saunders, of Denison, Iowa, for an undisclosed amount. The structure, which became a quonset structure in 1948, an oddity in theater circles, was deemed sound by Midwest Cinema, the consulting group tapped by the local committee in the restoration effort. Thankfully, there was no water damage at the site, which closed for good in 2013.

“I’ve been in here hundreds of times during the past year and it’s so amazing how tightly this building was sealed,” said Kathy Vollmar, the committee co-chair. “I’ve not seen any mice and only a couple of crickets.”

Fellow co-chair Brenda Cronin mentioned a rabbit that seems to inhabit a space between the interior structure and the outer quonset shell in the back.

The lobby and theater sparkle with new paint, lighting and carpet, all completed in a 13-month span, thanks to fundraisers that range from a daily lemonade stand to sales of seats inside the reclaimed theater.

A fundraiser Sunday features pianist Richard Steinbach, of Sioux City, who headlines a “Piano & Pie” event at the Rosemary Clausen Center inside Ridge View High School in Holstein. Steinbach, the Briar Cliff University professor who has played at Carnegie Hall, will be joined by soprano Katie Pacza and flutist Christina Kjar-Hanson.

There’s a symmetry in having a concert in one new theater being held to breathe life back into an 89-year-old theater about six blocks to the west, all in a city of 1,409 residents.

The development is a testament to the can-do spirit of this community. The theater chairs, according to Vollmar, were trucked by VT Industries, Holstein’s largest employer, from Michigan and then unloaded by high school student-athletes.

“It’s been so neat to see how the community has reacted and joined in,” Vollmar said. “Whenever we’ve posted something about needing help cleaning or something like that, boom, 12 people show up ready to help.”

Residents volunteered to bake pies over the weekend to serve with ice cream and coffee at 2 p.m. Sunday, prior to Steinbach’s 3 p.m. performance. Tickets are $20 for adults, $10 for students.

One volunteer jumped into the restoration effort and we see it continue. Alyssa Dreeszen, a native of Lehigh, Iowa, remembered seeing the State Theatre when she first visited Holstein eight years ago. The facility seemed to be on its last legs.

“It looked then like it had just been closed,” said Dreeszen, who went on to study digital filmmaking at the Kansas City Art Institute. “When I was young, we used to go to Fort Dodge or Webster City to see a movie. It’s so cool a town like this has a theater.”

Dreeszen was so taken with the State Theatre, she offered to volunteer her services as the first manager. She’s currently planning theme months and show schedules, excited that the State, as an independent, won’t be obligated to show everything other theaters must.

“We’d also love at some point to make the balcony seating usable,” Dreeszen said, noting how the narrow space in the balcony has been cleared.

Vollmar said plans remain to refurbish the two cry-rooms for parents with young children. And, at a future date, the area behind the screen might be made into a party room. After a theater is saved, the thinking goes, there’s reason to celebrate.

Link to the story and photo gallery, at: http://siouxcityjournal.com/lifestyles/local/curtain-rises-for-saved-holstein-theatre/article_3d45817a-59de-5892-a1b0-4e449320ac1f.html 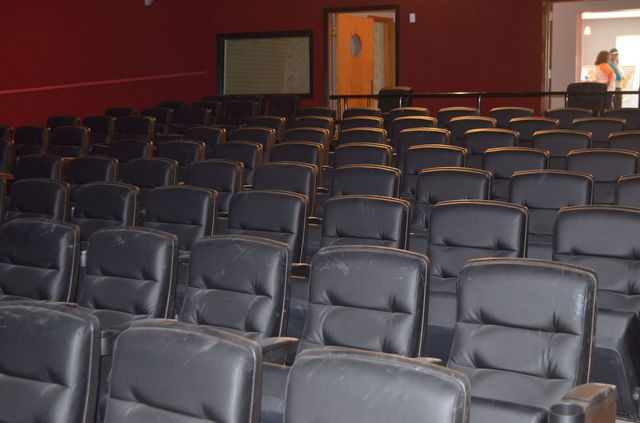 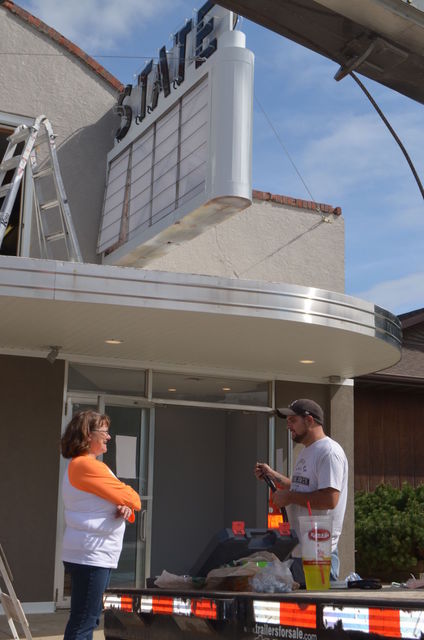