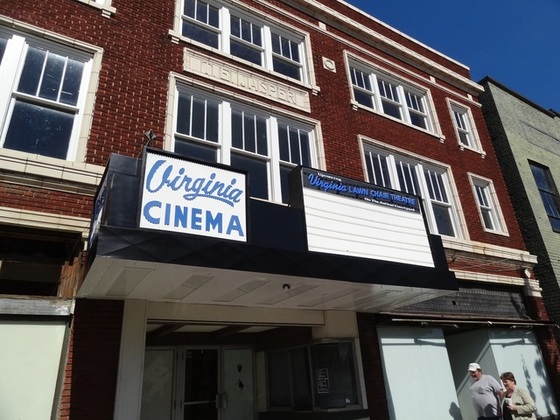 From the Commonwealth Journal: “Yes! Virginia” is phrase commonly associated with the gift-giving figure Santa Claus.

It’s also now associated with a wonderful present Somerset residents hope to find under their tree at some future date.

On Tuesday evening at the Pulaski County Public Library, the Downtown Somerset Development Corporation (DSDC) shared its vision for what a renewed Virginia Cinema theater might look like — and what kind of financial quest it would take to get there.

“Most everybody here has probably been at the Virginia at some point,” said Adam Richardson, chair of the DSDC Virginia Cinema committee, at Tuesday’s community meeting. “It’s something that we’ve all missed for a long time. Also, there’s a big generation of folks who have never had the opportunity to go to the Virginia.”

The Virginia Cinema, along with the old Kentucky Theater, was a hub of downtown Somerset activity starting in 1922, built by T.E. Jasper, who named the theater after his daughter. It continued on, even fighting through leaner years after the Somerset Mall opened with its own larger movie theater, until 1994, when the Virginia closed its doors — and, that same year — suffered a devastating roof collapse that left the inside in ruins.

Work has been done over the years to improve the outer facade of the building, but despite much talk and hope, efforts to fix up the interior and turn the theater into something fresh and viable have failed to produce much fruit.

However, the DSDC is hopeful the “Yes! Virginia — There Is a Future” campaign can make a successful push for the kind of fundraising needed to make this feel-good story come true, just like something out of the movies.

The DSDC is dreaming big. Talks with architecture firm Westlake Reed Leskosky have yielded an ambitious plan that would potentially turn the Virginia Cinema and its neighboring storefronts into a unique entertainment complex.

One key feature is retractable seats. This would allow for plenty of seating when a film is shown or the stage is being utilized, but for a wide open space in case of events that need more room — like a ball (yes, “ballroom” is one of the many possibilities associated on Tuesday with a revitalized Virginia). And they aren’t cheap fold-up chairs either — it’s a state-of-the art system for allowing quality seats to retreat backward into a space underneath the balcony, which would also be restored.

In fact — despite what Richardson noted were minimalist renderings provided by Kirby Stephens of the KSD design firm in Somerset — the idea is to get as close as possible to the original look and ornamentation of the Virginia, which is listed on the register of historic places and is eligible for accompanying tax credits. Restoring the Virginia with nostalgia in mind will allow those tax credits to be made possible, helping provide some of the crucial funding for the project.

The theater itself could prove extremely versatile. Long lists were made available of uses the DSDC foresees for a renovated Virginia, including concerts (Master Musicians Festival-associated events were mentioned specifically) and plays, event hall-type functions like weddings and dances, children’s theatre events, and of course films — ideally smaller independent films, the kind that don’t play at the major multiplex, a la Lexington’s Kentucky Theatre.

Considerations would also be made for concessions and alcohol, and potentially live recordings could be made and sold there. Films would be presented digitally, with up-to-date technology, and there could be officer or presentation space for local arts organizations, with some room available in the adjacent storefronts and on the third floor as well.

Of course, the basic clean-up and makeover is just part of the plan — or “Phase 1” as Richardson and fellow presenter Dave Weddle called it. “Phase 2” would incorporate the large restaurant space in the next-door building, which has previously held such businesses as Brandywine Studios, The Gondola, and 4 Girls Cafe.

If an enterprising restaurateur wanted to take over that space and cooperate with DSDC, the vision is to knock out parts of the wall for large garage door-type portals, where traffic from the theater after a show could pour right into the restaurant, or vice versa. Between the two buildings, where there is currently a narrow, empty alleyway, there would be a glass enclosure (perhaps not altogether unlike a smaller version of that in between the two First Baptist Church buildings on North Main Street) that would allow safe movement between the two spaces no matter the weather conditions.

That would be contingent upon finding the right buyer for the restaurant space, as it was noted that DSDC wasn’t looking to get into the restaurant business. Neither, said Richardson, does anyone there know anything about running movie theaters, meaning that finding the right entity or individual to actually run day-to-day operations at the Virginia would be paramount, likely involving hiring a director.

Of course, unlike with Santa Claus, this gift to the community won’t come free from the North Pole. There’s a steep price tag attached to this project.

DSDC provided line item cost estimates just for Phase 1, not including the restaurant attachment plans, for a total of $2,711,500 needed to make the new Virginia Cinema a reality. The steepest cost is for the retractable seating, at $700,000; other six-figure expenses include $200,000 for the clean-out and acquisition of extra space, $200,000 for electrical work, and $250,000 for theatre systems, including audio.

Richardson also presented a chart breaking down how fundraising would ideally go, with a target amount of $2,800,000.

DSDC would kick in $350,000 and local governments another $150,000, in this scenario. Federal funding and tax credits would account for another $600,000 (Richardson said DSDC would be able to sell off tax credits to other corporate entities), and naming rights for $500,000 (specifically mentioned were individual parts of the theater, including seats or rooms, up for donations — “We might sell bricks, we might sell shares,” said Richardson).

Foundations and grants account for $350,000 of the projected fundraising, with the remainder of $850,000 that will need to come from somewhere else — likely, support from a community eager to see the Virginia Cinema come to life again. Thus, the “Yes! Virginia” campaign is being launched to raise awareness and interest in providing the necessary funds to revitalize the theater according to these plans.

“That’s going to be a pretty significant challenge in and of itself,” said Richardson. “When you break it all down, it doesn’t seem as impossible. … I feel like the amount of money it would take to make the Virginia happen is minor (compared to) the impact it would have for Somerset, not only for downtown but for the community as a whole.”

That’s because the idea is to make the Virginia something that draws people to downtown as a nightspot and on the weekends. Weddle noted that in the recent past, people have packed up at the end of the work day and left downtown Somerset quiet in the evenings, and with new restaurants, bars and breweries in the area, that’s started to change some, but those entities can feed off each other symbiotically, allowing people to do multiple activities at different locations in the same night out on the town.

Weddle, who called the facility “a center not just a theater,” said that these plans are a “culmination of 20 years’ worth of work” on behalf of DSDC, which launched the “Save the Virginia” program many years ago just to keep the facility standing so that these plans would even be possible.

“How do we get the energy back on the street? How do we get people out there after dark?” he asked, “We do not want another false start. … We want to make a concerted effort to bring the Virginia Theater back into the grandeur that it needs to be.”

Parking issues wouldn’t be a problem in the evenings, with the DSDC parking lot and the judicial center spaces being available, said Richardson.

He also said that regular operating costs once the hypothetical new Virginia is up and going haven’t been determined at this early stage, but “in order to make this work, it’s got to be self-sufficient.” That could be through its own income or outside grants, or a combination of both.

“I hope you agree with me that ‘Yes! Virginia, there is a future,’” said Richardson, “but also remember that we need your help to make this happen.” 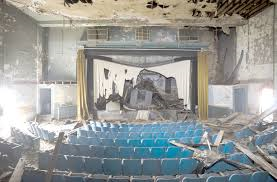 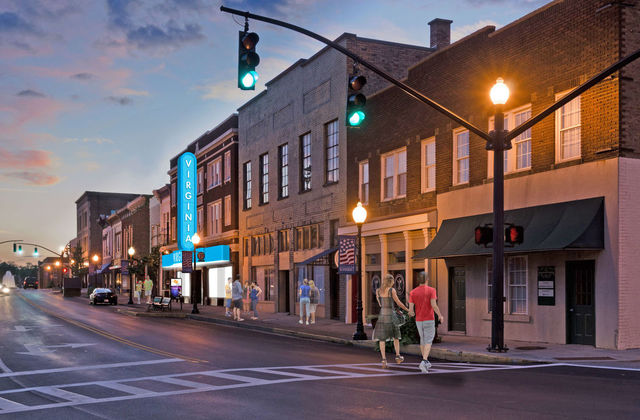 I am glad uk writings reviews ​are arranging cinema for residents of Virginia, all of us need some entertainment especially after being house arrested for two years due to a pandemic.