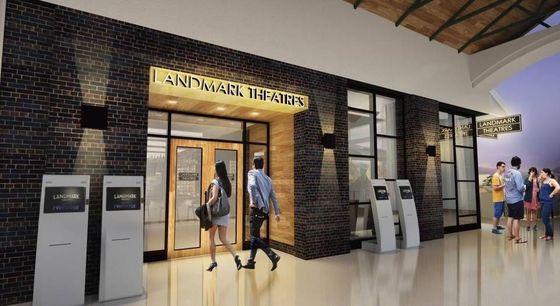 From Curbed Miami: The Landmark at Merrick Park, a 25,000-square-foot luxury movie theater, will open at the Shops at Merrick Park in December, the chain announced today, according to the Miami Herald.

It will be on the third floor next to Neiman Marcus, with leather chairs, stadium seating, laser projection, a full bar and lounge, and, most importantly, online reserved seating.

The Landmark project was approved by the Coral Gables City Commission after agreeing not to compete with the Coral Gables Art Cinema for movies. Both theaters are located on city-owned land and will be able to show the same films. Landmark will also make a $10,000 donation to the non-profit Gables Cinema for five years, starting in December. In today’s world of excellent home-viewing options on massive and affordable televisions the question is whether this fills a need with several options already in the area and a couple more in the pipeline.

There’s AMC Sunset Place about three miles to the south and a Cinépolis just over a mile away in Coconut Grove.

And they likely won’t draw folks form the heart of Miami, as there is a theater coming to Brickell City Centre and another opening just over the bridge.

Because of the retail store downturn, shopping center owners are courting alternative uses such as entertainment and restaurant tenants. This has been widely written about in the Wall St Journal, so theater chains now have an advantage when negotiating leases. Anchor stores are now passé….

“After agreeing not to compete with the Coral Gables Art Cinema for movies. Both theaters are located on city-owned land and will be able to show the same films”. So how, EXACTLY, do you not compete when you are playing the SAME films?