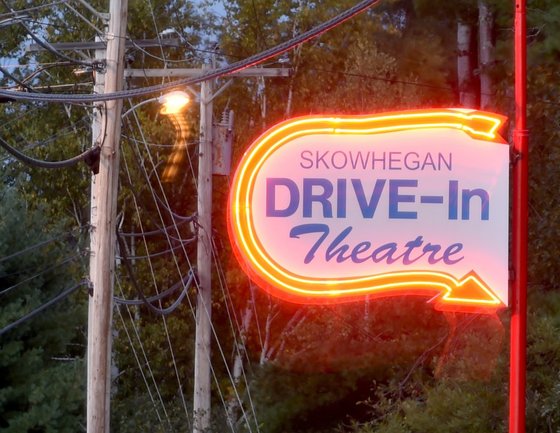 From CentralMaine.com: The reddish glow in the evening sky on U.S. Route 201 east of downtown Skowhegan is a signal.

It’s the Skowhegan Drive-In Theatre, which moved into the future this past summer when it converted to digital projection.

This week, theater owner Don Brown stepped back from the future and into the past with the installation of a replica neon sign that looks just like the original sign did when the drive-in opened in 1954, mounted on a red 35-foot pole.

“They took the old sign that had been lying on the ground and they made a pattern from that and they duplicated it,” Brown said Wednesday as he turned on the sign with its bright red neon arrow pointing to the refurbished ticket booth at the entrance to the drive-in.

Sign Services Inc., of Stetson, did all the work, paid for with just over $8,000 from the Skowhegan facade grant program. The white sign with blue lettering spells out “Skowhegan Drive-In Theatre,” with “theater” spelled the old-fashioned way.

“It was the last piece of the original theater that we had not rehabilitated,” said Brown, 53. “It had been there for so many years and so many people have asked us, ‘Are you every going to do anything with the sign?’ that when the opportunity to apply for the facade grant came up, we did.”

Hewett said the sign is real neon with “glass set-asides” that hold the neon and copper wire that keeps it all in place.

“It brings back a lot of memories for me,” Hewett said. “In the daytime it doesn’t really grab you as much; it’s the nighttime and that kind of reddish glow that comes off that gets you. I don’t think that there are very many of the neon signs that are left anymore.”

Brown, who lives in Felton, Delaware, during the winter, bought the drive-in theater in May 2012 from Doug Corson’s Encore Skowhegan Drive-In.

The drive-in has a capacity of 340 to 350 cars, set old-fashioned-style in semicircles with a standing pipe that once held the audio speakers. Sound for the movies now comes over the car’s FM radio at 88.3 on the dial.

There are now five drive-in movie theaters in Maine, including Skowhegan’s, according to the website DriveInMovie.com.

Two years ago, an estimated 357 drive-in movie theaters remained in the United States, a steep decline from the 4,000 or 5,000 that gave drive-in theaters entertainment status in the late 1950s and ’60s. Generations of families have packed station wagons with coolers, lawn chairs and kids in pajamas, and young lovers went out for a night of cinema under the stars.

Brown said he wants to continue that tradition while polishing up some of the nostalgia of the experience along the way.

“We went right through the building when we came here in 2012. Everything has been reproduced to be of the original design. It’s just been modified on occasion here and there for more contemporary standards,” he said.

Everything, including the concession stand, looks “pretty much the same” as it did in the 1950s, Brown said. He said two of the movies that ran this past summer were on the old 35 mm film, but the rest — a new feature every week — were projected using the new digital equipment.

“I think what we’ve done with the drive-in combines the best aspects of the present yet preserves certain vital elements from the past that made the drive-in appealing,” he said.

He said bringing the drive-in into the digital age was necessary for the business to survive; it was either digital or die. Hollywood studios were phasing out 35 mm film and switching production to modern digital. The sign, on the other hand, combines the element of nostalgia with the contemporary projection.

Two years ago, on the 60th anniversary of the opening of the drive-in, Brown was facing a $40,000 investment in new equipment and modifications or he would be forced to close. With donations from the community, including a Stephen King marathon of scary movies and a lot of his own savings, Brown finally took delivery of the new projector.

“It’s neon, and there used to be a neon sign out there,” Randy Gray, Skowhegan’s code enforcement officer, said Wednesday. “So good for him for doing it.”

Brown said the drive-in is closed for the season, but he’ll leave the sign’s light on for a while Friday and Saturday night as a signal that he’ll be back in the spring for another summer of movies under the stars. 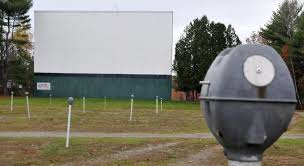