Derby, CT - Inside an Abandoned Connecticut Opera House With a Jail Beneath its Stage 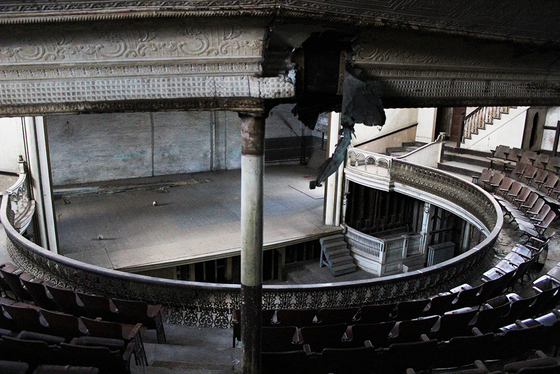 From Atlas Obscura: Discovering an abandoned, beautifully preserved opera house from the 19th century is thrilling enough. But imagine finding an old opera house that, for some mysterious reason, has abandoned prison cells hidden underneath the stage.

One such curious and beguiling building can be found in Connecticut. It completed its last production in 1945 and has been closed ever since.

Derby is officially the smallest city in Connecticut (at least, according to its own town leaders, who took that superlative as the town motto). Quaint, pleasant and friendly, and covering an area of just over five square miles of New Haven County, Derby has a current population of just over 12,000. The first mystery is why the smallest city in the state even had an opera house in the first place.

The answer is the the Industrial Revolution. Found at the intersection of the Housatonic and Naugatuck rivers, Derby was ideally situated for the new water powered gristmills that saw companies flock to the area, manufacturing everything from hoop skirts and corsets to brass items and pianos.

As Derby became more prosperous in the latter half of the 19th century, it did was many other self-respecting boom towns did in the U.S.; it built itself a grand, ornate opera house. Civic pride was tied to this kind of patronage. In Iowa alone, over 1,500 opera houses were built following the Civil War, almost all of which today, have been closed down and repurposed, torn down, or lost to fire.

And with so many opera houses being built, competition between neighboring cities was fierce, with local rivalries demanding that their new opera house had more gilt, crushed velvet and chandeliers. One such rivalry centered around this part of Connecticut. Just a few miles north of Derby is the town of Ansonia. Flush with money from its prospering copper industry, Ansonia, then a borough of Derby, built an opera house in 1870, despite having a population of just over 3,000. Not to be outdone, the officials of Derby (population also just over 3,000) sought to build one of their own. In a classic case of one upmanship, Derby hired the prestigious architect Henry Edwards Ficken, one of the creators of Manhattan’s illustrious Carnegie Hall, and the architect of Coney Island’s steel pier and the Bronx’s Woodlawn Cemetery.

Ficken designed the building in the Baroque Italianate style, complete with striking terra cotta exteriors and a stained glass cupola towering over the small town’s square. The building is so striking it was the first building in all of Connecticut to be added to the National Register of Historic Places in 1968.

Walking into the abandoned opera house today, the interior is a striking as the Florentine exterior is beautiful. A ground floor and two sweeping balconies, decorated with intricate wrought iron work, slope down to the old orchestra pit, with the 60-foot stage framed by a grand proscenium archway. The interior has remained surprisingly pristine in the cool dry air, just covered in a layer of dust that has gathered since the local fire marshall closed the doors for good in 1945. The opera house was named for local piano manufacturer, Charles Sterling. Evening entertainment in the Victorian home usually involved a home upright piano, and those found in parlors throughout America more often that not were made by Sterling in Derby. The Sterling Opera House opened its opulent doors in 1889, marking the occasion with a presumably less than cheery performance of James A. Herne’s play Drifting Apart, a temperance driven melodrama about the evils of drink.

That the first production in the opera house wasn’t actually an opera was not unusual. Indeed, in the countless of opera houses that sprang up all over the U.S., operas were generally rare. The entertainment offered was more commonly popular theatre, old time variety shows, vaudeville shows and public lectures, acts that traveled the country by the new prospering railroads that themselves fueled the boom towns.

The Sterling Opera House proved a roaring success, hosting performers of like Harry Houdini, Lionel Barrymore, John Phillips Sousa, and Amelia Earhart who gave a lecture there at the invitation of the local Woman’s Club in 1936. When pioneering director D.W.Griffith premiered his groundbreaking (and horrifyingly racist) film The Birth of a Nation, it was shown at the Sterling, much to the delight of Derby and presumably to the chagrin of Ansonia. (The rivalry between Derby and Ansonia was so intense that a petition was circulated in Ansonia to vote to become a separate town, a status it was granted the year Sterling Opera opened.)

Artifacts of the building’s heyday can still be found beneath the dust. The seats on the ground floor have all been removed, many lying under tarpaulins to the side, but the wooden seats on the two balconies still remain. Flipping up the wooden seats you can see the original wire racks underneath the seat, where gentlemen could store their hats for the evening’s performance. Two seats hold a particular secret, a peculiar stenciled star within in a circle that is thought to have been where a prize would be given out to the person sitting in the lucky seat. Some of the old background scenes, one depicting an enchanted forest and another a view of a seashore, rest on the stage. Over 100 years old, these would have been used as backdrops in long forgotten plays. On either side of the stage are two piano boxes, designed to hold Sterling pianos, one of which is still there and in fine condition.

One of the reasons behind the Sterling’s success was its exceptional acoustics; words whispered onstage could be heard at the back of the auditorium. On the right of the stage, facing the audience, is a trap door, that is thought to have been used by Harry Houdini in one of his escapology acts.

Immediately underneath the stage are a series of old dressing rooms. The walls still bear ghostly reminders of past performers thanks to old posters pasted to the wall. Names of old vaudeville performers such as Sampson the Strongman, or “Zelda the Snake, the World’s Greatest Contortionist”, are forgotten to history but were once amongst the countless other performers who toured the country.

One particular dressing room has something even more remarkable. Used by the dancing girls of the chorus line, some of whom left their own mark on the abandoned opera house by kissing the walls and leaving the imprint of their lipstick.

Incredibly, despite being nearly a hundred years ago, the bright pink kisses still remain on the wall.

There is something underneath the street, though, that sets this opera house apart.

Underneath the stage, with no sunlight, are a series of empty rooms and corridors. Peeling teal paint covers the doors, the glass windows stenciled with gold names such as “Mayors Office”, “Alderman” and “Deputy Commissioner of Charities.” The Sterling Opera House was built not only as a palace of entertainment, but also as the local civic center.

Despite the last staged performance occurring in the winter of 1945, the leaders of Derby used these offices for another 20 years.

The seamier side of public life was also part of the opera house basement—namely, city prisons and the police department. The row of jail cells sit in disrepair but the sliding doors still slam shut, echoing eerily throughout the abandoned opera house. Amongst those who were locked up here included captured members of the violent Italian organization La Mano Nera, or the Black Hand. It is quite likely that those incarcerated in the subterranean dungeon would have been able to here the singing and sounds of the orchestra performing high above their heads.

According to my volunteer guide, this eerie subterranean prison once briefly held Lydia Sherman, one of the America’s most notorious female serial killers. Known as the Poison Fiend, Sherman was the archetypal Victorian “black widows,” murdering 10 victims with arsenic, including three husbands and seven children, the youngest just 9 months old.

Sherman published her own memoir, in the lurid best seller Confession of the Arch Murderess of Connecticut. where she calmly and chillingly outlined how she put arsenic in her first husband’s oatmeal, to “put him out of the way, as he would never be any good again”, to dosing one of her children’s milk with more poison. Sherman would inspire a popular song;

Lydia Sherman is plagued with rats,

Lydia has no faith in cats.

So Lydia buys some arsenic,

And then her husband gets sick;

And then her husband, he does die,

And Lydia’s neighbours wonder why.

Exploring the Sterling Opera house, it became apparent that this had once been the focal point of Derby. But like so many other boom towns, once the local industry dried up, so did the audiences. The Sterling Piano Company folded in the 1920s, a movie theatre opened a few blocks away, and the cost of maintaining the building saw the fire marshal lock up the Sterling in 1945. Plans for to restore the opera house have been ongoing for a number of years. The exterior was restored in 2011, but the interior remains abandoned and unused. Local volunteers have been working to restore the opera house to its original glory and purpose, as an auditorium for the performing arts. Protected by being placed on the National Register, the Sterling could perhaps follow the success of the Goodspeed Opera House in Connecticut River, which opened in 1877, fell into disrepair but was reopened and saved in 1968 by local concerned residents.

Hopefully, it will rise again; there is almost no end to the fascinating bits to be found from touring the building. Along the dark corridor from the eerie cells is a small room, painted pitch black, with drainage troughs on the floors, and wire strung across the room, with rusted clips hanging off. This was the police photographers’ dark room, where crime scene photographs would have been processed. The floors of the police rooms are covered with old reports, crime scene write-ups and fingerprints. It is as if the Sterling Opera House was divided in two, with the bright gaiety of the theatre above stage, and the dark underbelly of the city operating below. 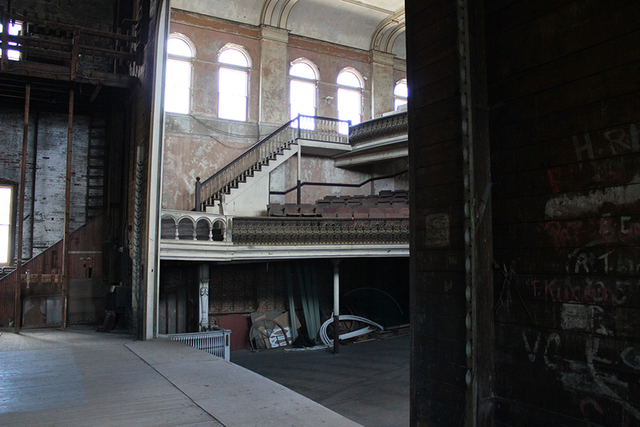 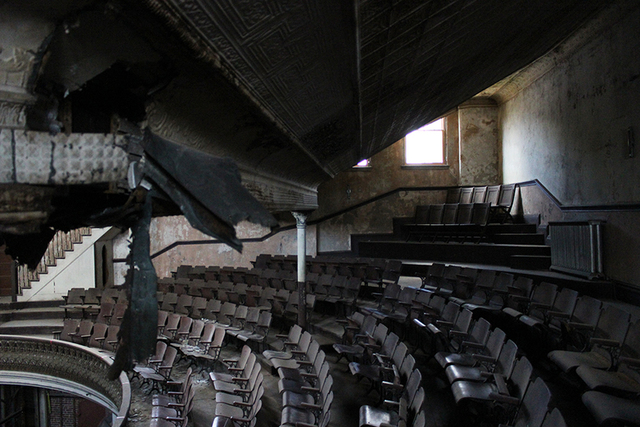