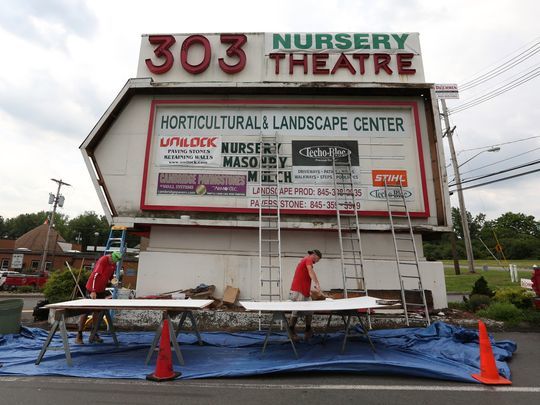 From the Journal-News: Their last picture shows were nearly 30 years ago, but signs of Rockland’s rich drive-in-movie past live on.

Two iconic signs – for The Route 303 Theatre in Orangeburg and the Rockland Drive-in Theatre on Route 59 in Monsey — advertise theaters that are long gone. The 303 drive-in closed in 1988; Rockland, a year earlier.

Their surviving signs are more than landmarks, they’re a reminder of a time when everyone liked Ike and Rockland was more rural, less suburban: More “Music Man,” less “The Secret Life of Pets.”

There are still signs of life where Rocklanders spent summer nights looking at flickering images from the comfort of their wood-paneled station wagons, kids in their pajamas crowding the back seats and plunking quarters on the concession-stand counter for something sweet.

•In Orangeburg, the Route 303 Theatre sign was recently refurbished, its bright red arrow restored to its former glory, advertising Organic Recycling’s nursery. •In Monsey, the Rockland Drive-in sign and its massive screen survive, as does perennial talk of plans to develop the 23-acre site. A decade ago, there was talk of putting up a Wal-Mart there. Now there’s a plan for a 600-unit housing development spread over more than three-dozen buildings. •In Blauvelt, on the site of the long-gone Nyack Drive-in, Golden Krust Caribbean Bakery and Grill has announced plans to build a $37-million factory, world headquarters and distribution center. It will occupy a spot on Route 303 where a driving range replaced the 9-hole golf course that was part of the Nyack Drive-in. The drive-in’s screen only came down in recent years, when FedEx moved its massive plant onto the site.

“At a time, he owned seven or eight theaters in the county, including the three drive-ins, theaters in Nyack, the Lafayette in Suffern, Stony Point, New City and two in Pearl River. Al was a major operator.”

The Monsey location of the former Rockland drive-in is overgrown to the point that trees nearly cover the screen, which still stands nearly 30 years after the movies stopped being shown there.

It has become a parking lot and was used as a staging area to hold thousands of chickens for the Orthodox Jewish community’s kaparot ritual, performed during the High Holy Days of Rosh Hashana and Yom Kippur. The site has also drawn homeless squatters.

When Tom Nevins told his Facebook friends he was fixing up the old 303 Drive-In marquee, it qualified as a major life event.

“I got 38 likes and tons of comments,” said Nevins, an Orangeburg. “Everybody said, ‘If that sign could talk…’”

“I think the first movie I saw here was ‘Blazing Saddles,’” he said as he and Brendan Siegriest puttied and painted sheets of plywood (in Dutchman red) to dress up the sign. “And everybody saw ‘The Planet of the Apes’ here.

“We’d sneak in,” Nevins says. “Us Orangeburg boys would sneak in from this side, through a hole in the fence and the gravel pits, and the Tappan boys snuck in under the big screen after crossing the log and the Sparkill creek. People from Jersey, from Hillsdale, tell me they used to sneak in here, too.”

According to NewYorkDriveins.com, a repository for drive-in history, the Empire State had 184 drive-in theaters between 1938 and 2009.

To see a drive-in picture show these days, you’ve got to travel.

If you want to go the distance, you can visit a drive-in opened the following year, the nation’s oldest continuously operating drive-in, just north of Allentown, Pennsylvania: Shankweiler’s Drive-in Theatre is marking its 83rd season.

Nevins remembers the movies, but also the things the drive-in became afterward: a flea market, a BMX bicycle course, and home to go-karts.

He’s not sure why the sign is still standing, all these years later, but he’s happy to re-wrap the marquee in bright red. Organic Recycling, which runs the nursery behind the Orangetown Highway Department garage, didn’t re-do the entire sign, just the outer shell.

The gregarious Nevins is tickled to get the assignment restoring the marquee for a place that looms large in his childhood.

“This is one of my greatest jobs,” he says. “I’m real proud to be working on this. It’s iconic, it’s nostalgic, it’s everything that we ever had here. You don’t appreciate a good drive-in until it’s gone.” 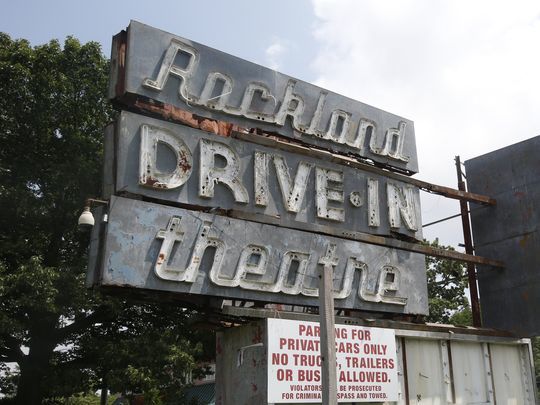 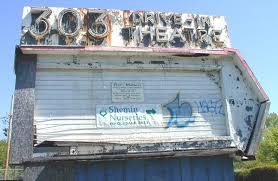