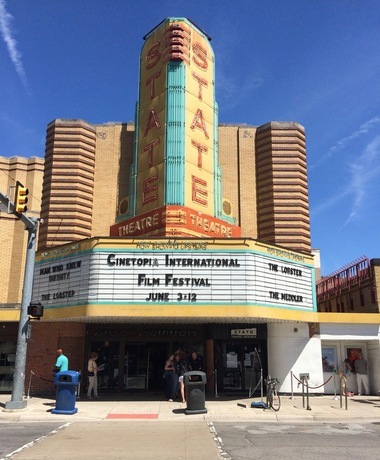 From MLive: The historic State Theatre in downtown Ann Arbor is getting ready to undergo a major restoration and transformation.

The movie house at 233 S. State St. will show its last midnight film this Saturday, Sept. 10, followed by a handful of additional film screenings next week, before closing for renovations for eight to 12 months.

The city’s Planning Commission voted Wednesday night, Sept. 7, to approve the plans, which include constructing a 2,000-square-foot addition on the south side of the building where there’s an alley enclosed behind double doors.

The addition, measuring 7.7 feet wide and 88.5 feet deep, will fill in the alley and house a new elevator, which is just one of a number of upgrades planned. The Michigan Theater Foundation is undertaking a large-scale interior and exterior renovation of the State Theatre to restore its art deco look and feel in conjunction with its 75th anniversary in 2017.

That includes restoration of the iconic marque and facade along State Street, as well as converting the two-screen theater into a “one-of-a-kind cinema space” with four smaller screening rooms, more comfortable seating and more leg room.

The project includes restoring and refreshing the art deco design of the entrance, lobby and restrooms as well.

The theater is in the State Street Historic District. The city’s Historic District Commission already signed off on the project, which has support in the form of funding from the Downtown Development Authority and private donors.

The theater was originally designed by architect C. Howard Crane, who also designed the Fox Theatre in Detroit.

Construction began in 1940 and the State Theatre opened in 1942. The first floor was originally clad in red structural glass panels.

In the late 1970s, the theater (originally a single screen with a main floor and balcony) was “quaded” and the interior was divided into four screening rooms, with the balcony level becoming its own floor with two screens. In the late 1980s, the first floor was converted to retail use, now housing the Urban Outfitters store, where remnants of the original theater still are visible. The second floor remains a two-screen movie theater.

In 1990, the yellow and red neon-embossed marquee was restored by Hogarth Management, which received a special merit award from the Ann Arbor Historic District Commission for the work.

The Michigan Theater, which had been contracted to provide film programming and marketing services for the State Theatre since 1999, purchased the State Theatre cinemas in 2014 to preserve and protect the theater.

Following the upcoming renovations, the new entrance will be located where a set of double doors currently separates the State Street sidewalk and the alley that is to be filled in by the addition, just south of the existing entrance.

“The elevator will be used to access both the mezzanine level, for concessions and restrooms, and the theatre level, which will be converted from two screening rooms to four,” reads a report prepared by City Planner Jill Thacher.

“A new main entry with shiny red metal panels will be located at the south end of the theatre’s front elevation, with double doors and a display window. The second floor of the elevator enclosure will face the street with clear glass, and the third floor will have dark-colored glass. The south-facing elevation will be clad in metal panels to match the color of the existing yellow brick.

“In addition, the yellow metal fascia that spans the front of the building will be removed to reveal and restore the original lightbulb locations,” Thacher’s report continues. “The metal soffit beneath the marquee will be replaced with matching materials and dimensions because of deterioration. The sign will be repainted and new neon installed as needed.”

The theater website states the reconstructed entrance area “will include a beautiful, well-lit staircase, along with a full-service elevator to bring guests to the restored mezzanine with art deco lighting, furniture and treatments.”

The DDA earlier this year agreed to contribute $200,000 in public funds toward the exterior restoration of the marquee and facade. The DDA’s grant was expected to be matched by more than $3 million in private funds.

The Michigan Theater Foundation indicated in its grant application that the theater on State Street drives more than 60,000 guests per year to downtown, in addition to the roughly 250,000 visitors to the Michigan Theater each year.

However, the foundation argues the theater currently looks shabby and underperforms.

Following the renovations, doubling the film selections by going to four screens, the foundation expects to see a notable increase in attendance.

“A renovated State Theatre will become a magnet for filmgoers throughout the region and solidify Ann Arbor’s national reputation as a home for world-class art house cinema,” Russ Collins, executive director of the Michigan Theater Foundation, said in a press release earlier this year.

The foundation describes the State Theatre as an important historical building that has been insensitively remodeled and has seen its architectural integrity neglected over the last 40 years.

“Pedestrian-level exterior architectural features were removed, significantly compromising the original art deco design. The marquee was cheaply ‘restored’ in the 1990s and is now faded and in ill repair,” the foundation wrote.

“Using the expertise acquired in restoring the Michigan Theater over the past 30 years, we will honor C. Howard Crane’s Art Deco design to preserve this architectural icon for many decades to come.”

Along with more accessibility features for people with mobility, hearing and sight impairments, the project also is expected to include updated movie projection and sound systems, offering a state-of-the art movie-going experience.

Films playing at the State Theatre this week and next week include “Don’t Think Twice,” a comedy/drama about a New York improv group; “Southside With You,” a romantic retelling of the summer day in 1989 when a young law associate named Barack Obama tried to woo lawyer Michelle Robinson; “Morris From America,” a fish-out-of-water comedy about a young teenager who has just relocated to Germany with his single father and fancies himself the next Notorious B.I.G.; and “Eat that Question: Frank Zappa in His Own Words.”

Thursday, Sept. 15, is the last date with any show times listed on the theater’s online schedule. 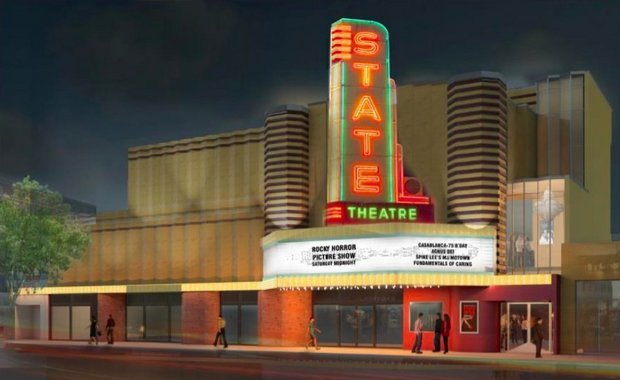